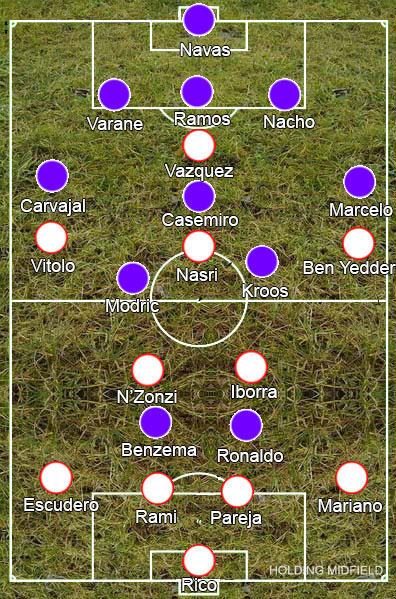 After extending their unbeaten run in all competitions to 40 games by moving past Sevilla in the Copa del Rey on Thursday, Real Madrid had every right to be confident of putting some distance between themselves and the chasing pack at the top of La Liga. Nevertheless the hard work had been done in the first leg and the capital club only mustered a 3-3 draw in the return, leaving Zinedine Zidane wary of a strong Sevilla side putting in a good title challenge under the stewardship of Jorge Sampaoli.

As the galactico of galacticos, Zidane is one of few men on the planet capable of commanding any authority at Real Madrid. Thankfully he’s been good value for it so far, showing a willingness to experiment and at times a pragmatism that would have seen others chased out of the Bernabeu – an unquestionable success so far despite still being a relative novice at coaching. The Frenchman displayed his happiness to tinker on Sunday, lining his team up in a 3-5-2 formation while Sampaoli went for a 4-2-3-1.

The extra defender put Madrid on the back foot from the off. They would attempt to press – one of Toni Kroos or Luka Modric stepping up to indicate to Cristiano Ronaldo and Karim Benzema to close down defenders ahead of them – but with few attackers it was rarely successful as the midfielders behind them were rarely able to provide full coverage, making them easy to pass around.

This failure in pressing meant that Madrid generally had to retreat back into their own half, where they defended more successfully.

Sevilla nearly always looked to attack down their left side with short passes however it rarely amounted to much. The moves were generally too slow to get in behind Madrid’s defence and with a back five the league leaders had plenty of cover. The available space was all in midfield but Real’s midfield trio all regularly came across to box Sevilla in on the wing and cut off access to the middle.

One would close down the man in possession, one would cover and the other would try to cut out the options to pass backwards, isolating the man on the ball on the wing. Moving the entire midfield over into a narrow part of the field left most of the width of the field for Sevilla to attack but Madrid made it difficult for them to actually do so – the player can’t easily pass inside, can’t pass backwards for a player in a better position to do so and while they could flick the ball over the heads of the Madrid midfielders into the space this would be slower, less accurate and more difficult to control than a pass along the ground, meaning a Madrid player is likely to cut it out anyway. While this was undoubtedly a clever solution to a problem for Madrid, Sevilla didn’t help themselves: they were always slow in attack, never making it difficult for Madrid’s defenders to adjust or find cover.

Although Madrid were very comfortable, they were still being pinned back by what should be considered an inferior team. Despite some pressure from Sevilla’s attackers, Madrid’s quality on the ball meant they rarely struggled to play the ball out from the back – Modric and Raphael Varane looking particularly calm and Sergio Ramos excelling in a libero role in the middle of the back three. The problem arose from their lack of a target once they had escaped the pressing of Sevilla: Ronaldo and Benzema were isolated up front, and the wing-backs were in difficult one-in-one match-ups. Benzema was willing to move wide and help overload the right side with Dani Carvajal but this only isolated Ronaldo in the centre further, meaning while Carvajal was more likely to get into good crossing positions he had worse targets to aim at. It could be said Madrid were too slow in their passing just as Sevilla were, however the bigger issue was simply the lack of numbers in attack.

The match wasn’t too dull but it did look like it was drifting to a 0-0 draw until a penalty for Madrid broke the deadlock. Now in need of a goal to rescue any points, it raised the pace of the game with Sevilla pressing harder and moving the ball quicker, giving Madrid some space to counter into. Nevertheless there still weren’t any real chances – the home side only equalising when Ramos headed a free-kick into his own net. Sevilla kept up the pressure and took the lead after snatching possession at a Madrid throw-in and substitute Stevan Jovetic getting a shot away, with some poor positioning from Keylor Navas playing its part.

Top of the league with a game in hand, Madrid had enough of a cushion to justify the tactical experimentation. It obviously backfired, ending the unbeaten streak, but for a few errors it probably would have been extended. Although his team were second best, Zidane may well look at the 3-5-2 as a good option when he wants to protect a lead, especially with a bit more more practice. Meanwhile Sevilla clamber closer to the league leaders despite putting in a poor performance.