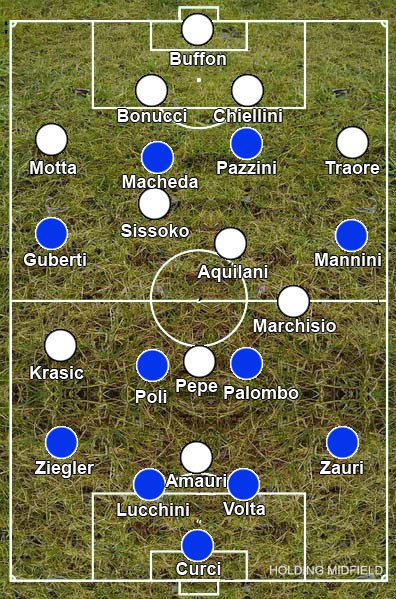 Both clubs went into the game on the back of a poor month, with Sampdoria probably the favourites, having lost just once at home this season, while Juventus haven’t won away since December 5th and are struggling with a lengthy injury list.

Domenico Di Carlo set up Sampdoria in a pretty standard 4-4-2, while Juventus lined up a slightly more complicated 4-2-3-1.

With both teams pressing feistily, the game was rather scrappy early on and the clashes resulted in a rather injury-plagued opening, with Armand Traore and Stefano Lucchini replaced by Fabio Grosso and Pietro Accardi respectively.

With Claudio Marchisio’s tendency to drift inside, the width on the left should have come from the overlapping full-back; 33 year-old Grosso simply doesn’t have the energy to bomb down the wing like Traore would, and, although he was very good defensively and did attempt to get forward on occasion, he hampered Juventus’ attacks. This was particularly annoying for Juventus as Luciano Zauri gets drawn up the pitch too much – Alberto Aquilani got in behind him early on and Amauri was drifting towards the left whenever he moved up the pitch, but having a full-back storming into this space would have been a lot more useful for Juve.

Instead, Milos Krasic was given the task of providing width. He did a good job, using his pace to easily get past Reto Ziegler, but his crossing was indifferent and he could have done a better job by dribbling into the penalty area more, although the logic was sound, with Amauri an aerial threat.

Both teams tried to keep the passing short, but Amauri was occasionally used as the target of long balls, as was Sampdoria’s left winger Stefano Guberti, often receiving diagonal passes from the right flank. Although right-footed, Guberti generally looked to keep the width for Sampdoria and did an decent job, however this impeded Ziegler’s ability to get forward, although, when he did, he often gave the ball away cheaply.

With their extra man in midfield, Juventus did a better job of compressing the space between defence and midfield than Sampdoria, ensuring Federico Macheda and Giampaolo Pazzini didn’t have any space to drop into, while also offering defensive support to their full-backs. Too often early on, Andrea Poli had attempted to double up on Krasic and left Simone Pepe or Marchisio free in the middle. Having said this, Aquilani didn’t have a great game and clearly prefers playing alongside Felipe Melo to Momo Sissoko in the middle.

Eventually, Juventus changed to a 4-3-3 when they brought Alessandro Del Piero on, with him going left, Pepe right and Marchisio moving into his favoured central position. This didn’t really change anything though.

The game was low quality and although some chances came later on, most likely through tiredness, it remained scrappy all the way through. It wasn’t a particularly bad game for either team, but it certainly wasn’t good either, and neither coach will be happy to have missed a chance to build some momentum.