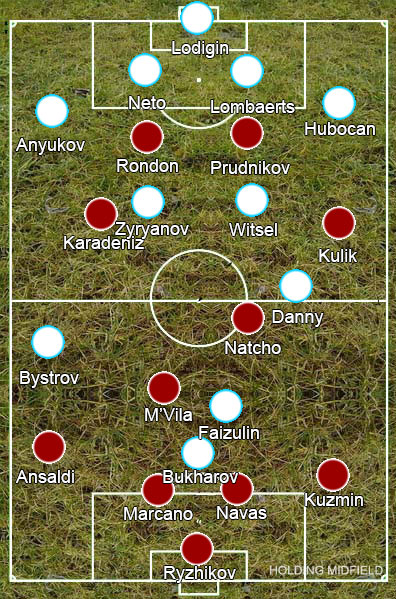 While many other European clubs are being nicely eased back into the football season with pre-season opportunities to spread their brand in far-flung corners of the globe, Russian clubs have had to begin theirs in the sweltering heat to make way for the gruelling winter break. Both clubs got off to low-key starts – Zenit beating Krasnodar 2-1 and Rubin drawing 1-1 with Kuban Krasnodar – and lined up in formations roughly resembling 4-4-2s.

Kurben Berdyev’s team was a much simpler set-up, with Yann M’Vila permanently station in front of the defence, Bibras Natkho acting as a link, and Vladislav Kulik and Gokdeniz Karadeniz supporting the high up strikers, and the latter sometimes coming into the middle on his right foot to make space for Cristian Ansaldi to overlap in more extended passing moves.

The roles of Zenit weren’t quite so clear cut. Aleksandr Bukharov was the main frontman with Vladimir Bystrov wide right supporting him, but Viktor Faizulin was playing in some kind of floating role that meant he frequently dropped deep into midfield or pushed up very high next to Bukharov. As it was never really clear where he was meant to be, he was largely unsuccessful, unable to be relied upon to come back when Zenit had to defend or to push forward when they needed more men in attack – forever either pushed right up or coming very deep, but never making use of space in that gap in between.

Out to the left, Miguel Danny played a similar sort of role to what Faizulin was presumably meant to be doing, dropping deeper when Oleg Kuzmin ventured forward or Zenit’s deeper players were struggling to get it forward and taking on Rubin defenders higher up the pitch. Zenit’s early goal came from this: Danny picking the ball up on the left, running at Kuzmin, Kulik and M’Vila before laying it off for Bystrov to play a first time cross into the middle, which the Portuguese finished in the scramble.

Behind them were Konstantin Zyryanov and Alex Witsel, both of whom seemed to struggle with their positioning. Zenit generally looked to sit deep when defending, but as they often had two players high up the pitch against Rubin’s defence, they made it difficult for them to get the ball out, forcing Natkho backwards and bringing Zyryanov and Witsel up the pitch with him. This created a gap between the midfield and defence for Salomon Rondon or Alexander Prudnikov to drop into, bringing Zenit’s defenders out of their defensive line. Rubin seemed to be focussing on playing through their wings, meaning they rarely made good use of this weakness but the disruption to the backline did mean Zenit’s defence didn’t look too strong in the air.

At half-time, Anatoliy Tymoshchuk replaced Nicholas Lombaerts at left-back for Zenit with Tomas Hubocan moving into the middle, which made it easier for Zenit to switch flanks, bringing the previously anonymous Aleksandr Anyukov into the game more, while Rubin switched to a 4-4-1-1, bringing on right-winger Alisher Dzhalilov for striker Prudnikov, Kulik moving into the centre of midfield and Karadeniz into the attacking role ahead of him. Five minutes later, Karadeniz scored after getting some space between the lines, but more importantly taking advantage of some poor defending, and Zenit changed their gameplan – with Faizulin moving out to a more suitable left wing role, Danny was allowed to roam in the middle, giving them someone to stretch play more naturally on the left and link play properly in the middle.

After another ten minutes, Hulk entered the fray and added more flexibility – far happier than Bukharov had been to come short or wide. At last, Zenit had control over the game despite no longer having the lead. With ten minutes to go, Aleksandar Lukovic was brought on for Bystrov, moving Tymoshchuk into his natural holding midfield role and freeing Witsel to join what was now a fluid attack more in keeping with Luciano Spalletti’s style of play. They seemed to be edging closer and closer to a goal but looked forced into settling for a draw when Anyukov went off injured with seconds of injury time left to play. The game restarted and moments later Rondon had put the ball in the Zenit net with a well-placed header.

It was a game that unfolded in the reverse to what it should have done. Zenit took the lead with a rare moment of quality during a first half where Rubin had the better of them, they conceded a goal just as they were making the changes to make them the superior force in the game, then they conceded in the final seconds when they were the better side. Funny old game.