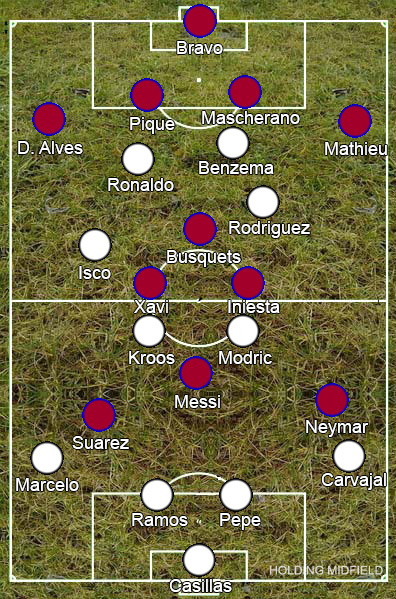 The latest edition of football’s greatest rivalry featured a managerial Clasico debut of Luis Enrique – a man who had his fair share of Clasico appearances for both sides as a player – but all that experience counted for little as Carlo Ancelotti outfoxed his younger counterpart.

The pre-match focus was on another debut: Luis Suarez finally returning from his ban for biting Giorgio Chiellini to start as the right forward in a 4-3-3, with Jeremy Mathieu chosen over Jordi Alba at left-back and Xavi continuing in place of Ivan Rakitic. Real Madrid made two changes to the side that thrashed Liverpool: Dani Carvajal and Sergio Ramos replacing Alvaro Arbeloa and Raphael Varane in their 4-4-2.

Enrique’s men had the better start, opening the scoring after just three minutes when Suarez hit a crossfield ball to Neymar to cut inside and finish on his right. Toni Kroos and Luka Modric have been a good partnership so far for Real Madrid despite neither being a natural holding player, relying on good organisation to defend, but Barcelona’s goal highlighted their defensive frailties. Lionel Messi shrugged off a weak challenge from Kroos to move the ball forward into Madrid’s half, while Neymar had so much room to charge into inside because of Kroos’ failure to get back and Modric having to cover Marcelo after he missed a tackle. It was still a goal that few teams would have the talent to score, yet Madrid didn’t make it in any way difficult for their opponents, and not for the first time.

Nevertheless, it was immediately clear that Real had the upper hand. The narrower and higher positioning of Barcelona’s wide attackers – meaning they could easily be categorised as playing a 4-4-2 diamond seeing as Messi constantly drops off the frontline – has meant there’s a much greater impetus on the midfielders to cover the full-backs. They are simply not good at it though – the pressing game of Pep Guardiola went a long way to covering the defensive deficiencies of Andres Iniesta and Xavi, but now that’s gone both are suffering. Usually they would make up for it with their attacking displays, yet the pair are reluctant to get forward knowing it’s their job to cover, so remain stuck in the middle doing both jobs poorly.

Sergio Busquets is obviously far superior defensively, but the stretched midfield three leaves him isolated in the middle and he’s had a terrible start to the season. Much like Pedro Rodriguez, Busquets was constantly talked up as under-appreciated to the extent that he’s probably overrated. He was one of the world’s best performers in his role, yet it’s often overlooked that it might have been because he was so perfectly suited to the system. Put him in any other team in the world and he probably wouldn’t reach anywhere near that same level, unlike someone like Javier Mascherano or even Thiago Motta. Now that the system’s been altered, Busquets’ form has fallen dramatically.

Still, with all these players holding back, you would at least expect the full-backs to make use of the cover and bomb on. Dani Alves has faced heavy criticism recently and the Clasico won’t help. Alves providing width from deep was a key part of Barcelona at their best, but against Madrid he barely ventured forward at all. To his credit, Mathieu ventured forward more on the left, but his selection over Alba was nonsensical – he’s a good ball-playing central defender yet he’s distinctly average on the ball for a full-back. It might be that he was selected as a safer defensive option, but, if that was the case, why set up in a way that relied on full-backs to provide the attacking thrust? Barcelona were curtailing the attacking of some of the world’s most creative midfielders to allow for lung-busting runs from a natural centre-back who smokes.

By contrast, Madrid’s full-backs were superb. Carvajal was dominant on the right, but Marcelo really stood out due to his understanding with Isco. The young Spaniard would drop in alongside Modric and Kroos and allow Marcelo to overlap high on the left, while Cristiano Ronaldo or James Rodriguez could drift into that inside left area he had vacated. Barcelona were unable to deal with Marcelo’s runs, riding their luck particularly in the opneing 15 minutes, but it wasn’t until the 33rd minute when Gerard Pique stopped a Marcelo pull-back with his hand that they were punished – Ronaldo scoring the resulting penalty.

This interchange of positions was illustrated perfectly in the build-up to the penalty:

A turnaround in how the two teams defend also helped lead into Real’s dominance. At their recent heights, it was Barca who would defend tirelessly from the front and Real who would cater to their Galacticos’ disdain for defending, but the two have reversed strategies now. Barcelona’s pressing game has been on the wane for several years now, linked to their concern for Messi’s fitness, although Real have only adopted theirs recently. With Iker Casillas no longer dependable and the Kroos-Modric partnership not the most defensively sound, it makes sense that Madrid want to cut out attacks before it gets to these areas, so they instead make it difficult for the ball to played out from the back.

However, once again Barcelona shot themselves in the foot. Their out-of-form midfield’s failure to move the ball forward meant Messi was constantly dropping very, very deep into midfield to pick the ball up. This has been a constant issue with playing Messi as a false nine: while very useful when he picks up the ball in this space and looks to dribble past players, when he just looks to join in with the short passing of the likes of Iniesta and Xavi, it means that Barcelona lose their focal point in attack. While obviously a far superior player, there’s a definite case to be made that Messi isn’t as good a player as someone like Francesco Totti at playing the role. Roma’s captain has the ability to drop off and create but a better appreciation of when to stay in attack than Messi, who too often goes into midfield and never heads back up front. A lot of the time, Totti dropping off into midfield is as much about creating some space for himself when someone follows him to make up for the fact that, at 38, he can’t rely on pace to get ahead of players anymore.

Previously it had been left up to Alexis Sanchez to make up for this by making diagonal runs behind, but he has been sold on so Barcelona could upgrade to a more natural man for the role in Suarez. Although clearly not match-sharp, Suarez looked lively at the start of the game but this soon faded as Messi dropped deeper and deeper, forcing Suarez into a more central role that ensured he never saw much of the ball.

With Messi in midfield, Suarez cut off, Dani Alves not pushing forward and Mathieu just simply not very good at attacking, Real Madrid were able to stay compact and narrow in midfield and press well, breaking up Barca’s rhythm. Only Neymar provided any spark to Barcelona’s attack but he couldn’t win it all alone.

Shortly after half-time, Pepe scored a header from a corner to put Madrid into the lead. Set-pieces have been a long-standing weakness for Barcelona and is the price they pay for their preference for diminutive, technical players. Nevertheless, the benefits of that policy weren’t on show. They barely had a scrap of a chance for the rest of the game, while Real streamed forward whenever they reclaimed the ball, scoring a third with a fine counter-attack. Even the introduction of more natural width in Pedro in place of Suarez did nothing to change their fortunes.

This is Barca’s first loss and goals conceded in the league, but not the first time they have showcased these problems. Both times they have come up against top quality opposition – here and Paris Saint-Germain – they have failed the test. They may well continue to do well in the league because domestic competitions are primarily about beating the dross, but there needs to be changes if Barca are to flourish in the Champions League.