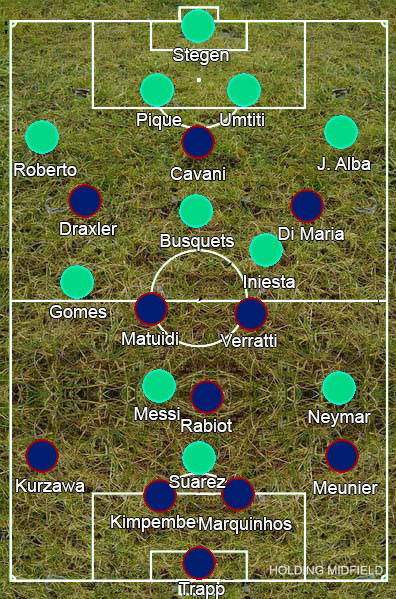 There was little romance in the air as Barcelona visited Paris for the return of the Champions League on Valentine’s day. Neither side are setting the world alight domestically – Barcelona falling behind Real Madrid and scrapping with Sevilla for second while PSG, who finished 31 points clear last season, are struggling against Leonardo Jardim’s Monaco and Lucien Favre’s Nice in Unai Emery’s debut season in France. With Emery brought in on the back of several Europa League successes with Monaco and Barcelona the dominant force in the Champions League over the last decade, the world’s most prestigious club competition could provide rescue from some tricky seasons for both teams.

Emery set up his team in a 4-3-3 whereas Luis Enrique went with something a bit closer to a 4-4-2 with Lionel Messi tucked infield closer to Luis Suarez and Andre Gomes pushed a bit further to the right than his midfield teammates.

Both teams looked to press high initially, however PSG were much better at it due to their structure. With Edinson Cavani staying on Sergio Busquets, the ball would typically head to one of the centre-backs, who would be closed down by Angel di Maria or Julian Draxler and Cavani would push up against Marc-Andre ter Stegen. With the Parisian midfield stepping up behind, there was little way to pass it out and it was now harder to change the angle with everyone on that first line of ter Stegen, Gerard Pique and Samuel Umtiti under pressure. The full-backs were the closest things to free men but usually required long aerial balls to reach and PSG’s midfield found it easy to put them under pressure and force them into giving the ball away.

In contrast, Barcelona’s pressing was easy to break through. PSG played little triangles in one section of the pitch, dragging Barca’s players into the area before hitting where the space had opened up. In the opening stages these were just long balls over the top that got their attackers running straight at the Barca defence, but as they settled into a more sustainable pace they would drag Barcelona over to one flank before switching play, or pull Andres Iniesta and Sergio Busquets forward then take advantage of the gap that would open up between the lines.

Birthday boy Di Maria got them the lead through a free-kick 18 minutes in and it was now up to Barcelona to break them down. They never came close. This game looked like the end result of a series of changes that have taken place since Pep Guardiola left the club. Guardiola’s position play style sees teams move up the pitch as a team – it means that while they may get from one end to the other slower, the man on the ball has plenty of passing options and, should he lose it, plenty of teammates nearby to immediately help win the ball back. Enrique’s Barcelona are a lot more direct, which has its benefits: having the ball go from back to front quicker means you have Messi, Suarez and Neymar all attacking before the opposition can adjust. However it also means they don’t have as much support from behind them and the lack of compactness means they have to cover a lot more ground when defending.

They have often circumvented this by depending on the individual quality of that front three to get them out of trouble but here PSG squeezed them out of it. Messi especially struggled to even get on the ball as Adrien Rabiot would stick very close to him whenever he wandered into his space and Blaise Matuidi looking to block the passes from being played into his feet.

Barcelona looked lethargic and rarely offered any support for the man on the ball, making it easy for PSG to harangue them into giving it back, while their lack of defensive compactness made it easy for PSG to break through. For such a comprehensive defeat, PSG didn’t particularly have to tailor individual instructions to Barcelona’s game – they just had to keep tight, quick and combative and Barcelona had no reply.

Enrique will rightfully face intense criticism for the match, but he isn’t solely to blame. This shift away from Cruyff’s passing principles has gone right through the club, with an obsession with winning at youth level coming at the expense of the smaller technical players who have made Barcelona great, replaced by bigger, more athletic youngsters. Given Barcelona have all but perfected that passing style over several decades, a move away from it is as much self-sabotage as anything else.