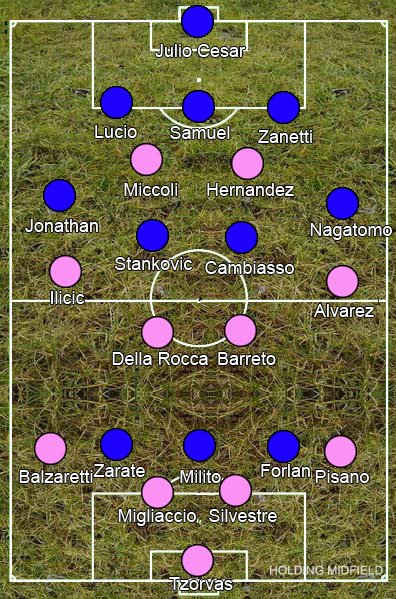 Having lost several key players over the summer and sacked their new coach Stefano Pioli after just two months without playing a single league game, replacing him with unknown youth coach Devis Mangia,Â  it was fair to suggest that Internazionale may have been favourites for this one. Evidently, things weren’t that simple.

Gian Piero Gasperini set Inter up in a 3-4-3, while Palermo appeared to play into their hands with their 4-4-2. Of course, shape only provides a basic framework and it was the Sicilians who took control of the game. With Palermo pressing very intensely from the front early on, Inter struggled to get the ball forward and Abel Hernandez almost scored with a header after Fabrizio Miccoli pounced on a defender early on.

They also looked to target the wings, particularly new boy Jonathan – a good plan against a 3-4-3 given it either stretches the back three if the wing-backs attack, or leaves them narrow if they stay back. Josip Ilicic and Federico Balzaretti would regularly link up down the left, while Miccoli would frequently drift out to the left wing for counters.

Inter didn’t look certain defensively either. The front three remained high, meaning Palermo’s full-backs could easily pass out to the midfield without the forwards blocking them. Inter’s midfield were having to move higher, making them easy to pass around, especially with Ilicic happy to cut inside, while their defence’s high line was regularly exploited. To sum up consisely: the attack weren’t given good service, the midfield were outnumbered, with more of the players going to a defence playing an unsuitable tactic.

Regardless, a goal from a corner gave Inter the lead against the run of play. After the goal, they made some changes to allow them to take control as well as the lead. Diego Forlan now tracked Balzaretti deep into his own half, meaning him and Ilicic could no longer outnumber Inter’s right hand side, while the introduction of Wesley Sneijder for Mauro Zarate gave Inter a link between the midfield and attack.

The game appeared to be set up for Inter to win despite not playing well, but that changed when the ball was played behind the defence for Miccoli to finish – another poor defensive line playing him onside. Momentum swung back round again when Inter scored via another set-piece, this time Diego Milito scoring a penalty, but a great passing move by Palermo allowed them to equalise again, although admittedly much of the credit must got to Inter’s still awful defence.

Inter had got a greater footing in the game now, but Palermo still looked more likely to score, their attacks looking more incisive coupled with lots of dangerous counters. Regardless, it was a set-piece of their own that gave Palermo the lead, Miccoli hitting a great free-kick past a haphazard Julio Cesar, then Mauricio Pinilla sealed it with a long-range strike, which Julio Cesar bizarrely didn’t even attempt to save.

Forlan gave Inter a lifeline, but Palermo saw out the game for a deserved three points. They pressed very well and passed even better, while Inter looked lost and didn’t show the defensive solidity to make up for it. Gasperini clearly needs to make some changes to his side, while the season might be looking better than expected for the Rosanero.