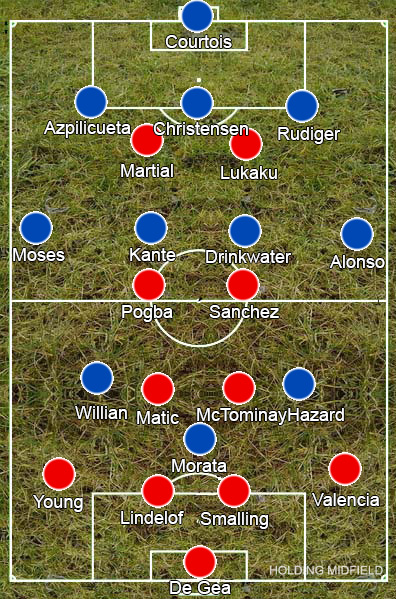 Having exchanged barbed comments throughout the season, this game was unsurprisingly billed as a grudge match between Jose Mourinho and his successor at Chelsea Antonio Conte, but both men have bigger things to concern themselves with currently.

Both left far behind this season by Pep Guardiola at Manchester City, Mourinho has lost a couple of big games recently, with his style once again taking some flak – although as much for its lack of results as its aesthetics – while Conte has overseen recent thrashings at the hands of Watford and Bournemouth.

United have won just one of their last fourteen games against Chelsea and lost the reverse fixture earlier in the season, but only two of those have been by more than one goal and, with both Conte and Mourinho being defence-first managers, it was always going to be worth a bet on Sbobet 365 to be a closely-fought low-scoring match.

Conte set up his side in a 3-4-3 formation with Alvaro Morata and Danny Drinkwater replacing Pedro Rodriguez and Cesc Fabregas in the team that drew in mid-week against Barcelona, while Mourinho chose a 4-2-2-2 formation.

His set-up utilised heavy man orientations in defence; Anthony Martial and Romelu Lukaku would keep close to Cesar Azpilicueta and Antonio Rudiger respectively, Paul Pogba and Alexis Sanchez on N’golo Kante and Drinkwater, Nemanja Matic on Willian while Scott McTominay was effectively man-marking Eden Hazard, following him across the pitch much like Ander Herrera did in the same fixture last season. Chris Smalling was also generally the man to push out whenever Morata dropped off, with Victor Lindelof covering.

There was two obvious ways for Chelsea to get around this. Firstly, Andreas Christensen was left free in the centre and could have easily pushed forward on the ball, forcing one of the markers to leave their man to stop him which would then leave that man free. This was used a handful of times but for the most part Christensen remained in the backline, perhaps wary that should he lose the ball high up the pitch he would be leaving the other centre-backs two-on-two against Lukaku and Martial.

Secondly, Sanchez wasn’t doing a very good job of covering Drinkwater, leaving him with some space to work with if the ball was slipped through to him, but again this was rarely taken advantage of. Instead, exploiting the United midfield’s close marking, Chelsea would drag men away from the centre to open up space for one of the defenders to play a pass straight into the feet of Morata to lay-off for Hazard or Willian. The aggressive defending of the United centre-backs and Morata just simply not looking match-sharp meant this wasn’t always effective but it was an easy way of getting the ball from back to front.

Hazard also didn’t have much issue getting on the ball – he often moved far away from his nominal position in the left inside channel before checking his run and sprinting back into it, with McTominay essentially forced into being reactive rather than proactive in his defending due to his man-marking job. The youth teamer did an excellent job tracking the Belgian though, and while Hazard was able to pick up the ball easily, he rarely had much space to work with it.

Chelsea’s primary method of attack was working the ball down the left, with Willian often coming over to that side of the pitch to make it easier, before quickly switching play to Victor Moses on the right. The Nigerian rarely threatened United with his dribbling or crossing though, so this wasn’t particularly effective. Chelsea took the lead from a counter, where Willian shone again, but it was a catalogue of errors from United that enabled him – untracked and played onside by Antonio Valencia – to finish.

United’s attacking wasn’t much better. They also directed their play down the left, but this for the most part meant the ball going out to Ashley Young to be crossed into the well-guarded box. Pogba would drop in alongside Matic and McTominay deep in midfield to get on the ball and Sanchez did the same early on in the game, although eventually he pushed up higher, adding an extra body in the box for crosses. This meant there wasn’t really anybody between the lines to threaten Chelsea though, with only Martial dropping off the front and quickly moving the ball to pose any questions other than Young churning out crosses. They got their equaliser with some neat interplay from Sanchez, Martial and Lukaku in the centre, but this wasn’t frequent and the goal perhaps goes to show that this was exactly the type of play they were missing.

After a pretty conservative first half of football from both teams, Mourinho felt confident enough to go for the win in the second. United pressed form the get-go after the break and had Chelsea on the back foot. Neither Kante or Drinkwater are particularly strong on the ball, which made it hard for Chelsea’s defenders to play out from the back and, with the risk of losing the ball near the edge of the box looming large, the ball usually ended up being passed back to Thibaut Courtois to hit long.

With Morata struggling to hold up the ball, United would mostly win it back in these situations, although if Chelsea did manage to squeeze the ball out to Hazard, he had a lot more space to work with and looked dangerous driving at a higher United defence. He and Morata also switched positions to help free him up from McTominay’s marking, but eventually Conte just removed him for Pedro.

United were more considered in attack in the second half. Sanchez stayed between the lines more while Martial roamed until he was removed for Jesse Lingard, who drifted from side to side behind Kante and Drinkwater and made well-timed runs into the box when the ball went wide – perfectly demonstrated by his game-winning header. Rather than just slowly passing amongst themselves before having Young cross, the home side were now trying cut through Chelsea’s centre, with the midfield better-connected to the attack with Sanchez and Lingard as links.

Having appeared content with a draw for most of the game, Chelsea now had to attack. Conte introduced Olivier Giroud and Fabregas at Moses and Drinkwater’s expense, switching to a 4-4-2, while Mourinho went on the defensive, swapping Sanchez for defender Eric Bailly. Conte’s changes ostensibly worked, as Morata scored – Giroud laying off the ball first time to Fabregas to then return forward into the path of Morata to finish – but it was incorrectly ruled out for offside.

Aside from that, United saw out the game with ease, wasting time and scything down Chelsea players whenever they were building some rhythm.