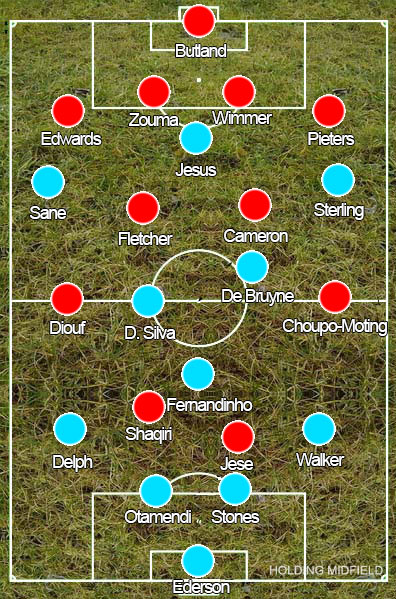 With their city rivals showing little ambition in their draw away to Liverpool, Manchester City had the opportunity to solidify their position at the top of the table as their former manager Mark Hughes returned with his Stoke City side.

Hughes lined up his team in a 4-4-2 while Pep Guardiola went for a 4-3-3. The Welshman’s strategy was unsurprising, sitting back and letting City have the ball in front of them, asking them to break them down. It became clear that this was a bad decision immediately: Xherdan Shaqiri and Jese Rodriguez did little to block passes into the midfield and Darren Fletcher and Geoff Cameron could be dragged around so easily they did little to shield the defence, meanwhile the wingers’ failure to tuck in sufficiently meant it was easy to play passes straight through them – the centre-backs able to get it straight into the feet of Gabriel Jesus easily.

City’s gameplan was based around trying to overload the unprotected backline. One of the centre midfielders would push up against a centre-back, while the wingers would hug the touchline to stretch out the four defenders. City would look to get the ball from back to front quickly, isolating each defender, with the switch of positions making them hard to track. David Silva would sometimes pop up on the left, combining with Leroy Sane, but the more common move was Kevin De Bruyne pushing up next to Raheem Sterling. City would regularly try to find Sterling quickly on the right, the winger dropping a little deeper if De Bruyne was making a movement toward the flank so the Belgian had space to exploit behind Erik Pieters, supplied by a little touch into the space, or taking on the full-back if De Bruyne stayed more central. The two tormented Pieters and Kevin Wimmer, constantly firing low balls across the six yard box.

Stoke’s backline was so badly exposed in part because those in front of them weren’t doing their jobs well. The forwards were meant to block passes into the midfield but Kyle Walker and Fabian Delph stayed quite deep, essentially acting as a bounce pass from the centre-backs into Fernandinho or Silva when he came deeper. Cameron was stuck between leaving Fernandinho free and making it easy for City to play out, or pushing up and leaving De Bruyne free – he usually ended up doing a bit of both, providing no real hindrance to the first stages of City’s build-up and failing to track De Bryune’s runs. The team as a whole needed to be more compact, but instead it was easy for City to play through them.

The opener came from a counter-attack down Stoke’s left side. Shaqiri chased down a long ball but was left so isolated he had to send the ball back towards the half-way line, Tom Edwards misplaced his pass to Fletcher and the Scot played his straight into the feet of Sterling. He laid off the ball to De Bruyne, who rolled it behind Wimmer into the path of the onrushing Walker to cross for Jesus’ finish. Stoke’s backline had been struggling to cope enough as it was, but Pieters being caught up the field left them outnumbered and Walker joining the attack only worsened their problem.

City’s next minutes later went down the opposite flank. Sane failed to get around the outside but he played a one-two with De Bruyne, completely free on the edge of the box with Stoke dropping so deep, to get behind and set up Sterling. A third was added a little later – De Bruyne dragging Fletcher away to open up a pass into Jesus, getting Sane running in behind and hitting a low cross into Sterling to set up Silva, making an untracked run form midfield.

City had all but confirmed their win without any fight from Stoke. The closest thing they had to an attack were long balls up to Shaqiri and Jese, and the lack of threat coming from the midfield meant that Fernandinho could drop back into the defence to outnumber the forwards without any consequences.

Shaqiri dropped off the front slightly, giving more protection to the midfield, but at three goals down this was a bit late. They soon narrowed this margin though: Mame Biram Diouf exposed that Delph isn’t really a full-back, but Silva and De Bruyne’s laissez-faire attempts to get back had left the midfield open and made it easy for the Senegalese to isolate Delph. City had clearly eased off, and Stoke got another shortly after half-time – debutant Edwards sending in a cross and Walker failing to notice Diouf running between him and John Stones until it was too late.

City killed off the comeback soon after though. De Bruyne closed down substitute Bruno Martins Indi – his block cannoning off into his path down the right, racing after it then hitting a first time cross straight into Jesus’ feet to finish first time. It was individual brilliance from both players to create a goal from nothing, but showed how the conceded goals had woken City up – De Bruyne probably would have trotted slowly back into midfield rather than chasing the centre-back down had they still been three up.

Fernandinho then demonstrated the poor job the midfielders were doing defensively, firing a shot in unopposed from the edge of the area.

Their sixth came due to the heavy man-oriented defending of Stoke. The midfielders each tried to follow their own man and Jesus dropped into the space that inevitably opened up from their movement. Kurt Zouma followed him into the midfielder, leaving a massive gap for De Bruyne to slide a through ball for Sane into.

Substitute Bernardo Silva got the final goal. Stoke’s players just backing off as Yaya Toure and Sterling came towards them until the Portuguese just ran straight through the middle to finish.

The only time Stoke got close to going toe-to-toe was when City essentially gave up, and they continued to be a shambles as soon as City took them seriously again. Hughes had switched players around at half-time but he just rearranged the deckchairs on the Titanic, failing to change the fundamental problems at the core of their failure. It was an impressive performance from City, however Stoke made it easy for them. They asked City to play through them, then failed to stay compact enough to make this possible. They turned the game into a collection of one-versus-one battles but don’t possess the quality to make this a worthwhile strategy against the technical ability of City’s players.