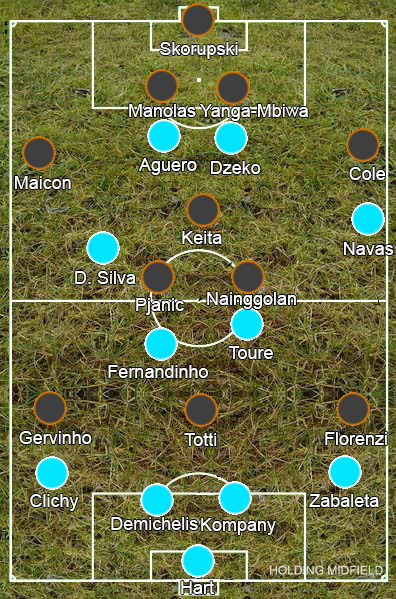 The plans for UEFA’s Financial Fair Play regulations sped up Manchester City’s plans to join the Champions League, forcing them into splashing huge amounts of cash to break in quickly, but their accelerated ascension to the European elite hasn’t helped them now they are in the inner circle. A lack of pedigree has left them with consistently difficult groups, putting them in an endless cycle of failing to improve their stature because they face such hard opponents. This season is no different, with City facing familiar foes in Bayern Munich and CSKA Moscow but also a very promising Roma side buoyed by the coaching of Rudi Garcia.

Nevertheless, the expectation ahead of their clash should have been resting more heavily on City. On home soil, the Premier League champions were able to put what was essentially their strongest line-up out in their favoured 4-4-2, while Roma were without several first-teamers, most notably Daniel de Rossi and Morgan de Sanctis in goal, giving Lukasz Skorupski a rare appearance in their 4-3-3.

Their position only looked stronger when they took the lead after three minutes from a penalty. There’s a tenuous link that could be made that the penalty came from their decision to field two strikers. Edin Dzeko and Sergio Aguero were pulling the centre-backs in different directions to stretch the back four in those opening stages, and Aguero in particular benefits highly from the lack of cover a centre-back partnership gets when he has a striker partner and can push up on the shoulder of that last man. Maicon’s holding could be a sign that the lack of cover was a worry to them as they needed to keep the striker close to them, especially when the grappling continued long after the penalty, but was more likely just pointless aggression.

Despite conceding that early goal, it was clear Roma were on top from the start. Maicon cracked a ball onto the post immediately after the goal then scampered in behind again minutes later only to be flagged offside, with Roma finding it very easy to move the ball forward. City were trying to push up high against Roma’s defence but they were so outnumbered in the middle that it wasn’t difficult for them to move the ball out – Seydou Keita would drop in between the centre-backs to collect the ball and either had Yaya Toure following him, allowing him to pass to the free one of out of Radja Nainggolan and Miralem Pjanic ahead of him, or had no one following him, allowing him to the time and space to pick out whatever pass he wanted.

To add to this midfield dominance, Francesco Totti was constantly dropping off the frontline into the space between the lines, forcing the centre-backs to either leave him free or push up themselves, with Alessandro Florenzi and Gervinho looking to move into the vacated area. Pablo Zabaleta and Gael Clichy following them inside to cover didn’t necessarily help matters as Maicon and Ashley Cole were pushing so high up the pitch they would frequently be left in acres of space.

The goal was the perfect example of this: 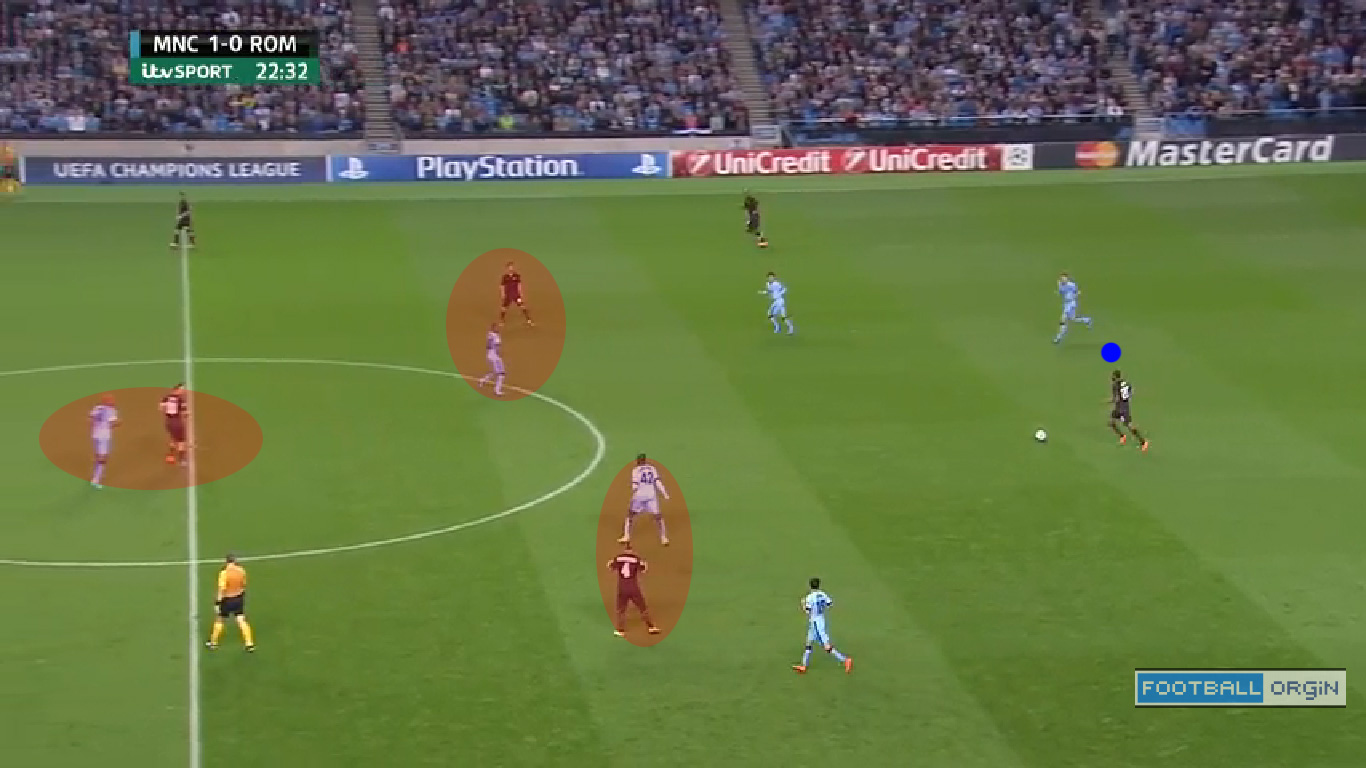 Keita (blue) receives the ball from a goal kick, but has no good passing options so simply strides forward. 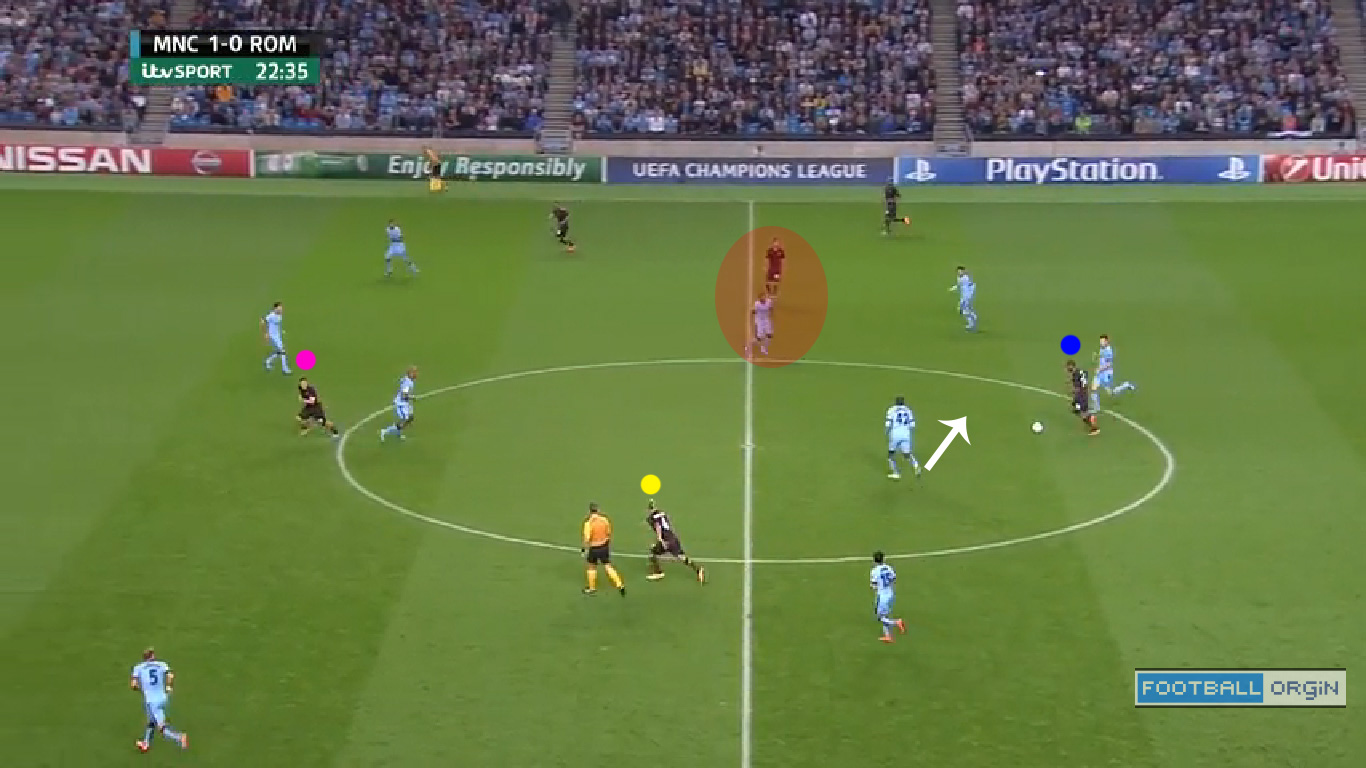 Him running with the ball forces City into challenging him or letting him run straight past them. Toure comes across leaving Nainggolan (yellow) free. Meanwhile Kompany has let Totti (pink) go free. 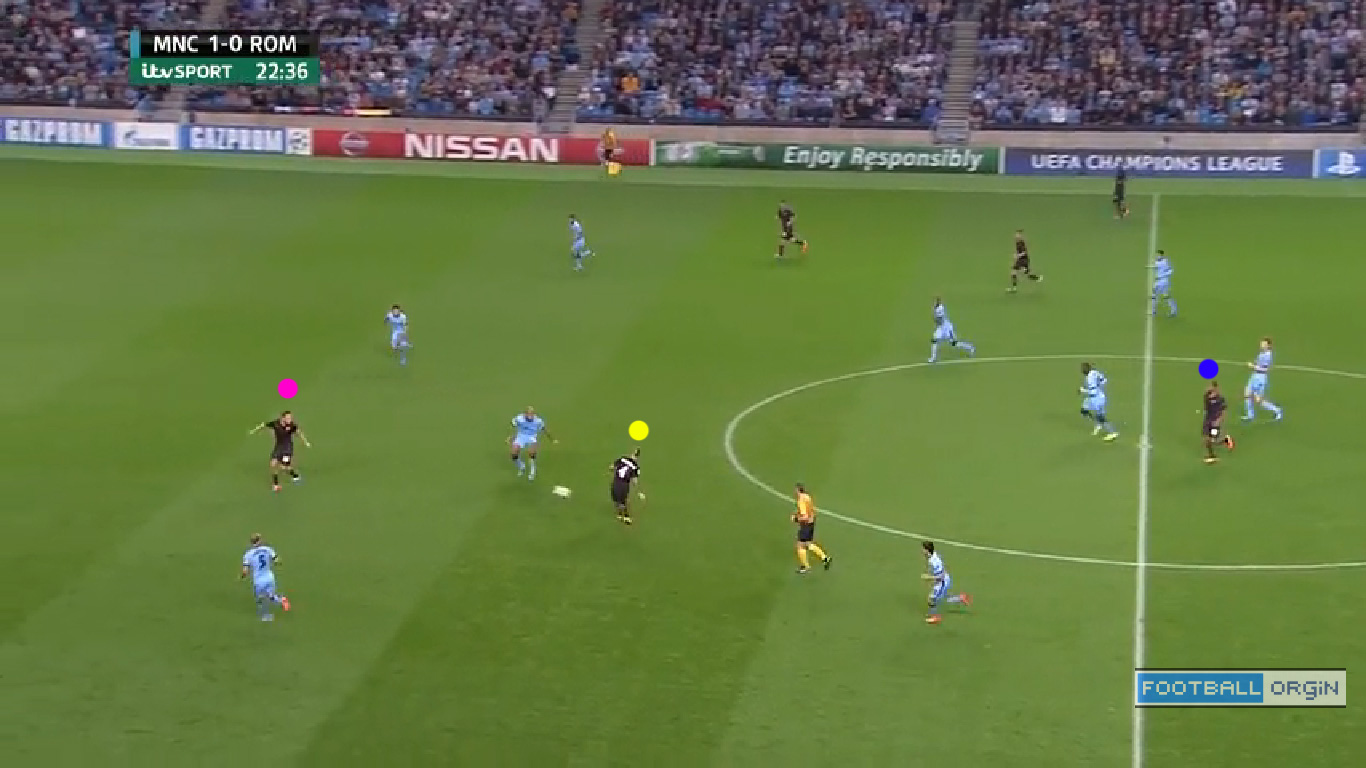 Keita passes it to the free Nainggolan, who hits a first-time pass into Totti’s path, leaving him one-on-one with Joe Hart to finish.

This structure also made it very difficult for City to move the ball forward: 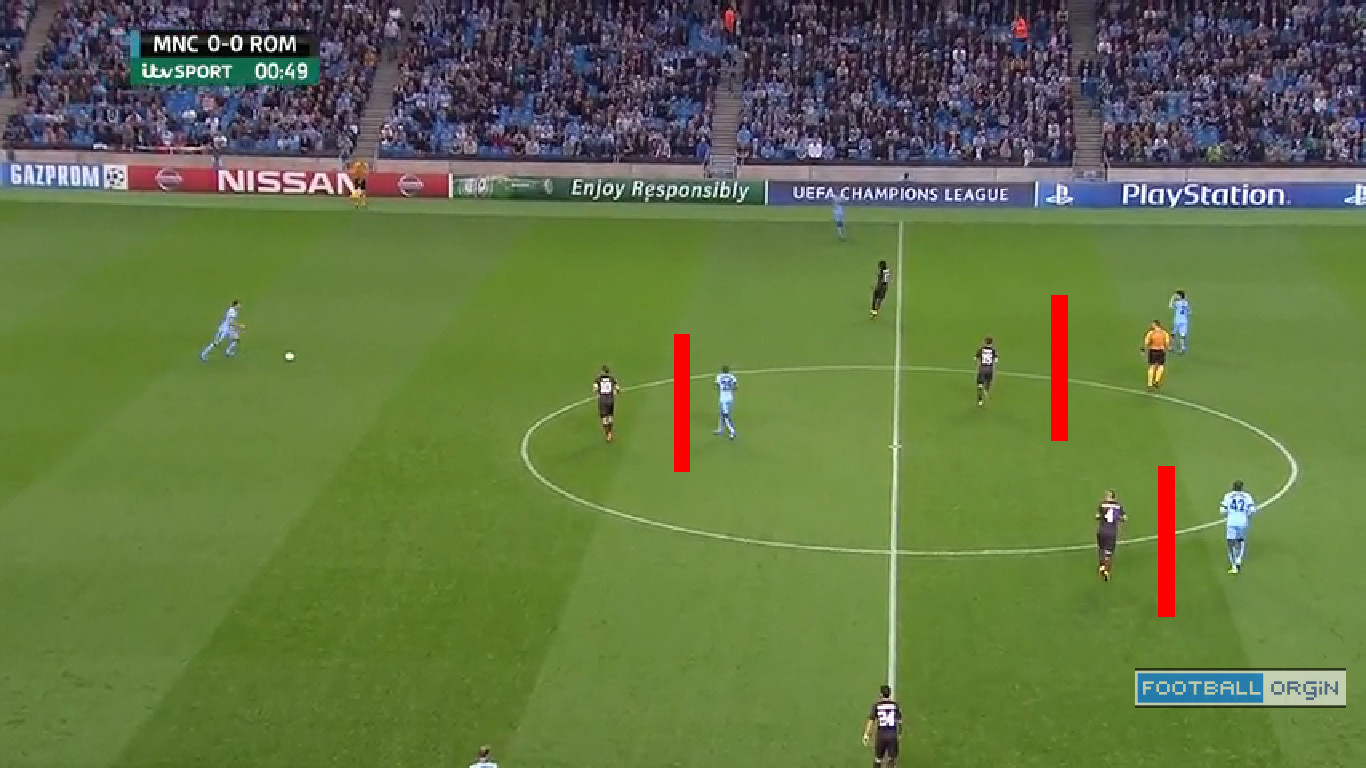 Demichelis has no easy ball into the midfield. 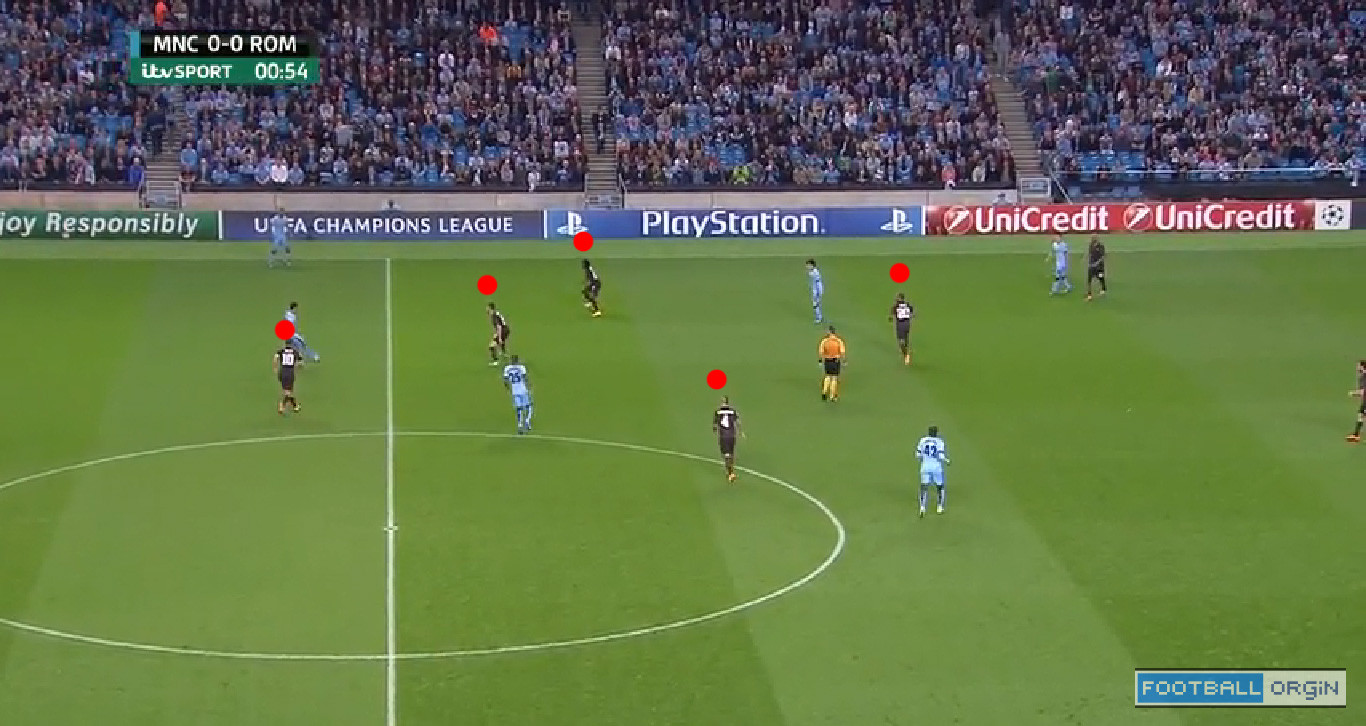 He strides forward with the ball but still doesn’t have an easy option. The only free man is Toure, but it’s very difficult for him to play the ball to him from here. 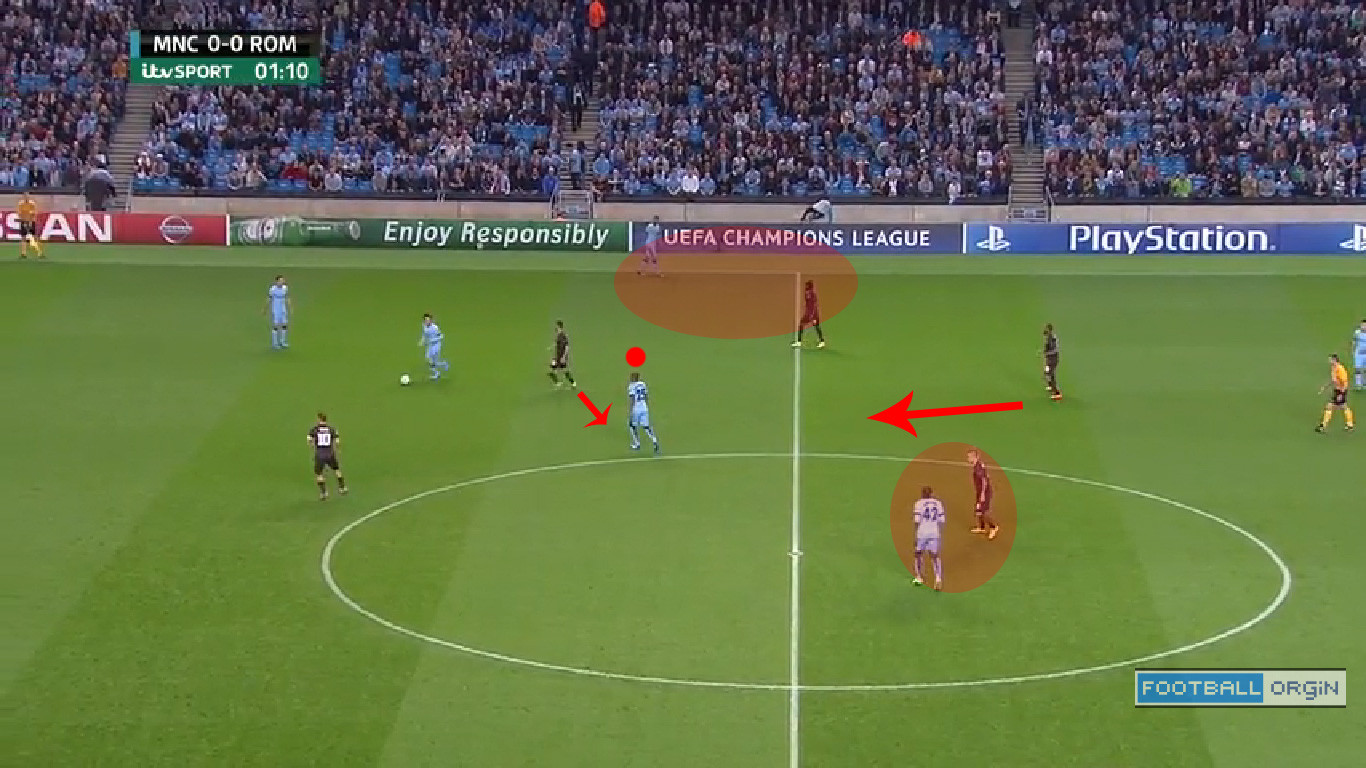 The ball goes out to Clichy then pushed out for a City throw, eventually David Silva is forced into coming back to collect it. He still has no easy options though: Toure is marked by Nainggolan, Clichy by Gervinho and either one of Keita or Pjanic can pick up Fernandinho. 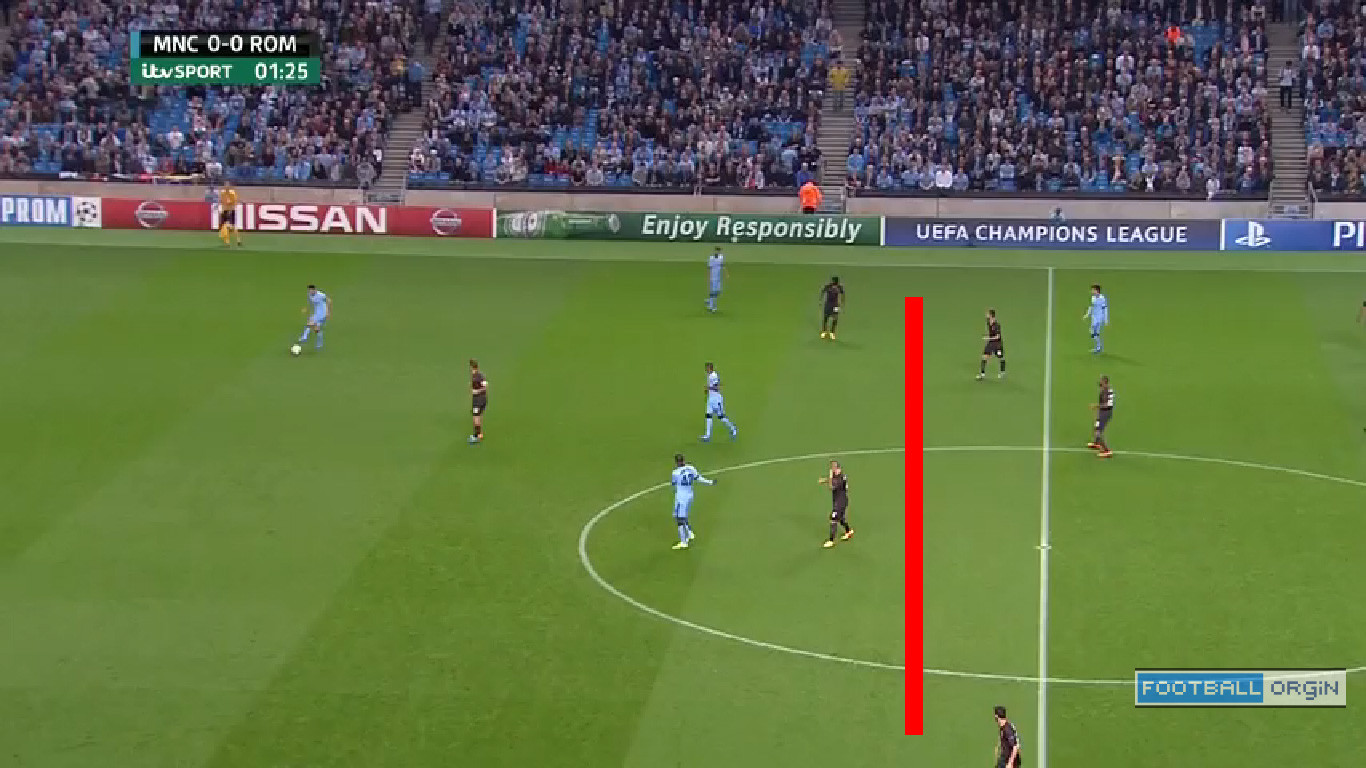 The ball goes back again to Demichelis and Silva wanders back up field, yet Roma still haven’t been moved around and the ball can’t be played through. Both Toure and Fernandinho have positioned themselves deeper looking to receive that first ball out of the defence. 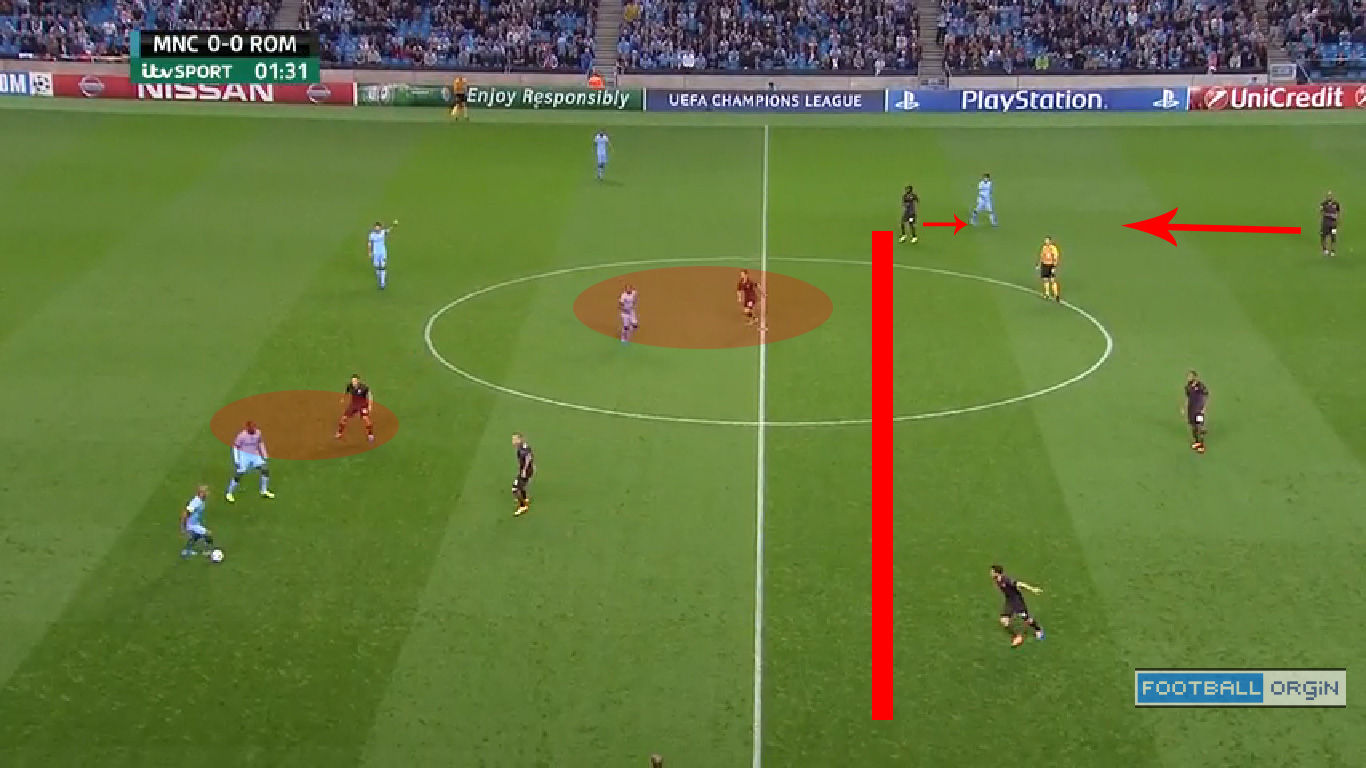 They attempt to play it out from the other side, but there’s still no easy ball out. Florenzi has Zabaleta (just off screen, bald scalp aside) marked, Pjanic is on Fernandinho, while a crossfield ball to Silva could be picked up by Gervinho or Maicon. What’s more, Toure and Kompany have been pushed within metres of one another and the pair are now quite boxed in. Whereas previously they were in plenty of space to pass among the defenders, Totti and Nainggolan have worked their way close to them and any mistake can be pounced upon. Kompany plays a simple ball out to Zabaleta on the right, who hits a long ball over the top which is easily dealt with.

Edin Dzeko dropping deeper allowed them to work the ball forward more easily, although it was obvious Roma were very much dominating. James Milner replacing Jesus Navas, largely anonymous stranded out on the right wing, went some way to addressing the balance, him and Silva swapping sides to narrow the midfield and encourage the full-backs to venture forward. They remained stuck between a rock and a hard place defensively though: pushing up meant they were picked apart as outlined above, but sitting deeper and trying to squash that space between the lines gave Pjanic the time he needed to pick out inch-perfect through balls between them.

Ten minutes later, Manuel Pellegrini withdrew Dzeko to add an extra man to his midfield, bringing on Frank Lampard. Roma were fading anyway, sitting back and mainly looking to attack City on the counter, so Lampard’s introduction simply gave City a surer footing in the middle, and the game petered out in a dull final half hour.

They perhaps did well to escape with a draw given they were on the back foot for most of the game, but, considering the circumstances, City should be disappointed. With Bayern likely to top the group they need to take as many points as possible off Roma if they are to proceed to the knock-out rounds, and a draw at home isn’t a great start. Going out wouldn’t be the end of the world: Simon Britton from SportsbookV.com says â€œMan City are up against in this yearâ€™s Champions League and if they do flunk out early, there is a good opportunity to back them to win the Premiership, provided Chelsea remain in Europeâ€ but they need to kick on if they are to establish themselves as a real footballing power.

At the moment, there’s something very soulless about the way City go about their football. They can dominate and steamroller teams but they never really seem to kick up into second gear when they have to. They have better quality players than Atletico Madrid or Liverpool, yet rarely show the character that either of those teams did last season when they face anything resembling a real test. City are unlucky to get such consistently difficult draws, but it doesn’t reflect well on them that they rarely put up much of a fight.