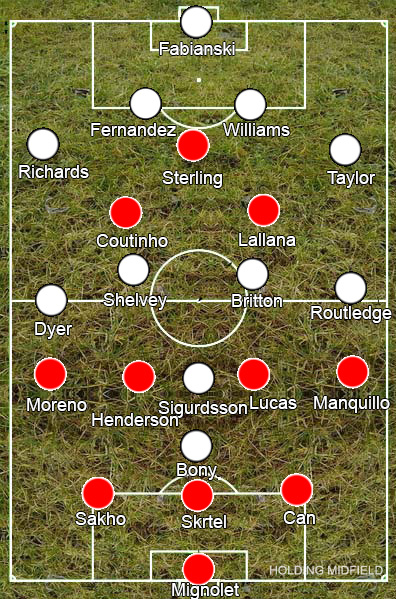 After topping the league at Christmas last year, the suggestion that Liverpool would need a healthy win against Swansea to climb above them as they head into 2015 would have sounded ridiculous, highlighting just what a disastrous start to the season Liverpool have had. Still, Liverpool have shown a recent rise in form following a switch to a 3-4-2-1 formation, even if they had little to show for it: thrashed by biggest rivals Manchester United, nicking a late draw at home to Arsenal and scraping a 1-0 win over lowly Burnley.

Brendan Rodgers’ former club were next, with his former captain Garry Monk setting up his side in a 4-4-1-1. The Welsh side have moved on from the Barcelona template that got them to the Premier League, evolving into a more counter-attacking side first under Michael Laudrup but more noticeably under Monk.

Although a slow opening, Liverpool started the game well and managed to get their first half goal just as the match seemed to be dying off. The current shape in build-up play isn’t really a great deal different from what featured last year – Steven Gerrard would drop down into the defence to form a back three, while the full-backs would push higher on the flanks – it’s only really the depth of the central midfielders and attackers that’s changed.

The main emphasis was on giving Gerrard the space he needed to pick out raking passes out wide or splitting the midfield to push the ball through centrally. It caught the opposition between a rock and a hard place: stay narrow centrally and the widemen could easily pick up the ball in space, but stretch out the lines and the ball could easily be moved through the middle. This season opposition managers, presumably inspired by Oscar Tabarez at the World Cup, have opted to stop the problem at its source by ensuring Gerrard can’t get on the ball. Although his decision-making has drastically improved since his move into a deeper role, his positioning hasn’t so he’s essentially been rendered obsolete by his inability to escape opposition markers.

In the back three at Swansea, there was more equality in who was expected to move the ball out than before. Whereas previously Gerrard had always been the most important of the three, his replacement in the centre, Martin Skrtel, was the least involved in the build-up play. This was largely due to Swansea doing a good job of denying Liverpool the easy ball into midfield. Wilfried Bony and Gylfi Sigurdsson shadowed Lucas Leiva and Jordan Henderson, forcing Liverpool to move the ball out wide instead.

Henderson’s downturn in form this season is no fault of his own, he’s not suited to a midfield two and does a decent job considering he’s only there to accommodate other players – he’s a shuttler and best at knitting the play together further up the pitch, but isn’t suited to playmaking duties deeper, finding it difficult to find space to pick up the ball. Lucas is much better at finding this space, but isn’t really the player you want to – he’s never had the passing range and no longer has the legs to carry the ball forward. The Brazilian’s main use here was as cover for Emre Can when he strode forward with the ball. There’s a definite argument to be made here that if Can can do this role he would be better off in midfield, but part of the reason he was so effective against Swansea was that as part of the back three he was able to receive the ball under no pressure facing play rather than being shadowed as the midfielders were.

With that pass into midfield blocked off, Liverpool had to go wide in search of space. The ball would be knocked out to the wider centre-backs under little pressure with the Swansea attackers busy with Lucas and Henderson. They had two options: a wider pass to the wing-back or a pass infield to the attacking midfielder between the lines, who would stand ready to receive the ball between the wide and central midfielders, while Raheem Sterling would often make diagonal runs towards the near flank ahead of them. With these happening near exclusively down the left and Jonjo Shelvey doing a very poor job of covering, the result was a series of good but ultimately fruitless passing moves. Liverpool were getting into some decent areas but struggled to create anything resembling a proper chance, with Swansea keeping things tight defensively.

Swansea’s problem was they were completely failing to muster up any attacks in reply as Liverpool’s pressing was excellent. Midway through the half, Monk had his side press from the front to gain some footing in the game, which certainly made them more threatening but cost them the opening goal.

The game generally followed the same pattern into the second half however. Liverpool passed the ball well but failed to carve out any real opportunities, while Swansea were seeing more of the ball due to their more proactive approach to defending not getting all that far with it thanks to Liverpool’s own pressing.

Although it served them well throughout the game, the second goal was the greatest reward for Liverpool’s defending. Sterling forced Ashley Williams to play it back to Lukasz Fabianski, then, with Philippe Coutinho also shadowing Leon Britton, Adam Lallana blocked out the pass to Federico Fernandez and closed down the keeper. Fabianski still tried to play the ball out and it cannoned off Lallana’s chest to double Liverpool’s lead.

Not that it lasted long – within a minute, Swansea had pulled one back. Pressure on Liverpool’s backline forced Skrtel into playing it out quickly to Henderson, who controlled it poorly, setting up a crossing opportunity for Nathan Dyer. His cross was poorly dealt with by Can, giving Wayne Routledge a chance to hit another in from the opposite side, and a scrambling Mamadou Sakho heads it into the path of Sigurdsson to finish.

Compared to some of the goals Liverpool concede, this isn’t that bad, but the lack of organisation has been a constant throughout Rodgers’ tenure. Can’s header (if you can even call it that, does it actually hit his head?) provides an opposing argument to playing him at centre-back, gifting Swansea the opportunity to cross again with a mix-up on the opposite side – Henderson’s picked up Bony, but leaves him to mark Sigurdsson, having originally dropped into the backline to cover Sakho when he was forced wide to deal with the first cross from Dye, while Skrtel is aware of Bony’s threat, pointing at him, but assumes Henderson has him and Sakho doesn’t realise until too late he needs to come back across. A panicking Sakho fails to clear the ball and it falls to Sigurdsson, neither followed by Henderson or stopped by Skrtel, who had panicked upon realising Bony is largely unmarked. A simple shout at any point here would suffice: to let Sakho know he needs to come back across quicker, to let Skrtel know he needs to come across and mark Bony if Sakho can’t, to get Lucas to come more central and cut out Sigurdsson. Some options are better than others but all at least provide something, but instead there’s nothing.

The bigger issue here is that there’s never that something. Skrtel is a good defender but isn’t a vocal organiser, Sakho looks like he could be the same, while Simon Mignolet’s a good albeit quiet keeper (and has ultimately always been unsuited to Liverpool’s style). It gets worse with each passing year – Jamie Carragher, Pepe Reina and Daniel Agger’s form all dropped but each had an ability to organise that those who have replaced them lack. Now all the leaders have gone and the quality is playing under a manager who in three years has never shown either the ability or, worse, the interest in organising a defence that makes you think it could be sorted. Even within a performance as good as this, it was inevitable Liverpool wouldn’t keep a clean sheet.

Nevertheless, Swansea continued to struggle plugging the gaps left when they pressed from the front. With the forwards now going after Liverpool’s centre-backs, Shelvey and Britton had to step up to meet Henderson and Lucas, leaving space between them and the defence behind them. For the third, Coutinho pulled into this space, was played in and tapped it away to Lallana first time, who had space to run into after Williams had to step up to meet Coutinho, but instead dribbled off to the left for an excellent goal, aided by a clever run inside by Sterling.

The game remained an even contest until Britton was removed for Ki Sung-yueng. Although struggling defensively, Britton had dealt with Liverpool’s pressing well, drawing in players and forcing Henderson and Lucas up the pitch to make room for Sigurdsson. The more obvious candidate for being substituted was Shelvey, who had been poor on all accounts and looked knackered 30 minutes in. Maybe the logic was that he was more likely to create something out of nothing, but Britton was the one that actually gave Swansea some control in the match, so it was fitting that Liverpool’s win was sealed with a flick off Shelvey’s head at a corner.