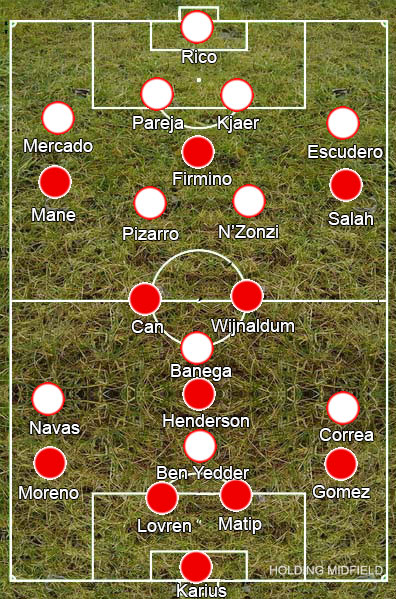 The Champions League proper was back at Anfield with a rematch of the 2016 Europa League final. Despite a loss on the night, Liverpool supporters were full of excitement for the future that has since mellowed – the team improved enough to qualify for this year’s competition but they look to have stood still in some areas, the defending in particular as woeful as it had been under Brendan Rodgers. Meanwhile Sevilla, having lost Unai Emery to Paris Saint-Germain, enjoyed an excellent year under the highly-rated now-Argentina manager Jorge Sampaoli and are currently under the stewardship of his compatriot Eduardo Berizzo, who had an impressive few years at Celta Vigo.

Jurgen Klopp continued with the 4-3-3 Liverpool usually line up in, while Sevilla were set out in a 4-2-3-1, matching the home side in midfield.

It didn’t take long for Liverpool’s backline to do what they do best: Joe Gomez failing to anticipate an obvious pass and Dejan Lovren collapsing over the top of the ball, allowing Wissam Ben Yedder to tap in an easy goal. Going in front so early makes it difficult to work out what their initial gameplan was, but with the lead Sevilla retreated into a fairly conservative strategy: the backline sitting fairly deep and the double pivot protecting them. A disciple of Marcelo Bielsa, Berizzo’s teams adopt a type of man-orientated pressing that didn’t really fit in with this defensive outlook. Some Sevilla players might look to push up high against Liverpool’s players while others would sit back, stretching the team vertically and giving Liverpool’s players acres of space in midfield. It wasn’t uncommon to see Guido Pizarro or Steven N’Zonzi sitting in front of the backline only to then charge up the field to confront Emre Can or Georginio Wijnaldum, who were nominally “their” men. Ahead of them, Ben Yedder couldn’t press both centre-backs, making him easy to pass around, and Ever Banega did a poor job of tracking Jordan Henderson.

Fortunately for them, Liverpool’s midfielders aren’t particularly good at taking up good positions to play through midfield and were slow on the ball and misplacing passes early on. The forwards ahead of them are perfect for this kind of game though, moving intelligently and quickly to drag the defenders around. Roberto Firmino was struggling to influence the game with the double pivot blocking his space to drop off into, but he drifted into the channels. Sadio Mane’s dribbling troubled Gabriel Mercado and he often drifted into the middle, opening up space for Can to run down the outside to his left. The most successful was Mohamed Salah: dragging Sergio Escudero up the field because the Spaniard was expected to stay tight to him then using his pace to attack the space he had engineered behind the full-back. 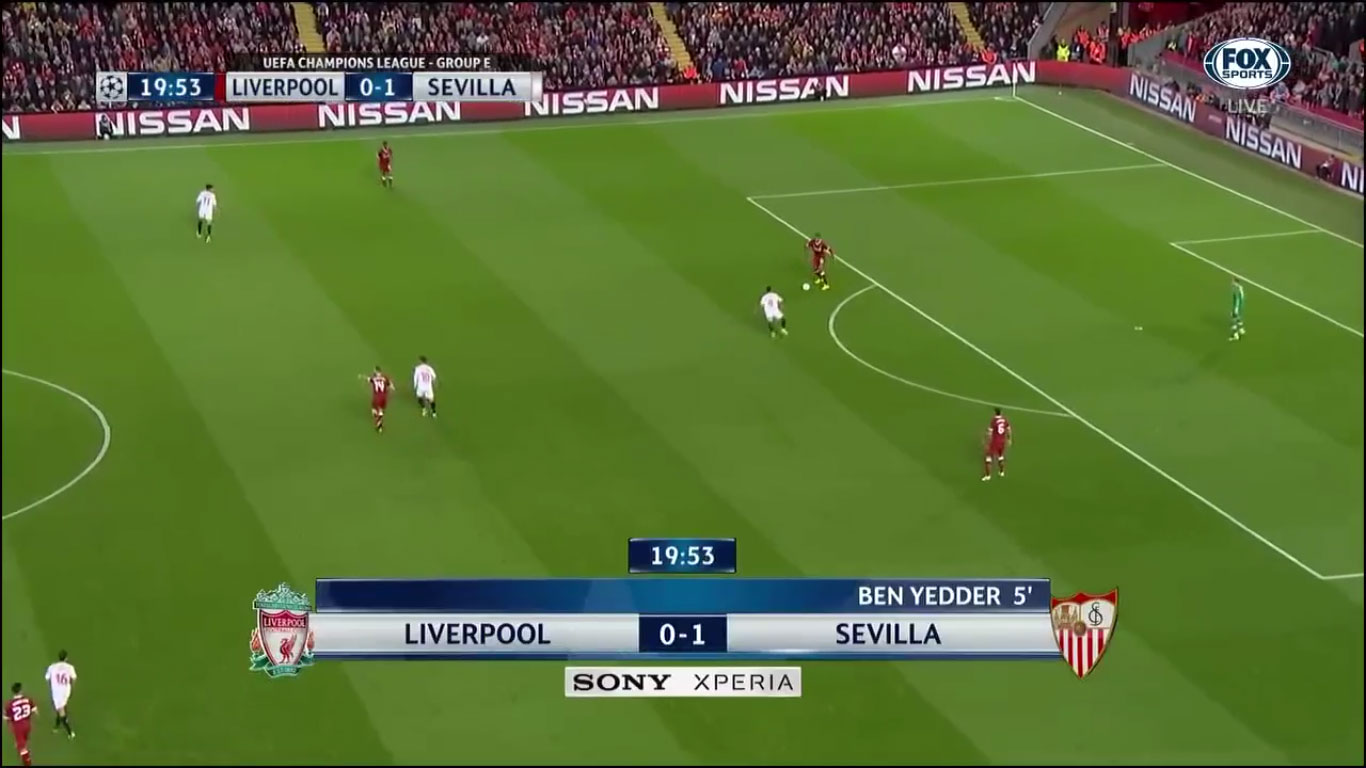 The ball is rolled out to Joel Matip and Ben Yedder closes him down. Most players are closely marked but Lovren is completely free, so Matip plays an easy lateral pass to the Croat. 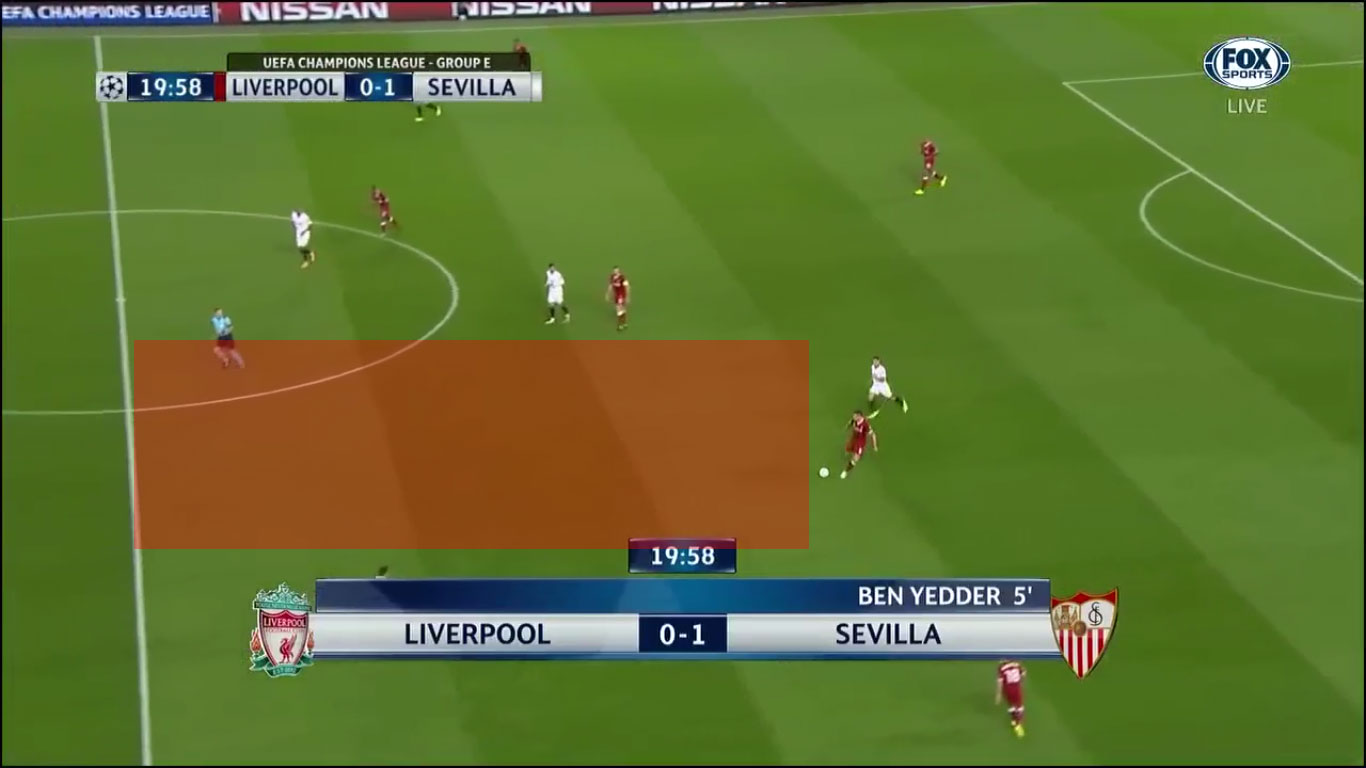 Lovren has space to stride into, but Jesus Navas has retreated and could come across to cover. Lovren plays the ball to the free Alberto Moreno and he recycles it back to Matip. 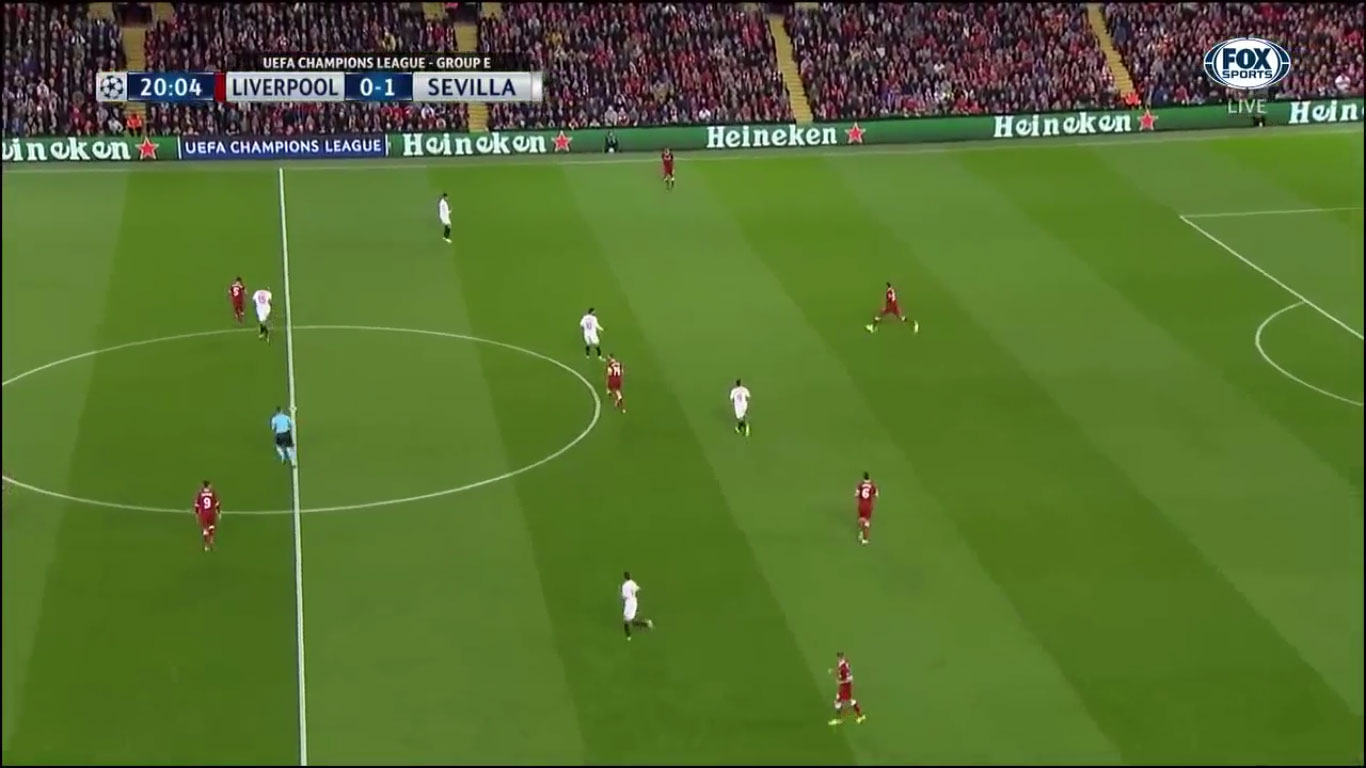 The man-marking means that while it is harder to play into the deeper players as they are closely marked, there are bigger gaps between the defending midfielders to slide a ball through towards the strikers. Matip plays a pass through the space between N’Zonzi and Joaquin Correa into the feet of Salah. 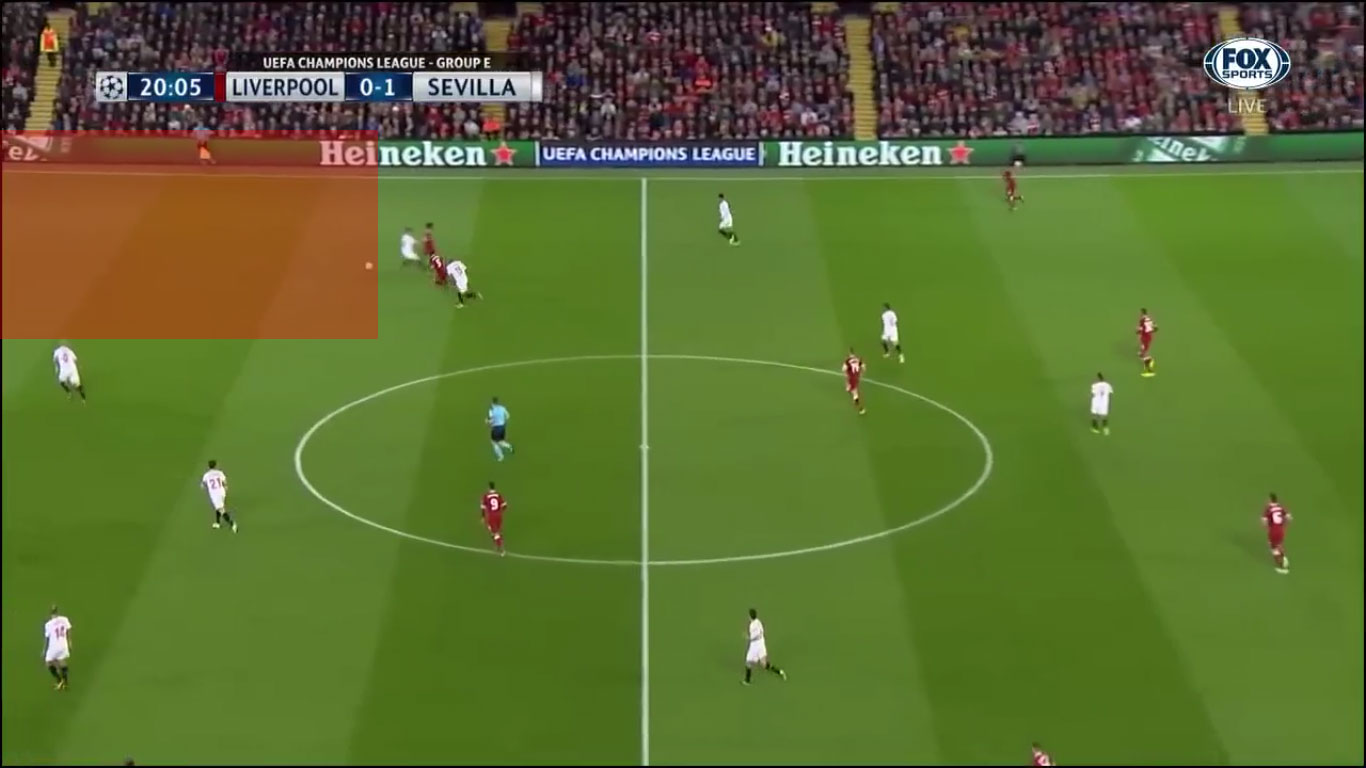 Salah drops off the frontline, bringing Escudero with him and flicks the ball into the space behind for Wijnaldum to attack. This also highlights a problem with man-marking in that it is inherently reactive – the defenders are forced into following the moves of their opponent. Wijnaldum has made a run off the back of N’Zonzi and already left the Frenchman behind. 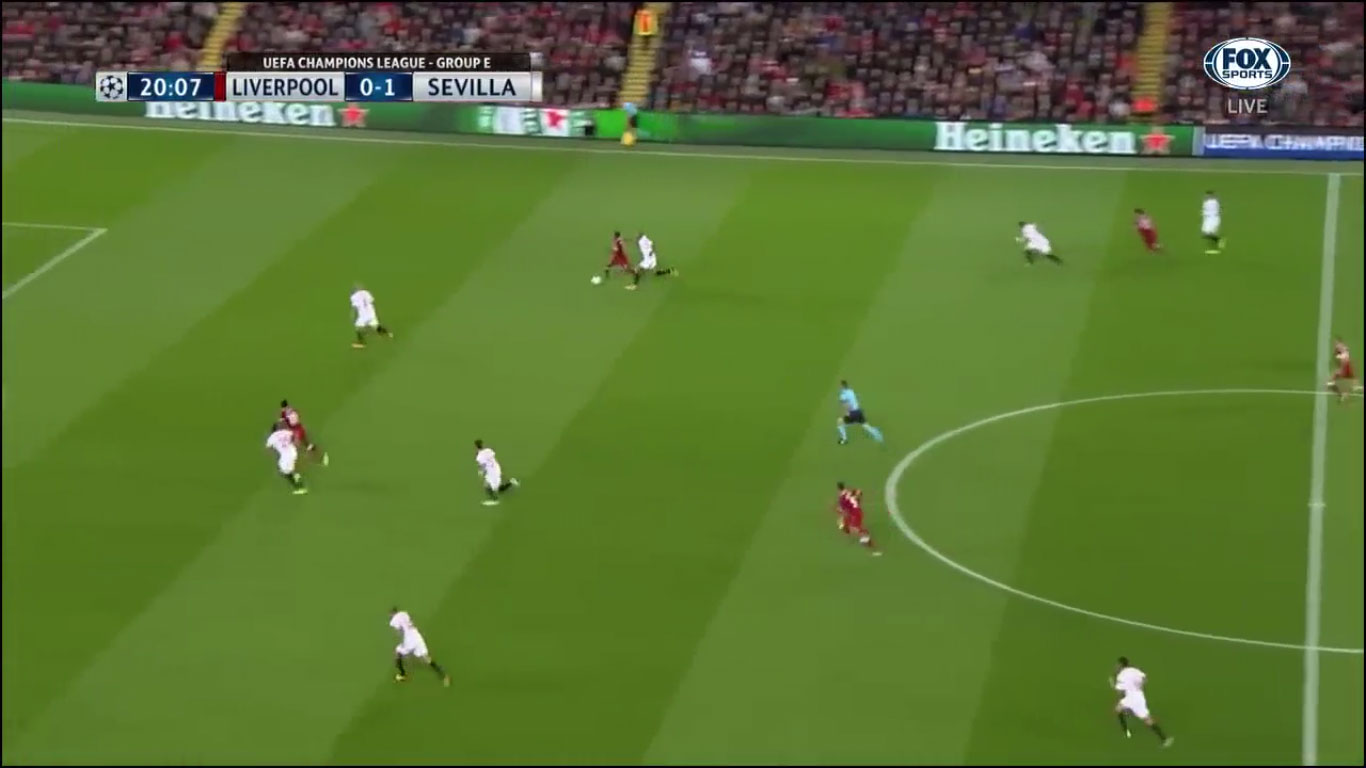 A spare man at the back means Wijnaldum isn’t clean through but the defence is definitely in disarray: centre-back Nicolas Pareja has stepped up into midfield to track Firmino, right-back Mercado has moved into the centre to keep close to Mane while Pizarro is on the right to stay near to Can. 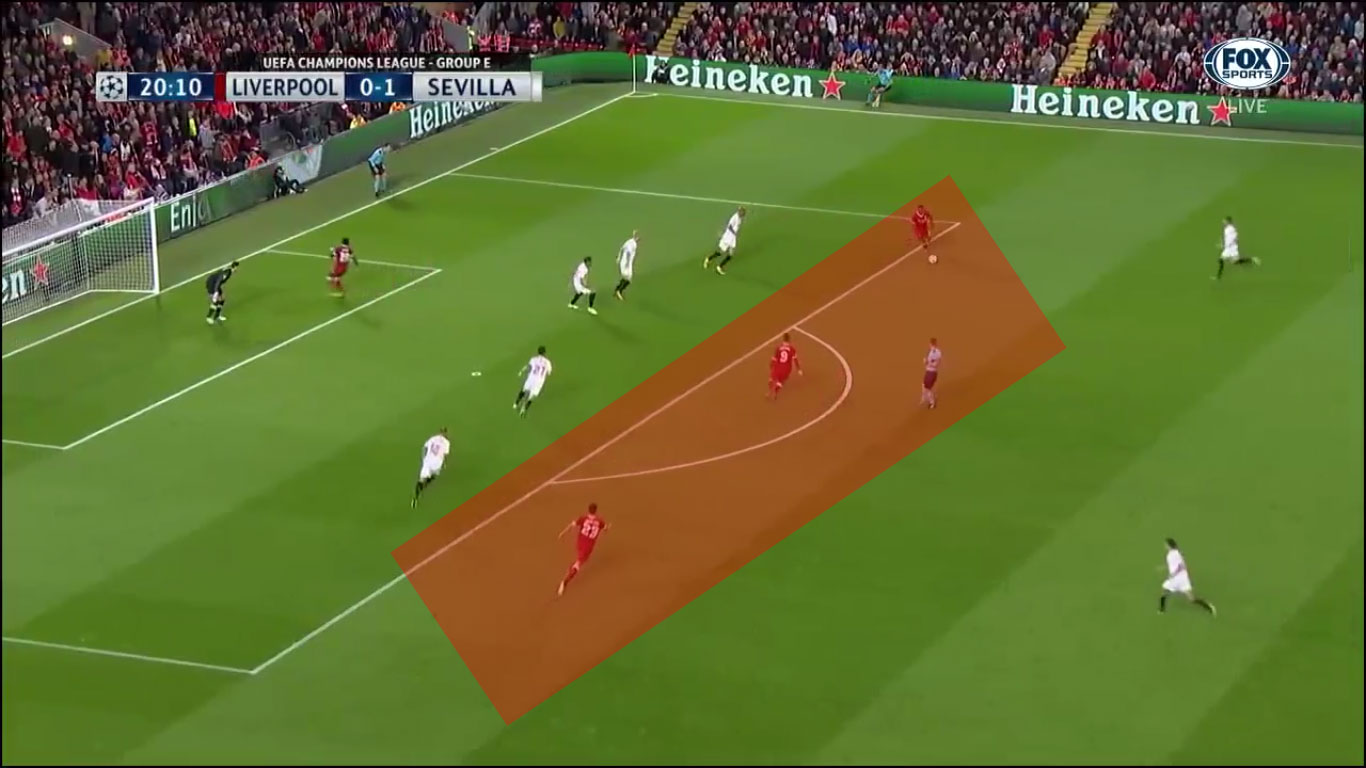 Wijnaldum chops the ball back to play the ball inside to play into the open central areas in front of the defence. Having advanced with play, Firmino has to check his run and, instead of running onto the ball, struggles to get it out of his feet, pounced upon by the defenders. 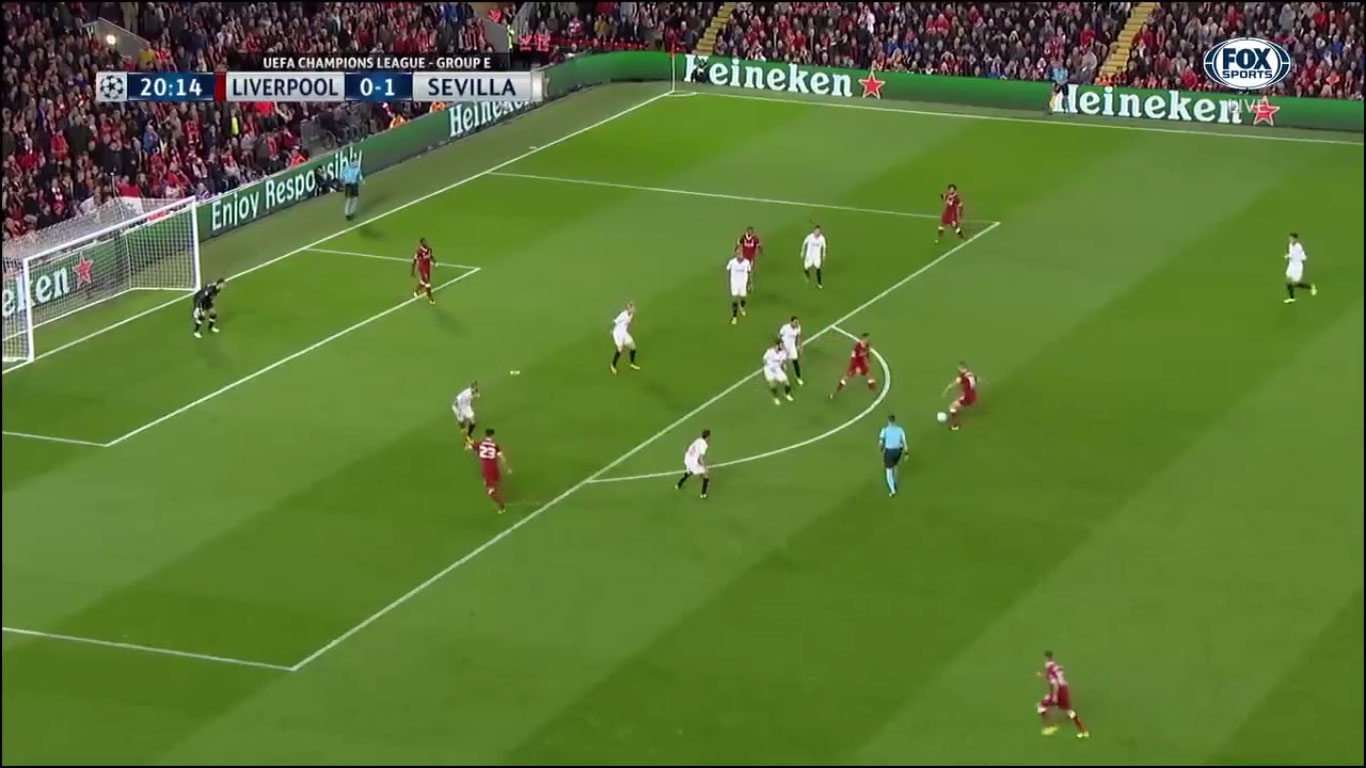 There’s no one available in the Sevilla midfield to pick it up though and Henderson’s supporting run sees him pick up the loose ball and spray it out to the unmarked Moreno. 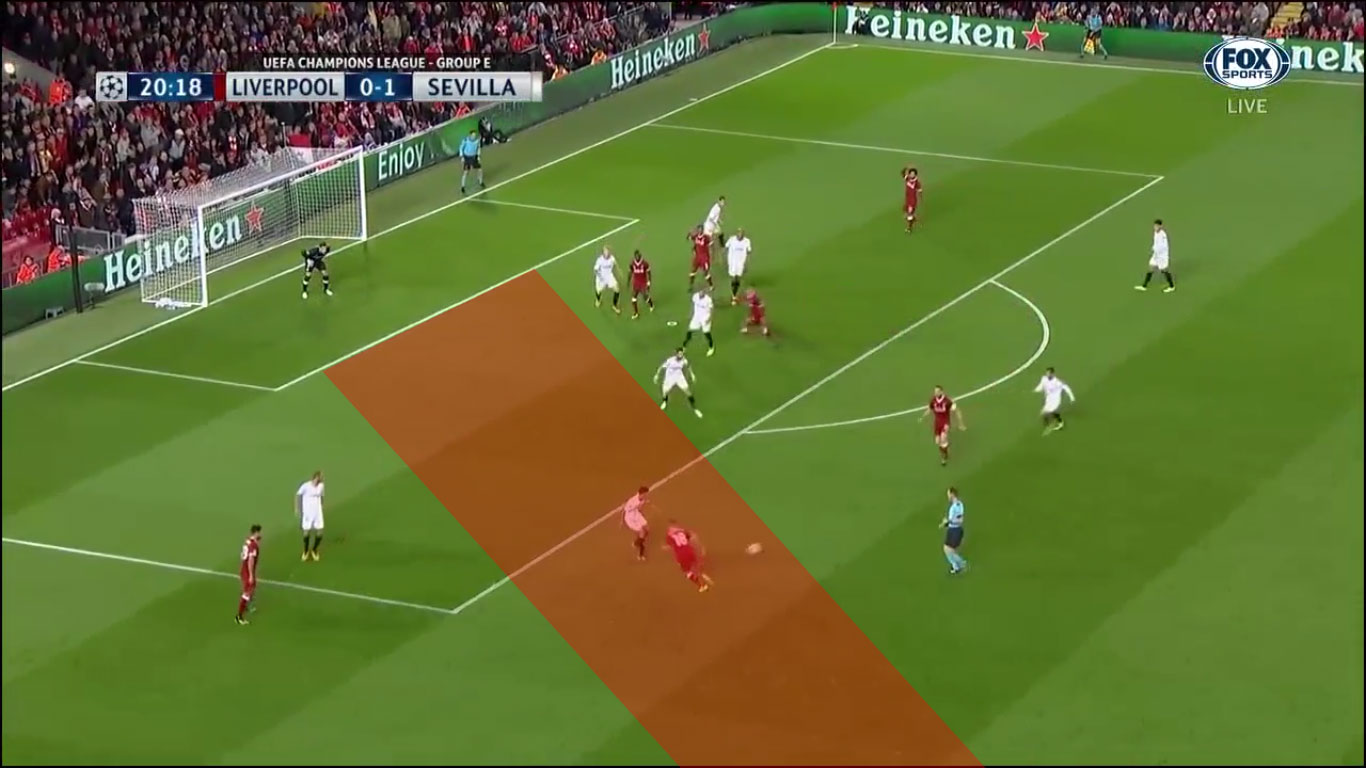 Moreno plays a one-two with Henderson and runs into the acres of space in the box to cross for Firmino’s easy finish. Can opens up this space for him by moving wide and dragging Pizarro with him.

Liverpool looked in the ascendancy, taking the lead when Salah fought the ball away from N’Zonzi, his deflected shot bouncing over Sergio Rico, then Mane winning a penalty that Firmino missed – the ball cannoning off the outside of the post. Sevilla were really struggling to deal with Liverpool’s rapid counter-attacks, multiple players receiving bookings, however they needed to push forward in search of a goal.

Their build-up mainly consisted of short passes around the base of the midfield, trying to pass around Firmino and goad Can up the pitch to aid him. This could potentially have been avoided had Mane retreated a bit, but the Senegalese stayed quite high, often further forward than Firmino, and Can has a tendency to wander anyway. Their attempts to entice Can up to the half-way line were done so that they could play the ball into Navas. With Can high and Lovren offering little support, they could isolate Moreno, although this backfired somewhat as the left-back had a generally good game against his former team.

In the second half, Sevilla generally tried to attack down the opposite flank more, yet still didn’t really create much. Nevertheless, they equalised anyway: Can was drawn up the pitch (he and Wijnaldum switching sides at half-time), Henderson moved across to cover then a throw-in was played into the gap he had left behind and Correa ran through the middle of the defence to place it into the net. Liverpool weren’t even particularly stretched – with a bit of sharpness or even just an effort to put a foot in somewhere, the goal could have been halted easily.

Yet another cheap goal gave away Liverpool’s lead and, while they pushed on in search of a winner, Sevilla looked the more likely to get one – substitute Luis Muriel’s pace troubling their backline repeatedly. By no means a disastrous result but another example of why they are unlikely to be adding a sixth European Cup to their honours this season.