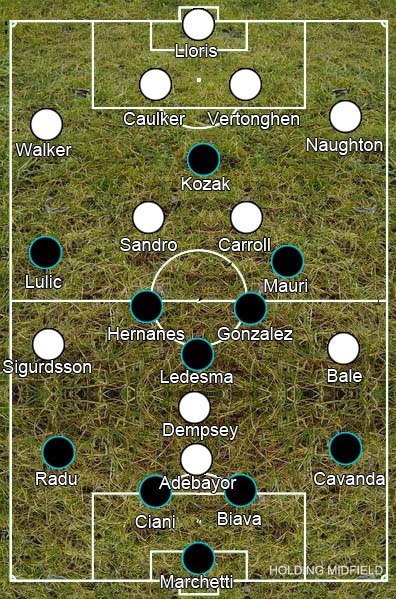 With all the drama before the game, it was pretty typical that the match turned out to be a dull, non-eventful evening. Paul Gascoigne turned up to give fans something to cheer about, but there wasn’t exactly many of them, with attacks prior to the game suggesting the locals had a bigger influence outside of the Stadio Olimpico than inside it. Nevertheless, although chances were few and far between, there were some tactical features of note.

Tottenham were unfortunate not to take the lead early on when Gareth Bale took advantage of Luis Cavanda’s straying from the defensive line only to find his goal ruled out for a non-existent offside. However, that was Tottenham’s only shot in a game Lazio had full control over. Although they set up in a 4-2-3-1 that should have matched Lazio’s 4-1-4-1 in midfield, Clint Dempsey pushed up a lot nearer to Emmanuel Adebayor than the attacking midfielder in that role typically does, playing as more of a second striker, which allowed Lazio to swarm them in the centre. The way Lazio were pressing in midfield there would have been plenty of gaps to exploit had Dempsey played deeper, but instead he ended up being pretty much anonymous.

Lazio’s dominance in midfield was made even greater by left-footed Stefano Mauri coming inside all the time, barely ever sticking to his nominal position on the right wing, adding an extra man to outnumber Spurs. However, this seemed at odds with Lazio’s main method of attacking, which was to float crosses into the area between Hugo Lloris and his defence. One of the more common tactics to engineer these chances was for Senad Lulic to run at Kyle Walker, dragging him deeper, then passing it back for a supporting player behind him to aim for this area in the box. Although as a team they were weaker, Tottenham were more dominant physically than Lazio, allowing them to win individual battles so few of these crosses looked particularly dangerous. Maybe if Lazio had a seperate angle of attack, they would have been able to bombard the Spurs backline with dangerous crosses, but instead they remained predictable.

To stop Lazio dropping the ball into this tricky area, Tottenham played a higher line in the second half, forcing the home side’s frontline further away from their goal to make these crosses pointless. However, Andre Villas-Boas also elected to switch up his overall shape, taking off Gylfi Sigurdsson, who didn’t suit his spot on the right wing at all, for the more natural choice of Aaron Lennon and Clint Dempsey for out-and-out striker Jermain Defoe. Rather than making Tottenham more threatening up front, the change to 4-4-2 just opened up their midfield further: as neither Defoe or Adebayor dropped deeper when Spurs didn’t have the ball, Lazio’s midfielders had plenty of time and space to pick out passes in behind Tottenham’s high line. Instead of eliminating those dangerous balls into the space between their defenders and goalkeeper, Tottenham gave Lazio a bigger space to aim for. Fortunately for Spurs, their offside line was well-drilled and their defenders were quick enough to deal with most of the problems.

The pressure wasn’t really on either of the sides to get a result – Lazio needing only a draw to qualify and Tottenham safe in second place – but they are still yet to really impress in the competition. Even if you check out best sports betting sites, you probably won’t find odds worth persevering with: Tottenham appear to lack the quality in certain areas to really make a mark in Europe and Lazio, although capable of grinding their way deep into the competition, rely far too much on Hernanes for creativity.