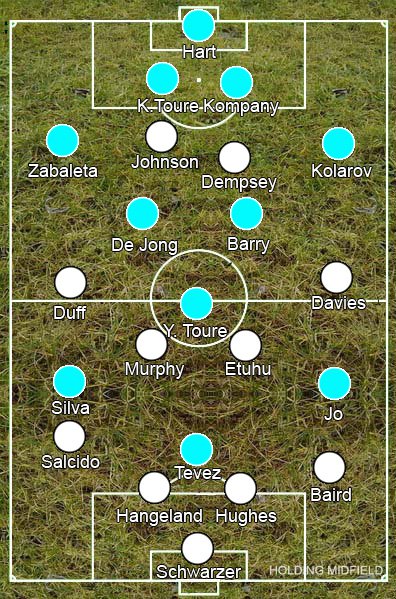 A potentially perfect or awful game for Roberto Mancini depending on the result. With just one win in six and the same amount of points at the same stage last season, the questions over whether or not he’s bettered his predecessor Mark Hughes have been brought up with alarming regularity over the last few weeks. Now he has the opportunity to prove them right or wrong. Lose and things start to look a tad pear-shaped; win and he shows the master tactician he can be.

Meanwhile, while Mancini’s been instilling the defensive discipline that was missing at City under Hughes, the Welshman’s been doing the reverse to what was a rather dull Fulham side, creating a more attacking style, albeit with his own unique drawing abilities.

Man City lined up in their usual 4-2-1-3 with the only change of any real note being the inclusion of Jo as left winger. The use of a striker on the wing was presumably meant as a further aping of Roma’s false nine tactic, where Mirko Vucinic was stationed on the wing, with Carlos Tevez playing his usual role. However, the idea didn’t really work because Jo isn’t close to the quality of Vucinic; his teammates frequently ignored him for passes, but whether this is because they don’t trust him or he’s seemingly oblivious to the offside law is unclear. He did have his uses though: he tracked back well and he gave Man City an option for long balls, although rarely necessary, winning several duels in the air. Fulham set up in a 4-4-2 with Clint Dempsey playing just off Andy Johnson.

Whatever gameplans the managers had planned were switched just a couple of minutes into the game, everything was looking rosy for Mancini. Carlos Tevez took advantage of a poor defensive line from Fulham, shrugging off the poorly positioned Carlos Salcido to slot home. It wasn’t particularly bad, some of Fulham’s players were just slow to push out, but it was sloppy and immediately gave City the upper hand.

Fulham pressed Man City ferociously from the start, occasionally hunting in packs. It simply didn’t work – City are excellent on the ball and, with Dempsey not dropping back and Tevez and David Silva regularly coming into the middle, they were easily passing around Fulham in a 5 v 2 midfield battle, especially with Aleksandr Kolarov and Pablo Zabaleta providing good options out wide. There were a couple of misplaced passes, but for the most part the ball-playing ability of all of Man City’s players shone through, as their intricate passing drew Fulham out, creating gaps for their teammates to attack in a manner that wasn’t shown during their recent poor run. Fulham’s ineffectual pressing can be shown by the fact Man City completed 85% of their 460 passes.

The early goal allowed Man City to maintain a deep defence with little pressing and Fulham struggled to get very far when mimicking City’s short passing. Their best attacks came from long balls to the flanks but they still struggled to create anything, getting just one shot on target, that coming from a corner.

A problem for Fulham appears to be conceding from shots just outside the area, Pablo Zabaleta’s goal and Carlos Tevez’s second came from shots from these kind of areas, as did Paul Scholes earlier in the season. Gera’s goal came from this sort of scenario too, but Man City were much quicker to close him down.

In the second half, Hughes switched to a 4-2-3-1 with Zoltan Gera replacing Damien Duff and Clint Dempsey moving to the left. Dempsey stayed central though and Salcido was given the task of provding the width on the left hand side. This allowed Fulham to gain a bit more of a footing in the middle, but City still controlled the game.

There was a short period at the start of the second half where City’s midfield, but they encountered similar problems to their game against Lech Poznan, where their midfield was too easy to pass around with the defence not also pushing up, and swiftly stopped. In full control, Man City were happy to toy with Fulham for the remainder of the game, remaining impressive but making the second half of little note.

Aside from this there is very little to say about the game – City were simply by far the better team, and it was a good match for Mancini to put down his doubters. The boos coming from the Fulham fans suggest Hughes might be the man under pressure after all.