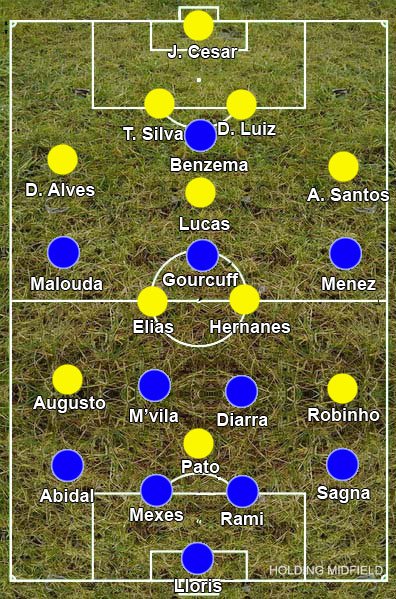 ESPN viewers had the opportunity to vote for one of two high profile friendlies from the last international break: Germany-Italy or France-Brazil, and thankfully chose the latter. Neither turned out to be a classic, but the tie at the Stade de France was really the more potentially thrilling match-up: two teams rebuilding after a disappointing World Cup based on a quick short passing game.

The teams set out in formations that matched one another perfectly, ensuring neither had any shape-based advantages – France in a 4-2-3-1 and Brazil in a 4-3-3.

Brazil had the better of the opening few minutes, then the momentum flipped in France’s direction before the game settled into a scrappier more even game, with Brazil pressing high and France mixing their defensive style.

The key to those early switches of control were the French full-backs. When out of possession, Robinho and Renato Augusto were moving infield to create a 4-3-2-1; this congested the midfield, making that midfield battle more difficult for France but also gave Eric Abidal and Bacary Sagna more time and space to work in. In the opening few minutes, the balls played to the full-backs were horribly wayward, but after this period France were able to take advantage, and Karim Benzema should have scored when Yoann Gourcuff flicked a lofted ball over the defence for him first time, having been played in by an incisive pass from Sagna.

Later Brazil changed to more of a 4-4-2 out of possession – Robinho pushed up to hover around Adil Rami who has having a torrid time, so Augusto dropped deeper and Hernanes pushed slightly wider, lessening the French full-back problem.

The key for Brazil’s build-up play was the movement of Hernanes and Elias. When they were static it was difficult to pick them out for a pass, and the ball would just be played between Lucas and the back four for long periods, but when they were dropping back it was much easier to create a link between defence and attack. France were trying something similar, with Gourcuff dropping deeper and Florent Malouda taking his space in that attacking midfield area much like his movement at Chelsea but as France were having problems getting the ball into these playersit was fairly unsuccessful – although it must be said both Malouda and Gourcuff were impressive.

Eventually France were happier to sit deeper and press less, but they made sure they had that block of three between Brazil’s back four plus Lucas and the rest of the team to make it difficult to pass out of defence. They did press occasionally and the game became more interesting; the French were worse defensively, but better offensively, which ultimately a team would hopefully aim to be in an unimportant friendly. The added pressure meant we saw something from Brazil’s midfield that we perhaps take for granted: their close control allowed them to twist and turn away from the French midfield, taking players out of the game – the sort of thing that was missing from the World Cup side.

Hernanes’ sending-off meant some reshuffling was needed for Brazil, changing to a deep passive 4-4-1 with Robinho pushing up on the left of the midfield band. The situation made it somewhat necessary, but the changes suggested a willingness to go back to Dunga’s counter-attacking style of play if it was needed from Mano Menezes, though it was fruitless of course.

France’s goal highlights a problem with passive play – allowing the opposition to play in front of you is all very good when all they do is pass, however it also gives time and space so if the opposition is willing to run directly at you, it is difficult to stop them without fouling them. Brazil failed to do even this so Jeremy Menez was able to stride forward to cross for Benzema.