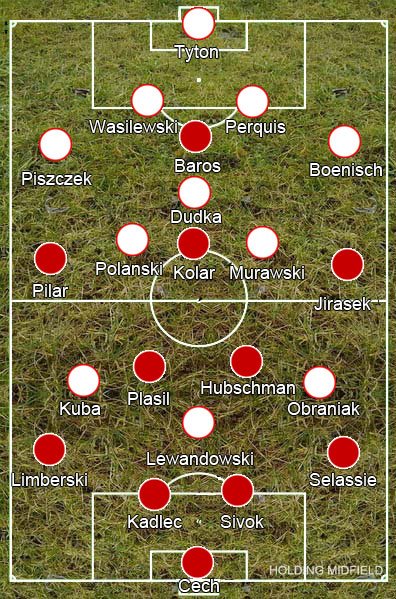 In a tense match bereft of quality, the result was decided by Polandâ€™s main flank: the right one.

With Poland needing a win it was odd Smuda selected the same team that set out to stop a highly efficient Russia side playing on the counter, starting the match in a 4-1-4-1 with Robert Lewandowski up top, Ludovic Obraniak and Jakub Blaszczykowski flanking him and three very deep-lying midfielders in Dariusz Dudka, Eugen Polanski and Rafal Murawski. Michal Bilek was forced to replace Tomas Rosicky with Daniel Kolar because of injury, playing in a 4-2-3-1 with Kolar behind Milan Baros with Petr Jiracek on the right.

The Poles, as in their previous games, favoured the right flank – Lewandowski, Lukasz Piszczek and Kuba looked to position themselves high on the right and overload the Czechs there. Another interesting facet of Poland’s play was that Lewandowski would often drop deep to receive the ball while Kuba and Obraniak would make runs into central areas beyond him with the team shape almost looking like 4-3-1-2. However bar one or two half chances the Poles didn’t look like scoring.

Because of Poland’s three holding midfielders the inevitable happened: the Czechs started to monopolise possession deep in midfield but struggled to get the ball forward. Kolar was squeezed out of the game, forced to find space very high up the pitch and Baros was also cut off from the rest of the midfield. It’s no surprise Tomas Hubschman completed the most passes of all the players on the pitch – 65 – as he had a lot of space to do so. These factors led to a very bland first half.

The second half started as the second half ended, Czech Republic dominating possession deep in midfield but not being able to do anything with it. 56 minutes into the match Kamil Grosicki was brought on for Polanski and Poland shifted to a 4-2-3-1 with Obraniak playing behind Lewandowski, Grosicki on the left and Dudka and Murawski as the two holding midfielders – the Poles finally starting to push for a goal. After the change the Czechs still had a grip on possession, the use of Obraniak as a central winger giving Poland a better chance of creating chances but not of dominating possession.

Vaclav Pilar was starting to get some joy on the left flank and a goal nearly came from his endeavours as he won a free kick, forcing Tyton had to make a good save from the resulting Tomas Sivok header.  Without the protection of three holding midfielders Piszczek’s forays were leaving the Polish back four exposed and Baros was able to drift into the space Piszczek vacated. Inevitably the lone goal came from the Czech left flank: Baros drifting into the space Piszczek left again before cutting inside to play a reverse pass for Jiracek to finish.

Adrian Mierzejewski and Pawel Brozek came on for Murawski and Obraniak respectively – Poland switching to a 4-2-4 with Brozek moving alongside Lewandowski. Poland looked to get the ball wide quickly and get crosses into the box. Bilek made three straight swaps to energise the team as Frantisek Rajtoral, Jan Rezek and Tomas Pekhart came on for Jiracek, Pilar and Baros.

Even after the goal the Czechs weren’t sitting particularly deep and the moderate pressure made it difficult for Poland to move the ball forward. The Poles were able to fashion one last chance at the end – Michal Kadlec’s acrobatic headed clearance stopping the ball from going in, but the game came to a close soon after and the co-hosts were out.