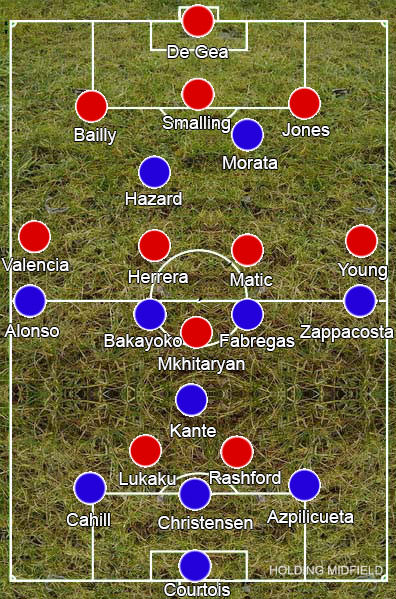 This one seemed a bit more interesting in the build-up than an away trip for a Jose Mourinho team against a bigger side should be, due to Manchester United’s surprisingly attacking display at Old Trafford in April. Mourinho’s lack of ambition beyond grinding out goal-less draws in the away games made another episode of bus-parking likely, but having found a successful tactic against his former club it would make equal sense to continue with it.

Chelsea meanwhile, after poor performances in recent weeks, saw the return of their two best players outside of Eden Hazard – N’golo Kante and Alvaro Morata returning to the fold. David Luiz was also dropped from the squad, as Andreas Christensen started in his place.

Antonio Conte moved back to the 3-5-1-1 he has used frequently this season after last season’s 3-4-3 was brushed aside mid-week in Rome. Missing Paul Pogba, Mourinho also adopted a back three, setting up his team in a 3-4-1-2 with Marcus Rashford partnering Romelu Lukaku.

These matching set-ups created plenty of individual duels all over the pitch, which led to an even opening to the match as both teams looked to attack quickly down the flanks using their wing-backs.

Ander Herrera gained plaudits in April for his role nullifying Hazard, yet it was Eric Bailly that took on the duty here. A good front foot defender, he looked comfortable following the Belgian, who often dropped very deep to evade his marking. This created a problem for United however when Tiemoue Bakayoko started pushing up into the space Hazard vacated: with Bailly gone, Chris Smalling and Phil Jones lost their man avantage, and with Herrera having to drop back to help out with Bakayoko, United began to lose the midfield battle, leaving them pinned back defending. This only worsened as Ashley Young and Antonio Valencia were forced deeper, robbing United of their outball.

The wing-back pairing were also left isolated against their opposite numbers. Bailly’s tracking of Hazard left the remaining four stretched horizontally while the runs of Bakayoko meant the centre-backs were constantly preoccupied and struggled to provide support to the widemen. As Chelsea’s momentum grew, Gary Cahill pushed into United’s half for Marcos Alonso to recycle possession back to, while Cesc Fabregas’ support of Davide Zappacosta on the right was more dangerous than the Italian’s attacking – sitting a little deeper to loop crosses in.

Although Bailly maintained a close eye on him, United had ditched the man-marking of Hazard by the end of the first half. While it gave them a more concrete backline, it didn’t help to stymie where the attacks where coming from, so it wasn’t a shock when Chelsea finally took the lead ten minutes into the second half.

Cesar Azpilicueta faced little opposition as he pushed forward into United’s half, with the away team stuck very deep and the midfielders slow to move across having been dragged over to the other flank. Jones pushed forward half-heatedly but he was so far away from Azpilicueta, all it did was open up space for Bakayoko to run into. Spotting the danger, Smalling moved across to cover behind Jones, but no one covered Smalling as he shifted across, leaving Morata completely free – Azpilicueta duly took advantage, dropping a long pass onto his compatriot’s head to take the lead.

Mourinho finally made some changes a few minutes later, removing the anonymous Henrikh Mkhitaryan for Marouane Fellaini and Jones for Anthony Martial as the team switched to a narrow 4-3-3 formation. It was a more balanced game after the change, but this could equally be due to Chelsea now focussing on protecting their lead – each of Conte’s substitutions a defensive move – although truthfully Chelsea looked more likely to add to their lead than the next goal being a United equaliser.

When two teams line up in matching formations, whoever has the better players tends to win as they are more likely to win their individual battles. While this was the case here, Chelsea dominated the game in a way that surpassed the difference in quality between the two teams. Instead, a handful of movements created a domino effect that saw the game tip in their favour and only grow as United gave up their attacking impetus to try to plug their defensive gaps, until Chelsea finally broke the deadlock. It was an interesting example of how quickly a game can get away from you at this level.