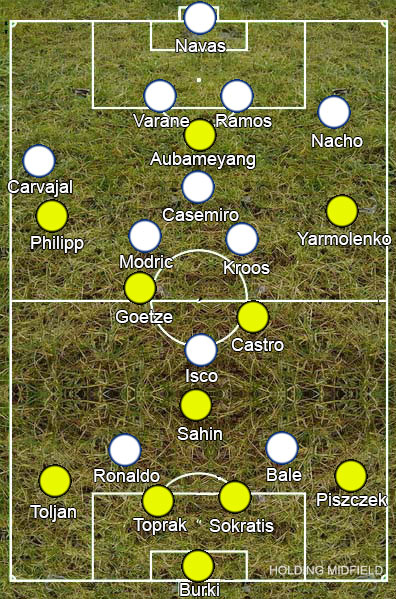 Winning just three of their opening six La Liga matches while their opponents sit atop the Bundesliga, plus a host of injuries to contend with, Real Madrid went into their game at the Westfalenstadion looking weaker than you would expect from a team looking to win a third European Cup in a row. Despite a loss to Tottenham Hotspur in the opening round of fixtures, Borussia Dortmund have made their strongest start to the Bundesliga season in the club’s history, conceding only one goal so far – in a 6-1 thrashing of Borussia Monchengladbach.

Peter Bosz continued with his 4-3-3 formation, putting Nuri Sahin behind Gonzalo Castro and Mario Goetze, and Zinedine Zidane set up his side in a 4-3-1-2 with Isco roaming behind Cristiano Ronaldo and Gareth Bale, who mixed their more natural wide positions with the narrower positions of strikers.

These shapes suited Real Madrid more: Bale and Ronaldo could push up against the centre-backs as they split, Isco could stay on Sahin and the three midfielders and four defenders outnumbered their opposition. This only left the full-backs free, but if the ball was played into them, one of the midfield trio could slide across without leaving anyone free in the middle, trying to trap them on the wing.

Dortmund’s high pressing didn’t really work for a number of reasons. Firstly, they were outnumbered and so to press Real Madrid’s first line, they frequently created shortfalls elsewhere on the pitch. For example, Goetze would often step up to press a centre-back if Pierre-Emerick Aubameyang was marking the other one (Aubameyang generally staying around Sergio Ramos, leaving Raphael Varane free) or if he had pushed up to press Keylor Navas. Castro was then alone against Madrid’s three deep midfielders, so the wingers would have to tuck inside to support him, which then left Madrid’s full-backs free. This is theoretically a similar issue to Madrid’s defending but whereas Madrid has three midfielders to slide across and cover, Dortmund had only Sahin, who already had to keep an eye on Isco, while Bale and Ronaldo’s wider positioning made it difficult for Dortmund’s full-backs to step up. Leaving Nacho free wasn’t such an issue, although Isco would often pull out to the left to ensure an attacking presence on the left, but giving Dani Carvajal the run of the left flank was a massive problem for Dortmund.

The second problem for Dortmund was that the pressing wasn’t particularly effective: all of Madrid’s players are comfortable on the ball, and aren’t likely to panic at Dortmund’s pressing. Instead they were confident to pass it around and draw Dortmund in or dribble past Dortmund’s attackers, who despite running hard are quite weak defensively individually. Isco would also drop back occasionally to overload Dortmund further.

Thirdly, even if they were prone to panicking, Dortmund’s set-up meant that simply hitting it direct was quite effective against them. Bale and Ronaldo were comfortable dropping into the midfield for flick-ons and Carvajal’s freedom on the wing meant they could just hit the ball in his direction and he was in enough space to usually make something of it. Dortmund pressing all the way up to the goalkeeper meant that the defensive line sat close to the half-way line, giving Madrid’s pacey forwards plenty of space to run in behind. It was clear that Madrid were purposely passing the ball in deep areas to draw Dortmund up the pitch, then simply playing it over them to break the press, with Roman Burki having to rush out to bail out the defence several times.

These factors combined for Madrid’s opening goal: Carvajal having the time to float a ball behind Dortmund’s defensive line for Bale to volley home.

With the lead, Madrid adjusted their shape – Isco dropped back to the left of the midfield to form a flat four out of possession. When Madrid had the ball, he would still move ahead of the midfield centrally but there was also a greater allowance for Luka Modric to get forward. Beforehand, the Croatian would push on occasionally yet it was mostly to break Dortmund’s pressing lines, however now he had the opportunity to break forward and join the attack more often. Nevertheless, Isco’s positional shift was presumably intended to be defensive yet it ended up freeing up space around the base of the midfield for Dortmund, making it easier for them to move the ball up the pitch.

Madrid doubled their lead by exploiting the high line again – Bale racing in behind to tee up Ronaldo – yet Dortmund pulled one back. In response, Madrid sat back into their two banks of four, with Ronaldo and Bale now doing a better job of protecting the area ahead of the midfield. Needing a goal, Bosz brought on Julian Weigl and Mahmoud Dahoud in place of Sahin and Jeremy Toljan, switching to a 3-4-3 diamond.

Flooding the midfield with neat passers like Weigl, Dahoud and Castro, they sought to break down Madrid’s blocks. The midfield rotated, trying to draw their opponents up the pitch and, while they could get individual midfielders to follow them into deeper areas, the midfield was congested enough so that the other Madrid midfielders could cover easily. As a result, most of Dortmund’s attacks still went down the flanks and were still ineffectual.

Madrid, on the other hand, countered very effectively. Bale and Ronaldo were joined by Modric, Carvajal, Isco and substitute Marco Asensio, using the width of the pitch to stretch Dortmund’s back three. Ronaldo got a second to seal the win and leave the German side six points off the pace in the group.