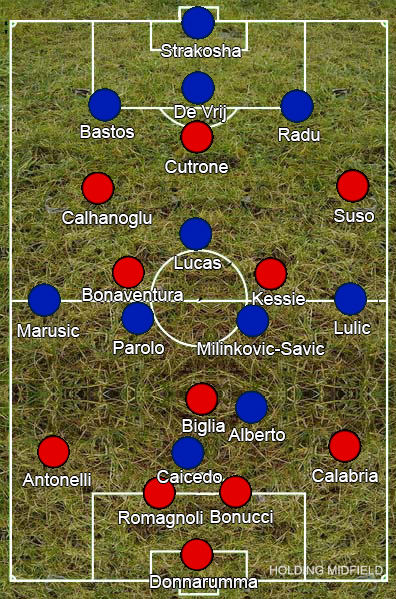 Despite their new ownership spending significant amounts in the summer, AC Milan have once again struggled this season and have turned to another one of their former players to guide them after sacking Vincenzo Montella. Clarence Seedorf, Filippo Inzaghi and Cristian Brocchi have all been given opportunities as head coach and now it’s Gennaro Gattuso’s turn. Inzaghi’s brother Simone has done a good job with Lazio, currently sitting third in the Champions League qualification spots after finishing fifth last season.

Gattuso set up his side in a 4-3-3 formation, while Inzaghi opted for a 3-5-1-1 with Felipe Caicedo’s inclusion for the injured Ciro Immobile the only change from their regular line-up.

Rather than risk leaving space behind the full-backs by having them push up against Lazio’s wing-backs, Milan had their wingers track them back. While ensuring they weren’t caught out by runs from Marco Parolo and Sergej Milinkovic-Savic, it also left them light up front. With just Patrick Crutone up front against Lazio’s back three, they were unable to press and the Romans had little issue playing out from the back.

Either of the outside centre-backs could push up, with both having three easy options: to Lucas Leiva inside, to their wing-back outside and their centre-midfielder ahead of them. Attacking through the left side generally works better for them though, with Luis Alberto trying to pop up in space between the lines, forming a diamond with Stefan Radu, Senad Lulic and Milinkovic-Savic.

Despite them dropping back into a deep 4-5-1 shape, it was actually quite easy for Lazio to play through Milan’s centre. One of Franck Kessie or Giacomo Bonaventura would often try to push forward to support Cutrone defensively but this would only stretch the midfield, and Lucas Biglia wasn’t able to plug the gaps – he’s a generally reactive player and was easily dragged away from the centre by Milinkovic-Savic’s runs, gifting space to Alberto to work in. Lazio’s general gameplan was to the work the ball down the left, then squeeze it into the middle – mostly to Alberto – once the space is available, then quickly switch it out to the right.

This can sort of be seen on their goal, although it’s more blunt: Lulic hitting a high ball in to Alberto to chest down rather than moving the ball along the ground, then Lucas reacting quickest to the ball to slide straight through to Adam Marusic to finish. While it was generally pretty easy for them to work the ball into the final third, they rarely actually threatened though – Milan’s midfield weren’t defending effectively but they still had four defenders and Gianluigi Donnarumma to beat.

Likewise, Milan didn’t find it too difficult to move the ball forward, yet they rarely created meaningful chances either. With Caicedo and Alberto sat in front of the midfield three, Milan were outnumbered in the centre, especially with Biglia at the base of the midfield. However Lazio only had two players out on the wings, leaving lots of space for Milan’s most creative players, Suso Fernandez and Hakan Calhanoglu, although the latter would often drift into central areas.

Milan’s gameplan revolved around playing the ball into the feet of Suso and Calhanoglu as they moved backwards towards the play, while Bonaventura and Kessie or Davide Calabria and Luca Antonelli would make overlapping runs to push the defenders back. With the midfielders or full-backs moving running beyond Suso and Calhanoglu, Lulic and Marusic were caught in two minds: if they follow the wingers, the midfielders or full-backs are free, but if they stay back, the wingers can turn on the ball in space and pick out a pass. They mostly opted for the latter and the capital club often found themselves on the back foot, but Milan faced the same problem as Lazio in attack: they may have had space to use but they were still having to aim for a congested box with defenders, meaning that even if they pulled off an excellent pass, there was still three centre-backs on hand to get it away.

Milan made use of this space in wide areas to score their winner: Calabria simply using the space in front of him to drill in a cross onto the head of Bonaventura, while Suso occupied Lulic.

Neither team played well, but they mostly dealt with the problems the other posed of them. A particularly bad day for Bastos ended up being the difference between them: the Angolan lost Cutrone at the free-kick for Milan’s opener then misjudged the flight of the ball for their winner, allowing Bonaventura to finish unopposed.