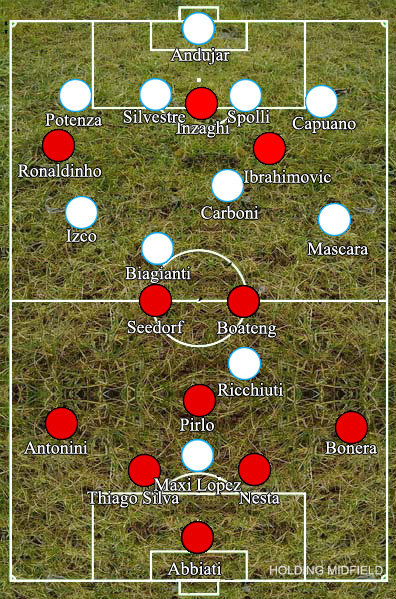 After Milan’s defeat at the hands of Cesena, the reality of the task ahead of Massimiliano Allegri became clearer. In all the hype over the signings of Zlatan Ibrahimovic and Robinho, there were lingering questions over how Allegri was going to fit all of the “Fantastic Four” into his starting team that became more frequent after the Cesena game. Allegri may well have found a solution that would apply to no other coach in the world: pray for injuries.

Inzaghi’s introduction served the same purpose as his substitute appearance had the week before: he was the finishing touch to the creativity of Milan’s other forwards – the perfect role for the epitome of the poacher. Too often against Cesena the front three had the ball around the box, but no player in the box to give it to. With Inzaghi, this is his sole contribution but he does it well. He had two chances – inexplicably missing one and converting the other in his classic almost offside style – both were tap-ins, but Milan needed someone in that position to score.

There was also some improvement in the centre of Milan’s midfield. Often against Cesena, Ibrahimovic had held the ball up hoping for Gattuso and Ambrosini to bomb on. This meant that two players in their thirties were having to cover large distances, made even larger by the forwards not doing any defensive work. Against Catania, Ibrahimovic was the right-sided player (although he very rarely took up this position, playing behind or alongside Inzaghi) and so held up the ball less, meaning less runs were needed from the midfielders. This was quite handy for Seedorf, whose attacking strength is more in his passing, yet Boateng is a younger, fitter, more attacking version of Gattuso or Ambrosini and this role might have suited him more.

This is not to say this was a good Milan performance by any stretch of the imagination, just an improvement on the game against Cesena. Milan’s defence in particular looked shaky and they were lucky not to be down by two or three goals by half-time.

Catania were excellent. Their defensive shape was quite hard to identify, such was its impressive fluidity. Generally they set up in a deep 4-4-1-1 with Adrian Ricchiuti to the left behind Maxi Lopez, but when the ball was played on Milan’s left, Marco Biagianti would push up alongside Ricchiuti with Ezequiel Carboni shuttling to a more central position and the wingers tucking in, creating a 4-3-2-1. When the ball was moved to the flanks, the opposite winger or Carboni would drop back into the defence, forming a 5-4-1 and ensuring the narrow defence wouldn’t get stretched. It was clearly well organised; the second a player vacated his position the players shifted to cover the gap – there was no need for them to identify the gap as they began their movements simultaneously. The fact that there were no new signings starting meant that Catania have been able to develop a mutual understanding, and it showed.

Once they regained possession, Catania counter-attacked impressively with speed. When they couldn’t counter, they still committed men forward, leaving only the defenders and Carboni back, but they generally just slowly passed the ball backwards and forwards between the defenders before hoof up to the five attackers waiting on the half way line.

Catania pretty much gave up on attacking in the second half. Whether this was simply because of tiredness or Marco Giampaolo deciding a point was enough, this was a shame because they were unfortunate not to be winning at half-time and could have easily won the game. The match petered out to nothing. Milan introduced Nnamdi Oduamadi to give some real width on the right, but it did little.

It was a well-earned point for Catania and they were unfortunate not to win. Milan on the other hand, while moving in the right direction, looked poor and can expect to face a lot of teams looking to sit deep and break at speed this season. How they deal with this will determine how their season turns out; as it stands, it’s difficult to see them making the Champions League.