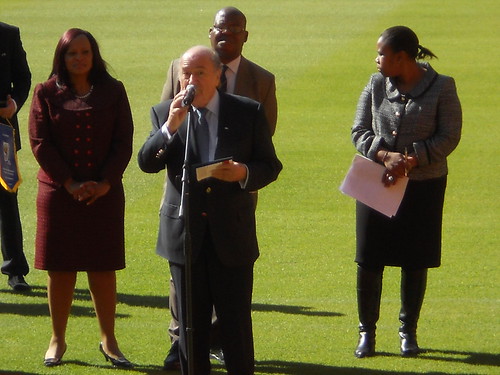 A generation from now, naughty children around the world will be hushed into submission by whispers of a hideous and sinister figure from the darkest corner of history. Disobedient little ones will tremble at the mention of his name, baulk at stories of his villainous deeds and offer prayers that wherever he is now itâ€™s a place far, far away. â€œEat your greens,â€ parents will plead, â€œor Sepp Blatter will come for you in your sleep.â€ The global youth will enter a golden age of nutrition.

He-who-must-not-be-named took a further step towards enshrining himself forever in history as the thing that goes bump in the night with more clumsy sound-bites on the Brazilian crisis earlier this week. A couple of gems glimmer: â€œThis is not our problem, it is a Brazilian problem.â€ To be fair to Blatter he is at least practicing what he preaches, fleeing the country last week to attend the U-20 World Championships in Turkey and leaving the Brazilians to â€˜their problem.â€™ Equally headline-worthy was the Presidentâ€™s assertion that â€œFIFA has come out of this stronger, with [its] image enhanced.â€ Thereâ€™s a flicker of truth to this if we consider what the governing body has been up to over the last 12 months â€“if FIFAâ€™s image is that of a self-serving boysâ€™ club engineered to further the business interests of its Executive Committee then the last two weeks in South America have enhanced it in glorious high definition. So you have to say, really, fair game Sepp.

In fact maybe itâ€™s about time we all started being a little fairer in our judgements of the Brazilian up-rising. Or at least broadening our horizons when thinking about the countryâ€™s immediate future and its relationships with its government, with FIFA and with the game it loves. Brazil is a country with a mess on its hands and with the World Cup still a year away itâ€™s difficult to see how the situation wonâ€™t worsen before signs of improvement can be seen. The Brazilian voters are engulfed in a fury that is unlikely to temper until after FIFA have packed up and left but through the riots, the tear gas and the damning press reports has the time come for a real discussion about whatâ€™s next for footballâ€™s most successful nation? Broaden the debate and we might even find that FIFA arenâ€™t quite the noxious presence weâ€™re so ready to believe.

Much has been made of the $13 billion of public investments made in preparations for the big event next summer whilst basic education, transport and welfare provisions fail to grow and FIFA cream off a healthy $4 billion in tax-free profit from the tournament. The people, disenfranchised and suffering, need someone to blame and the football authorities are the most conspicuous target for a reaction, but FIFAâ€™s role in the World Cup is in effect little more than the glorified head of a franchise. The money that Blatter and co will collect as profits is really just the money that the host nation pay to hold the franchise for a finite time â€“ to use one of the most recognised brands in the world to attract visitors, attention and investment to their shores. After that the whole thing becomes a distinctly domestic affair.

The dissenting tune being sung at a hundred cities across the country is that money should be being invested into a failing state infrastructure before it is poured into vanity showpiece sporting events, especially in a part of the world where millions live below the poverty line. But a statistical appraisal of the situation paints an improving picture. The Gini coefficient which measures distribution of wealth shows that since 1995 the population has become less disparate in its standard of living, unlike in parts of the developed world where the gap between rich and poor is widening. Notwithstanding that a change of government since 2009 has seen accusations of financial corruption against the leadership soar, Brazil is a country slowly getting its house in order in terms of how it provides for its people. The minimum wage has risen almost four-fold in two decades, attainment in primary education almost doubled and long-term trends point to a nation steadily getting it right.

These numbers will be of little consolation to the tens of thousands who have taken to the street in protest against a government that is failing on so many social fronts to engage with its people, less still to the direct victims of state corruption and police brutality, but there is enough evidence to suggest that handled properly the massive investments made in the World Cup can still pay off for ordinary Brazilians. The London Olympics were followed by quarterly growth of 1% in the British economy and the event has been lauded for delivering a spiking moment in a flat-lining economy, offering a moment of hope in the midst of a stubborn recession. South Africa saw its advertising industry explode in 2010, a legacy which has been sustained once the world had averted its gaze, and the country has been totally rebranded as a tourist destination and investment prospect in the three years since.

FIFA are often criticised for failing to leave a lasting legacy for its host nations but the question here is one of placing responsibility. The World Cup offers a springboard for growth and investment opportunities, both domestic and international, but itâ€™s never been part of the deal that the football authorities should hang around to supervise later on. Too often the Exec Com are a convenient scapegoat when industry at home fails to capitalise on a short term boom.

None of this is to suggest that the Brazilian riots arenâ€™t are a legitimate reaction to a relationship between rulers and ruled that simply isnâ€™t working but before solutions can be found a fairer appraisal of the situation needs to be made. Who are the bad guys here, really? The problems were there long before the cohort from Zurich touched down for the Confederations Cup and nothing interferes with the pursuit of progress like an easy scapegoat. Change is needed in Brazil and if 2014 is to go off peacefully it is needed fast. But a message to the bearers of the FIFA GO HOME banners â€“ check your pace. An opportunity is about to present itself in Brazil to build on an encouraging twenty years of growth and any dialogue moving forward must be focused on repairing a relationship between the elected leaders and their people. Just for once Blatter might not have all the answers.