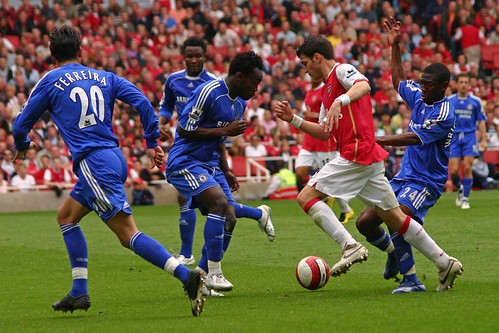 Since the break-up of the Invincibles side, Arsenal haven’t had much success. A stage of constant transition has resulted in the likes of Cesc Fabregas, Samir Nasri and now Robin van Persie looking to move on, setting Arsene Wenger’s side back as quickly as they can progress forward. There was one season were everything looked to be clicking though.

In 2007-08, Arsenal made the strongest start of the title challengers, going unbeaten until December. Their game was built on the neat passing triangles of their midfield beating the straight lines more common in England; their midfield featuring no proper wingers, drifting at will.

Fabregas requires no introduction, but his defensive shield Mathieu Flamini offered a more flexible option than Gilberto Silva had previously. In his first season as the first-choice defensive midfielder, Flamini provided stability to an otherwise lightweight midfield without sacrificing the classiness of Arsenal’s play, keeping everything tidy. Meanwhile Tomas Rosicky, prior to his injury troubles he struggled with from the second half of the season onwards, would drift in from the left, a clever little dribbler and passer. Aleksandr Hleb on the right was has been the most stereotypical Arsenal player of this era: a great slight dribbler knitting play with neat passes, yet frustrated fans with his refusal to shoot.

They played some of the most attractive football the Premier League has seen, yet whether it was the cumulation of fatigue from the lack of rotation or a mental breakdown after the infamous Birmingham game, Arsenal ended up getting nowhere. Rosicky ended up in a cycle of injuries until his recent comeback, the underappreciated Hleb left for Barcelona and Flamini improved his wage with a bosman move to AC Milan.

The Total Football of the Dutch may have got the world’s attention at the start of the seventies, while the West Germans had their own brand of fluid football, but there was a flexible trio strutting their stuff in England too. That Everton’s Holy Trinity didn’t get as much attention as they deserved isn’t surprising : manager Harry Catterick shunned the spotlight, disliking televised matches and having to give out information about his team to the press, due to him not wanting opposition managers to figure out his side.

As part of England’s World Cup-winning team, Alan Ball was the most famous of the three. Energetic, a clever dribbler and a good passer, what really set Ball apart was his fierce determination. Obsessed with winning, Kenneth Wolstenholme said Ball was “running himself daft” in the 1966 final – stamina and drive he brought to Everton too.

Originally a defender although not particularly good in the air, Howard Kendall was moved into midfield when he joined Everton. Kendall is better remembered for his time managing the club, and rightly so, but he was a classier player than his defensive start suggests – another quick passer who could dribble too.

Despite the other two getting more attention, Colin Harvey was probably the best of the trio. Albeit a touch slower than the other two, he was still a fine physical specimen and had the best touch and passing ability. With the Holy Trinity in midfield, Everton won the league at a canter, finishing 9 points ahead of Leeds.

The side that announced Jose Mourinho to the world may have been a touch fortunate on their way to the 2003-04 Champions League crown, nevertheless Porto had plenty of quality at their disposal.

Costinha sat in the holding role of the midfield diamond. Not all that physically imposing or impressive technically, it was his brain that made Costinha one of Porto’s key men. His positioning and reading of the game made him capable of snuffing out the opposistion’s attacks, relieving defensive duties on the rest of the side.

Ahead of him as the two carilleros were Pedro Mendes and Maniche. Both were fundamentally box-to-box players, offering a bit more bustle in front of Costinha. Mendes was the less athletic of the pair, relying more on his passing ability with his long range shooting a bonus, while Maniche was more of a runner, possessing a better touch than the stereotypical box-to-box player, but still primarily a jack of all trades.

At the tip of the diamond was Deco, the man who nearly squeezed Xavi out of Barcelona, but here he played as an attacking midfielder rather than the deeper role he would later excell in. Behind the strikers, Deco had little defensive responsibility, allowing him the freedom to slide through balls between defenders, take them on or give an option for the strikers to lay the ball off.

Unsurprisingly, none of the midfield stayed on at Porto for more than another season, attracting interest in their own talents as well as their manager’s, but only Deco had much success.

Greece’s updated brand of catenaccio may have spoilt the memories of Euro 2004, but the other underdog to impress at the championships were a bit prettier. Karel Bruckner’s Czech side lined up with three attacking midfielders behind the big man and quick man combination of Jan Koller and Milan Baros, while the full-backs provided width.

The presence of Tomas Galasek in front of the back four perhaps suggests he had a greater influence than he actually did because of the rarity of defensive players in the system. Galasek was as much a deep-lying playmaker as a defensive midfielder so, although decent, he wasn’t exactly key to the side.

Rosicky’s ability has already been discussed, but the aging Karel Poborsky or Vladimir Smicer ran him close on the opposite side. The most important of the attacking midfielders was of course Pavel Nedved though. The then-European Footballer of the Year had pretty much everything you would want from a creative midfielder, and it was his injury in the first half against the Greeks that played a major part in the Czech’s demise.

What made the attacking line-up work was that all of the attacking midfielders were willing to put in a defensive shift too, meaning Bruckner didn’t have to throw in a load of defensive players to cover them, unlike some…

It’s difficult to think of a greater broken midfield than the French team that won the 1998 World Cup. Set up in a 4-3-2-1, Aime Jacquet was able to give Zinedine Zidane, one of the greatest playmakers of all-time, and Youri Djorkaeff, one of the better playmakers around at the time although he played closer to Stephane Guivarc’h, the freedom to create, protected by the three defensive midfielders.

Didier Deschamps was essentially the template water-carriers were measured by, as Claude Makelele would go on to become, while Emmanuel Petit and Christian Karembeu offered a bit more of an attacking threat, but were still primarily defensive players, also covering for Bixente Lizarazu, Lilian Thuram and Marcel Desailly when they wanted to venture forward.