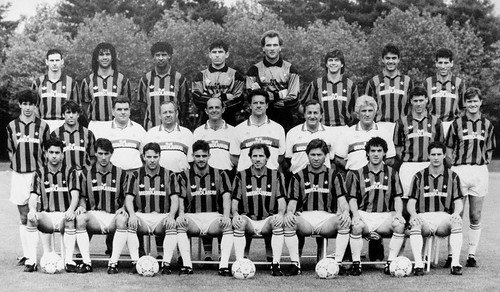 On the 18th of May 1994, Fabio Capello became a European champion for the first and only time in his career. Having spent the week listening to the taunts of his opposite number Johan Cruyff over the boring style he employed compared to his predecessor Arrigo Sacchi, Capello’s Milan took the more impressive Barcelona Dream Team apart in quite possibly the most complete performance a team has given in a European cup final, despite missing their defensive heart Franco Baresi and Alessandro Costacurta, star striker Marco van Basten and the world’s most expensive player Gianluigi Lentini.

However, the issue with that match when discussing Capello’s Milan is that, although it was undoubtably his crowning achievement and thus the game he will be remembered for, it was an anomaly from what was, despite its talents, a really rather dull side.

A brief caretaker period in charge of them before Sacchi’s arrival and some time with their youth team aside, Milan was Capello’s first coaching job in football. After the exciting tenure of Sacchi and his all-star Gli Immortali side, the appointment of one of Silvio Berlusconi’s company men didn’t exactly set the world alight. Even with hindsight, it’s difficult to tell whether that view was right or wrong. It is difficult to criticise a 58 match unbeaten run (earning the side the nickname Gli Invincibili), four out of a possible Serie A titles and three European cup finals, but the style of football Capello employed must have come as a bit of a shock to the system bearing in mind the football Sacchi had Van Basten and co playing.

Just like Sacchi, Capello adopted a 4-4-2 formation, however he didn’t share Sacchi’s feelings on universality, preferring a more pragmatic approach at the height of Italian football’s defensiveness. No longer were all eleven players expected to press the opposition – when they weren’t ahead, they would be expected to close down the opposition if they got quite close, with their teammates tucking in to cover gaps, but otherwise Milan’s players would drop off and wait for the opposition to come to them. Once they got their goal, Milan would shut up shop, relying on the magnificent defence of Mauro Tassotti (replaced eventually by Christian Panucci), Paolo Maldini, Baresi and Costacurta to protect Sebastiano Rossi.

Roughly the same core of players had resulted in two very different styles of play. Whereas Sacchi wanted everyone involved in attacking, Capello set it up so only a handful were needed, and while Sacchi wanted his side to be proactive in regaining the ball, Capello’s Milan were simply able to sit back and soak up pressure. What Capello did makes it sound as if he had simply spoiled Sacchi’s team, but making them less entertaining doesn’t necessarily result in a team of a lesser quality. Sacchi’s side played great football and winning back-to-back European cups is an astounding feat, yet they managed just one Serie A title, sneaking just ahead of Diego Maradona’s Napoli in 1988, while Capello’s medal haul was more substantial. In the 1993-94 season, Milan managed just 36 goals, but conceding just 15 goals meant it wasn’t an issue.

With Berlusconi still trying to win the affections of the Italian public, he continued to plough money into Milan, bringing in the likes of centre-back Marcel Desailly, playmaker Zvonimir Boban and Dejan Savicevic. Desailly was a great example of Capello’s switch to a more defensive style, converted into an excellent defensive midfielder to sit alongside the Andrea Pirlo-esque Demetrio Albertini, while Boban was generally played out wide, creating a narrow midfield to suit Milan’s defensive structure.

Despite his defensive stance, Capello still needed to get goals from somewhere and for that he had a wealth of attacking options. His attitude to his attackers was innovative though: having the spending power to create a large squad meant he was able to employ the first examples of a rotation system. The revolutionary approach to squad selection didn’t go down well with many of his players, Capello falling out with Savicevic, Ruud Gullit and Paolo Di Canio among others during his tenure, but it ensured his creative players couldn’t rest on their laurels. The pressure of constantly having to prove themselves may have unsettled Milan’s attackers, nevertheless it made sure that those attackers had to perform if they were going to keep their place in the team, forcing them to make full use of their creative ability.

Despite their near-spotless domestic record, the fact they only won one European cup could act as something of a black mark, particularly at a club like Milan that values continental success higher, but the questionable validity of Marseille’s 1993 win, the perfection of the 1994 win and the bonus final a year later mostly cancel it out. The style of football the team used may not have been as great as some of the others on this list, but you can’t question the greatness of the side itself, whose achievements speak for themselves.