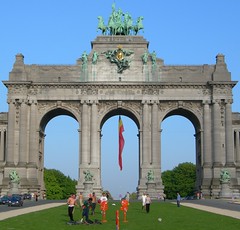 Belgium have not been to a major tournament since the World Cup in Japan 2002. A tough group, including Germany, Turkey and Austria, in which Belgium sit 4th and a side in a constant flux of change coach-wise ensures they more orÂ less have given up any hope of going to Ukraine &Â Poland 2012.

Instead the Red Devils, population 11 million, will pin their hopes on Brazil 2014 and there is much to get excited about looking forward 3 years. Belgium have a mix of talented established stars and many emerging young players – a squad with a potentially bright future.

A lack of money in the Belgian game, as well as an increasing amount of immigration into the country, forced the likes of Anderlecht and many other big sides in Belgium to look around them, with Germany, France and the Netherlands becoming conveyor belts for talent. Anderlecht invested heavily into their youth system, in search of an efficient use of resources.

The fruits of their labour are beginningÂ to reap rewards for Belgium sides. Fellaini was sold to Everton for Â£15m and there is an increasing interest from the big clubs in the talent of the Jupiler league, with plenty of emerging talent about to make big money moves in the summer.

Belgium already have an collection of players who are plying their trade in the Premier League, becoming household names and certain starters in the first eleven.

Thomas Vermaelen, aged 25, has beenÂ immenselyÂ missedÂ at Arsenal: his leadership, defensiveÂ steel and abilityÂ has been lacking in an Arsenal side that has struggled to hold onto a lead or protect aÂ vulnerableÂ defence. It can’t be said that Arsenal have had a terrible season, but unless they can keep up with the title raceÂ it could be another trophyless one. Without the injury problems that have dogged Arsenal, it could have been a very different season, and it could be said Vermaelen’s absence has been felt much worse than any other.

With the versatilityÂ to play in midfield and as a defender, Vincent Kompany, 24,Â  has made himself a realÂ asset to Manchester City. His performances at the back have impressing many in the Premier League. Manchester CityÂ paid onlyÂ Â£6mÂ for Kompany: a snip at the price of many players around him. The recentÂ Manchester derby demonstratedÂ exactly what the former Anderlecht and Hamburg player was all about: making 46 passes, only misplacing 4 of thoseÂ  down the wings in releatively safe territory, and not losing any of his challenges.

WhileÂ Fellaini, 23, offers an all round option. A presence in midfield, tall and strong, while having the technical ability to pass the ball, findÂ space and hold it up. David Moyes has used him in a variety of roles for Everton. There is little he can’t do in the middle of the park.Â His versatility could gives Belgium plenty of options to build a squad and slot him in where they see fit.

The most sought after midfielder in Europe, Lille’s Eden Hazard, is aÂ prodigyÂ of two professional footballers. A winger with pace and trickery, whose control of a football is something to behold, the ball sticking to his toes. Many have likened him to Cristiano Ronaldo – able to play on both wings effectively or coming inside to take his chances on goal, he has been a trail blazer in a defensive Ligue 1.

Back in Belgium, Steven Defour and Axel Witsel have played a huge part in Standard Liege’s recent successes. Defour has been heavily linked with Manchester United; his energy, vision and passing ability isÂ exactly what Manchester UnitedÂ midfield has lacked this season, he would seem to be a perfect fit. Alongside him is the more traditional box-to-box midfielder, Alex Witsel is a great talent who seems to have been dogged and overshadowed by one horror tackle.

Up front is an 6′ 4” giant of a young man. At 17 Romelu Lukaku is being compared to Didier Drogba for his confident touch as well as his ability to batter offÂ  many a defender with his physique. Excitingly at 17, Lukaku looks a much better player than Drogba did at the same age and has the right attitude to could make him one of the best forwards in Europe, just needing a bit of work on his technical skills to become world class.

These are just the highlights of what is becoming a fine crop of players, ignoring the likes of Boyata, Bailly, Mignolet, Alderweireld and Dembele all in their own rights gaining plaudits for the future.

Need for Unity and Maturity

With muchÂ excitementÂ that this talent squad bring. Different factions have developed in the side, with infighting and reports of young players less than professional antics, while the old guard and new rub each other up the wrong way.

It will be a tough job for Georges Leekens to build unity within the side and convince the modern rich footballer that they are still unproven stars as many seem to feed their ego. The fans have turned their back on the national side and these are the players entrusted to win them back by fulfilling their potential.

Having so much talent coming through all over the pitch is an exciting prospect for Belgium and the world as they look to mature and peak come 2014.

You can read more of Tom at Touchline Shouts and his Football Manager blog FM Pundit or follow him on Twitter.