With the release of his second autobiography, the football news has been flooded with an abundance of stories from Roy Keane’s career. Individually, they are quite amusing – him deciding against signing Robbie Savage when his “whassup” answering machine message reminded him Savage is a terrible human being or the realisation that a move to Celtic might not be everything he had hoped when he found poor John Hartson stuffing his face on the bus – but the more you read, the worse Keane appears.

With each snippet, it becomes more and more clear why Keane has failed as a manager – the deeply-ingrained joylessness must make him a exhausting to work with, however justified his criticisms are. He increasingly comes across as a footballing Holden Caulfield, claiming superiority on endless negativity to the extent that you simply start to pity him.

This makes it as good a time as ever to remember when he was a leader of men rather than the leader of edgy psychopathy-fetishising manchildren. And when it comes to that, there’s no greater example than the victory over Juventus that sealed Man United’s place in the 1999 Champions League final.

United were still fighting on three fronts for a historic treble, but the Juventus side that had wowed under Marcello Lippi had undergone a collapse. A serious knee injury to Alessandro Del Piero derailed their season early on, with Carlo Ancelotti replacing Lippi in February as Juventus would go on to finish a lowly 7th. At this point in his career, Ancelotti was still wed to the 4-4-2 based on the Milan team he played in under Arrigo Sacchi, leading Parma to the high end of Serie A but alienating Gianfranco Zola and turning down Roberto Baggio out of tactical stubbornness. With Zinedine Zidane the star of Turin, Ancelotti would have to be pragmatic for the first time in his career, developing into the world-class coach we see today.

While the match has come to represent United one-upping a team they had faced frequently in the years prior and establishing themselves as a European heavyweight, to Juve it was more about saving face in a disastrous season under a coach coming to grips with management at the highest level. 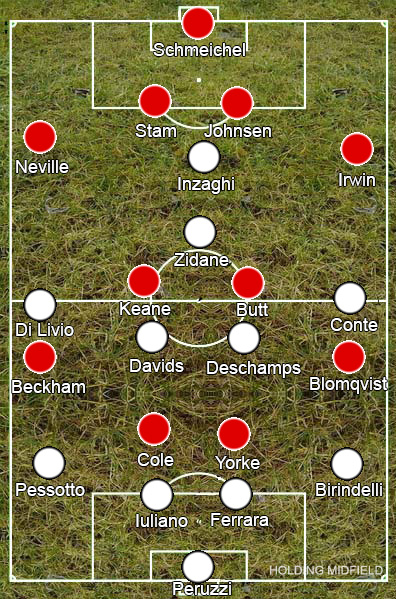 Juventus lined up in a 4-4-1-1, with Ciro Ferrara replacing the injured Paolo Montero and half-fit Zidane playing off of Filippo Inzaghi. Sir Alex Ferguson went with the usual 4-4-2, favouring Nicky Butt over Paul Scholes in midfield and reuniting Andy Cole and Dwight Yorke up front.

Within ten minutes Inzaghi had put Juventus two goals ahead and bookie odds on a United win ballooned very quickly. Neither goal was anything special (it was Inzaghi after all): the first a tap-in scrambled from a corner when Gary Neville pathetically failed to keep on top of Inzaghi and the second a deflected loop over Peter Schmeichel when Jaap Stam seemed to have Inzaghi cornered. Yet after the first goal, the game was falling into the distinct pattern expected when an English team faced continental opposition: United were energetic and pushed lots of men forward, passing it back to the defenders for them to send a high ball in, while Juventus sat back and broke through the midfield with short, quick forward passes.

It was the typical 4-4-2 versus 4-5-1 match-up. With Zidane looking to position himself behind them, Keane and Butt were caught in two minds. Step up and Zidane had the space he wanted between the lines, but sit back and the Juve midfield had too much time, with Edgar Davids darting forward between them constantly. United’s backline could step up to close this space if Kean and Butt pushed forward, although this would increase the risk of Inzaghi going one-on-one with Schmeichel – Ronny Johnsen and Stam already struggling to deal with the poacher as he squirmed his way out of their grip.

Th trade-off was that Juve didn’t have the spare man at the back the United defence did. The mutual understanding between Andy Cole and Dwight Yorke meant they would always pose a danger if United could get it into their feet – Ferrara’s desire to stick close to his man meant he was as likely to be sold a dummy as he was to snatch the ball ahead of them – but Juve’s control of the midfield left them fighting for high balls too often.

Which is where Keane comes in. At risk of Juventus running away with the tie, United’s captain powered ahead of Juve defenders to head home a corner. Ten minutes later, he miscontrolled a pass and hacked down Zidane before he could escape with the ball, earning himself the yellow card that ruled him out of the final. The rule was described as “draconian” by the commentators even back then, but, unlike Paul Gascoigne at Italia 90, Keane just gone on with it. “I didn’t think I could have a higher opinion of any footballer than I did of Roy but he rose even further in my estimation against Juventus,” Ferguson said. “Roy seemed to redouble his efforts. It was the most emphatic display of selflessness I’ve seen on a football field, inspiring all around him.”

Not long after, United equalised. Gary Neville sent a long ball forward, David Beckham won the ball unchallenged in the air, laying it off for Cole to cross to Yorke. The goal owed itself to the partnership between Cole and Yorke, but it was the latest in a string of incidents where Juve’s defence had been weak. The Italians had largely been in control but the defence never looked like holding out once Keane’s header went in. For the first time in the semi, United had been in front, currently going through to the final on away goals.

Ancelotti made two substitutions at half-time, bringing on Paolo Montero and Nicola Amoruso for Mark Iuliano and Alessandro Birindelli. Montero had been key in keeping United at bay in the first leg, but wasn’t fit enough to start the second, forced into playing in the second half by an injury to Iuliano. The removal of full-back Birindelli for forward Amoruso saw Juve change to a 4-3-1-2.

Gaining what was essentially a lead completely changed United’s approach however. United’s midfield were previously caught between a rock and a hard place defensively: they needed to cover the space where Zidane operated in front of the defence, but also needed to actively chase the ball, otherwise Juve could just hold onto possession and waste time. With the lead, that need to offer an attacking presence was lifted so Cole and Yorke stayed forward while everyone else dropped back.

Mid-way through the half, Paul Scholes was introduced in place of Jesper Blomqvist, narrowing the midfield further, although it came at a cost – a yellow card for a trademark two-footed lunge at Didier Deschamps ruled him out of the final too. While United’s midfield had struggled to get involved in the first half, their stricter role in the second half helped them – Keane especially, on hand to claim the ball whenever it fell loose.

It’s not unfair to say that it should have been harder though. Serie A boasted the world’s best players, but had reached a stage of outright tactical paranoia in the mid-nineties after the boom of Sacchi’s Milan, Diego Maradona’s Napoli and the German trio at Internazionale. Juventus were the perfect example: four defenders, a water-carrier in Deschamps, two combative but uncreative midfielders in Antonio Conte and Davids, a nominal wing-back in Angelo Di Livio, the least creative attacker you can get in Inzaghi and the easily forgotten Amoruso. The only actual creativity came from Zidane and he would only really appear for the big occasion. They could move the ball forward easily when there were gaps in United but once those closed up in the second half chances were few and far between.

Not that Juventus helped themselves. Di Livio had been one of the brightest attackers in the first half, really troubling Neville as Inzaghi ran diagonally out to the left and Davids ran beyond him, yet he was moved out to the right with Birindelli taken off and Juventus no longer stretched United’s backline.

Montero had been a major boost to Juve’s backline, but a woeful attempt at either bringing down the ball or kicking it away when he should have headed it fell straight to Yorke. He skipped past the centre-backs and was brought down by Angelo Peruzzi, with Cole on hand to score the follow-up. It sealed their place in the final where they would again stage a dramatic comeback to lift the trophy, but the style of football was unsustainable for the top level of European competition, shipping 16 goals. The acquisition of Juan Sebastian Veron was the first step towards a more patient style, however it wasn’t until Keane was long gone that these changes bore fruit, meaning the Irishman never got to play at the pinnacle of club football.