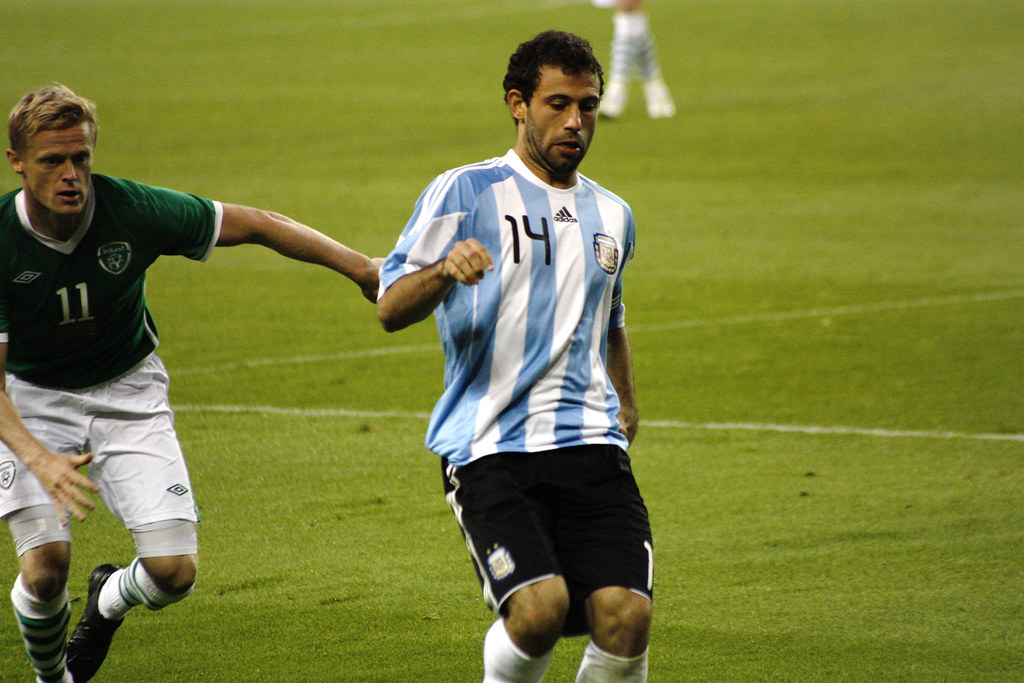 It’s staggering that â€œEl Jefecitoâ€ (the little chief) is only 26 years old. In his career heâ€™s a two time Olympic Gold winner, a champion in Argentina and Brazil and the captain of the Argentine national side â€“ a team he made his debut for before his club. But thatâ€™s only telling half of the story: Javier Mascheranoâ€™s also been relegated to the West Ham reserves, his constant usage at Liverpool is seen as one of the reasons that Liverpool fell from grace and he now can’t get into the Barcelona starting eleven.

It was through his burgeoning international career that he garnered many of his early plaudits, starring in the U-17 Championships in 2001 and the Olympics in 2004. However, although he went from strength to strength for Argentina and got his first international cap in a friendly against Uruguay in July 2003, he couldnâ€™t break into the River Plate first team, where captain Leanardo Astrada was ahead of him in the pecking order.

It was the 2003-2004 season where Mascherano made 20 appearances and began to become a regular fixture in the River team, a season in which River won the Clausura and reached the Copa Libertadores semi-final. And it was also this season that Mascherano started attracting interest from several La Liga clubs, including Real Madrid and Deportivo La Coruna, although nobody was willing to meet Riverâ€™s valuation. In the following season Mascherano became even more integral to the River side but the club struggled throughout the season.

After the 2005 Confederations Cup, Mascherano joined Brazilian side Corinthians for $15m, but his first season was cut short following a fracture in his foot that ruled him out for 6 month. Mascherano watched from the sidelines as Corinthians won the Brazilian Serie A championship, captained by a player he’d become synonymous with, Carlos Tevez.

Mascherano returned to full fitness for the round of 16 of the Copa Libertadores, where his former side River Plate knocked Corinthians out. Coupled with this, things werenâ€™t going well on the domestic front: Corinthians battling relegation before the season was interrupted for the 2006 World Cup in Germany. Mascheranoâ€™s performances in the World Cup attracted suitors all across Europe but he stated he wanted to return to Corinthians to help them fight relegation and wanted to postpone any transfer until the January 2007 European transfer window. However, hours before the window closed, Mascherano and club-mate Carlos Tevez joined English side West Ham United.

The circumstances regarding this bizarre transfer have never fully revealed, with many rumours at the time saying that the only reason Mascherano and Tevez signed for West Ham was due to their agents, Media Sport Investments, having Â an interest in buying West Ham.

Speculation of various different stipulations in Mascheranoâ€™s contract dogged his time in London, where he only appeared 5 times for West Ham. In his 5 months at the club, he had gone from one of the hottest properties in the world to turning out for the West Ham United reserves.

Another last minute transfer deal in the following transfer window saw Mascherano signing on loan at Liverpool, where he would eventually sign on a permanent basis and became a regular fixture for 3 years. In this time he would solidify his reputation as one of the best defensive midfielders in the world and become captain of his country before moving to Barcelona in the summer of 2010 for a reputed Â£21m, with personal reasons being cited as why he wanted to leave the club.

Since signing for Barcelona, heâ€™s struggled to make the impact that was expected, with him being mainly consigned to the bench. The signing seemed a strange one at the time for Barcelona as their first choice, Sergio Busquets, was coming off a very successful World Cup and Mascherano wasnâ€™t likely to play ahead of Xavi or Andres Iniesta in the midfield trident Barcelona employ. Where he would fit into the Barcelona side wasn’t apparent – althoughÂ Mascherano is undoubtedly one of the most successful proponents of destructive football, he can be seen as a very one-dimensional player whoÂ doesn’tÂ offer any creativity or attacking intent, which is something that is a tactical staple at Barcelona under Pep Guardiola.

In Rafael Benitezâ€™s much-maligned final year in charge of Liverpool it was his avowed usage of Mascherano and Lucas Leiva that was seen as the primary pitfall. Neither player was ever likely to take on any attacking onus, and although it was primarily Liverpoolâ€™s defensive frailties that caused many of their defeats it was Benitezâ€™s insistence on this formation that caused the most unrest amongst the majority of the English punditry.

The reasoning for this insistence is varied and disputed, but Benitezâ€™s staunch belief possibly grew from the 2007 Champions League final, where he took off Mascherano â€“ who had controlled Kaka for entirety of the 80 minutes he was on the field alongside Xabi Alonso â€“ to bring on another attacker in Peter Crouch. This change lead to AC Milanâ€™s second goal as Kaka was left free to pick a pass for Inzaghi. Indeed, Benitezâ€™s belief, generally, is that controlling the game and effectively playing a game of ratios on possession is far more likely to yield results than throwing on more attackers to the detriment of control. One which arguably became completely ingrained into the way he proceeded with Liverpool after the 2007 final and was one which suited the type of football Mascherano plays.

Claude Makelele is seen as, or certainly in England, the archetypal defensive midfielder. Players of this ilk are perhaps more able tactically rather than physically, more able at disrupting play through reading the game and intercepting passes, which Mascherano does have in his game, but not to the same extent. Mascherano is a player who is more about physical stamina and tackling rather than taking up spaceÂ tactically.Â To compensate for this he was always coupled with one of Lucas Leiva or Xabi Alonso when at Liverpool, players who were more in this mould and who could cover for Mascherano as he went on his mad dashes to crush opposition players.

As a destructive force Mascherano is second to none, but the problem he has is that his game has developed so that he is likely to leave space in front of the defence and needs somebody alongside him who can fill that space. That is not to say that Mascherano is as mad as a dog and a liability in every game he plays, but he will never be a player who can provide stability and solidity like Alonso or Lucas.

Upon Xabi Alonsoâ€™s leaving for Madrid in the summer of 2009 Benitez was faced with the conundrum of Mascherano being a necessity, but a costly one. Lucas, for all his positives, was never going to be as metronomic as Xabi Alonso was and with Alberto Aquilani, who was meant to replace Xabi Alonso, needing resurrecting from the dead for most of the season Liverpool were left with very few options.

This left Benitez with two very defensive minded players, essentially creating a broken team, which in theory isn’t a major drawback, but the problem with this in this instance was that the attacking players Liverpool had were more grafters than skilful and Liverpool struggled. It says a lot that a fair majority of Liverpoolâ€™s attacking impetus fell on Glen Johnsonâ€™s shoulders, as his marauding runs from full back were the avenue Liverpool could use to find their way through a defence now they had lost the offensive spine to the team in Alonso. 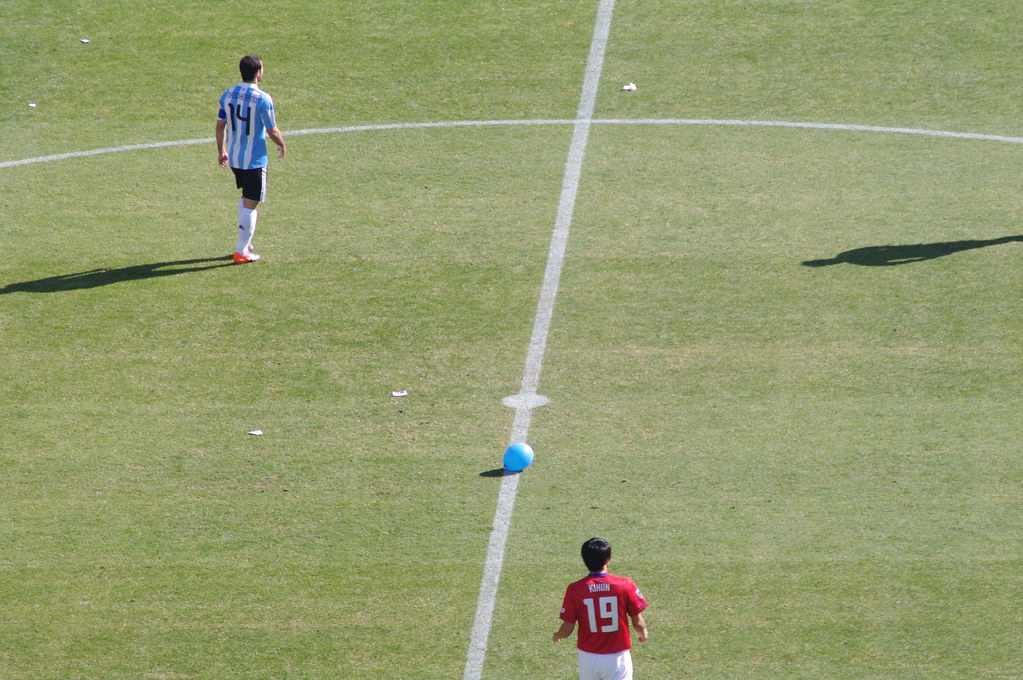 This brings the argument of how successful Mascherano can truly be to a team into focus. It could be said he was one of Liverpoolâ€™s most valuable players, but it could as be argued that he was one of the reasons for Benitezâ€™s eventual downfall.

In an age of football where players are required to be more than just one entity on the pitch, a player like Javier Mascherano is always going to struggle unless he plays for a team that is built around him. This is what makes his transfer to Barcelona all the more peculiar, as Mascherano will never provide the defensive pivot that Busquets provides.

Busquets regularly drops into central defence and allows Barcelona to form a back three, but whether Mascherano could ever be trusted to fill this position is debatable. With the onus on his abilities being to go out and effectively attack the player on the ball, rather than to wait for opportunity to pickpocket the player, he isnâ€™t a player who naturally fits into this tactical model. Thatâ€™s not to say heâ€™s bound to be a failure, but he isnâ€™t readily applicable to Barcelonaâ€™s style of play defensively or offensively where even Busquets is prompted to go forward and use his skill to go past players and play offensive passes, something which doesnâ€™t naturally come to Mascherano.

Utilised in Liverpoolâ€™s 4-2-3-1 with a defensively dynamic ball-user alongside him, Mascherano excelled and was heralded as one of the best defensive midfielders in the world but whether heâ€™ll ever be able to fit into a side that doesnâ€™t structure itself around him is yet to be seen. It could well be that his most successful spells will be his time with Liverpool with a manager who knew how to utilise his abilities and balance the side to curtail the problems he causes, and this would be a great shame for a player who is undoubtedly one of the best players of the 21st century.

6 thoughts on “Javier Mascherano: The Best Player You Can’t Really Afford To Play”