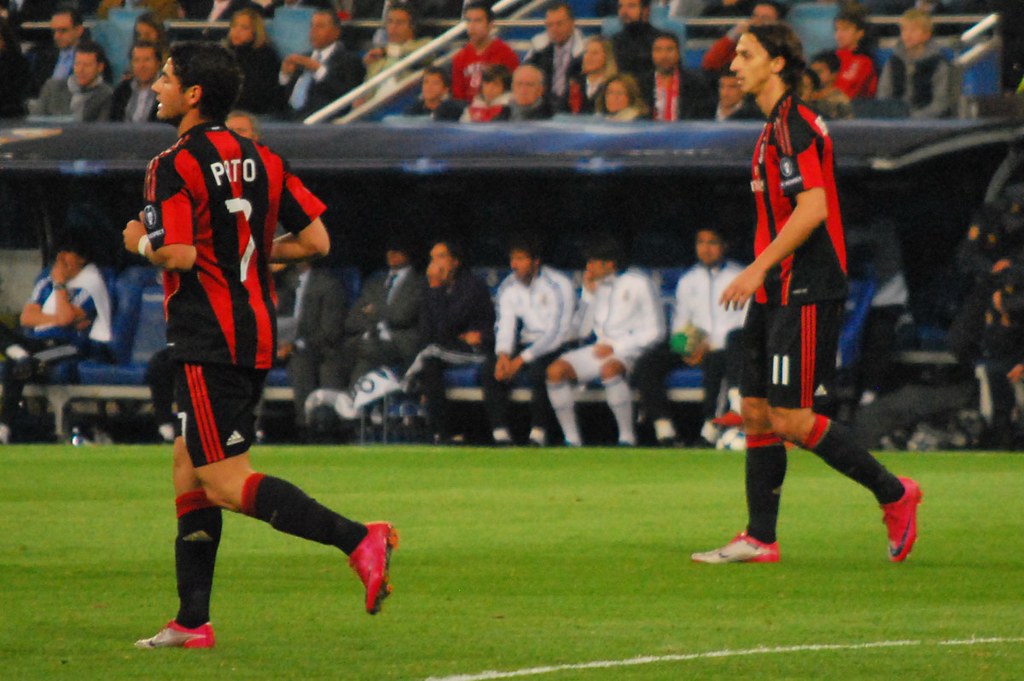 There are few things more loathed in football than the lazy player. Often construed as arrogant, they appear to against the nature of a team sport with their rejection of the hard labour of defending. Their selfishness means the rest of the team has to work harder to cover them, as if they were playing with only ten men.

A precedent was set in 1966 when Geoff Hurst was picked ahead of Jimmy Greaves for the World Cup final. Greaves had gone into the World Cup as first choice, but suffered a nasty gash on his leg, ruling him out of the quarter and semi-finals. Hurst, who had presumably only been included by Alf Ramsey as an alternate option to Greaves and Roger Hunt, was thrown in against Argentina and scored the only goal. With Greaves fit again for the final, there were loud calls for the return of England’s most prolific striker from the press, yet Ramsey held strong and Hurst scored the only hat-trick in a World Cup final.

It would be unfair to call Jimmy Greaves lazy (although the same could be said for many of the accused), but he lacked the more all-round game of Hurst, he was a specialist, and in this context, it is essentially the same thing.

Arrigo Sacchi has a famous dislike for “the proliferation of specialists” – in his system, “the regista – the playmaker – is whoever had the ball. But if you have Makelele, he can’t do that. He doesn’t have the ideas to do it, although, of course, he’s great at winning the ball.” This dislike for the likes of Claude Makelele can be reversed: if you have a Mr Lazy, he won’t win back the ball. He doesn’t put in the work to do so, although, of course, he’s great at scoring or creating. These principles of universality were imprinted on his great Milan side that won back-to-back European Cups, although, rather disappointingly for a team possessing such massive talents, it won just one scudetto.

Once Sacchi left Milan for an unsuccessful period coaching Italy, Fabio Capello took over and guided the team to three consecutive scudetti and Champions League finals, embarking on a 58-game unbeaten run that earned the side the nickname “Gli Invincibili” (The Invincibles). Rather tellingly, the side possessed two notable new players: Marcel Desailly and Dejan Savicevic. Desailly was a strong defender turned into a defensive midfielder, while Savicevic was a hugely creative if languid forward. Neither player would have played under Sacchi.

The key point is that the subjection of the individual to the collective isn’t necessary so long as there is a balance. Bearing in mind their history, it is rather appropriate then that it is Milan that appear to be embarking on some sort of experiment into how many players they can free from defensive duties.

Against Cesena, Massimilano Allegri opted for a forward line boasting three quarters of his “Fantastic Four” in Ronaldinho, Zlatan Ibrahimovic and Alexandre Pato – three creative geniuses capable of turning a match in a second, but who are going to offer little defensively.

In the usual 4-5-1/4-3-3, such as Jose Mourinho’s Chelsea, the defensive zones are fairly clear (fig.1). Each player’s responsibility is clear: if the ball comes into your zone, it is up to you to defend it. However when that front three aren’t defending, the task obviously becomes a lot harder. What were reasonably sized zones become a lot larger as the 8 other players are given the task of defending those forwards’ zones as well as their own (fig. 2). This would be a difficult task for even the most energetic of midfielders, so giving it to 32 year-old Gennaro Gattuso and 33 year-old Massimo Ambrosini was never going to work out; too often they were caught in places they wouldn’t need to be if their forwards had contributed to the defensive leg work, leaving Andrea Pirlo, a defender by zone only, alone in midfieldÂ against Cesena’s counter-attacking players.

A possible alternative could have been to have Milan’s midfield and defence sit deep, making them difficult to counter against and leave it up to the front three’s genius to score – the zones don’t get stretched because they keep their normal positions, they just ignore the opposition having the ball until they enter their territory. Except then their problem becomes how to score; although creators, none of Ronaldinho, Ibrahimovic and Pato are natural goalscorers, they need someone else to create for. Against Cesena, Ibrahimovic often held up the ball hoping for the midfielders to attack, it didn’t work and would be rendered impossible by the sitting deep proposal. Even when Filippo Inzaghi was introduced as a focal point for the attack, Milan still failed to score. Why? Cesena sat deep and compressed the space the forwards had to work in. However brilliant he is, it is unfair to expect Ronaldinho to get past seven players. The attack needed support and the midfield couldn’t give any without leaving themselves wide open to a counter-attack.

Milan were trapped between a rock and a hard place. The only way they would be able to commit men forward were if their attacking players were going to ensure they wouldn’t get caught out – they didn’t so they couldn’t.

This is the principle which underlined Sacchi’s ideas. If you control the space, you can overload the opposition in defence and attack. Sacchi’s Milan were strictly stationed with just seven metres between each band of players, keeping space for opposition players to a minimum and, when in possession, the defence and midfield close to the attack to give plenty of support. For the system to function at such a high level, the team needed defenders with the ability to attack and attackers with defensive nous. Whether this universality was a result of the system or vice versa is unclear, nevertheless what happened happened and many of the Sacchian principles are still very relevant today. 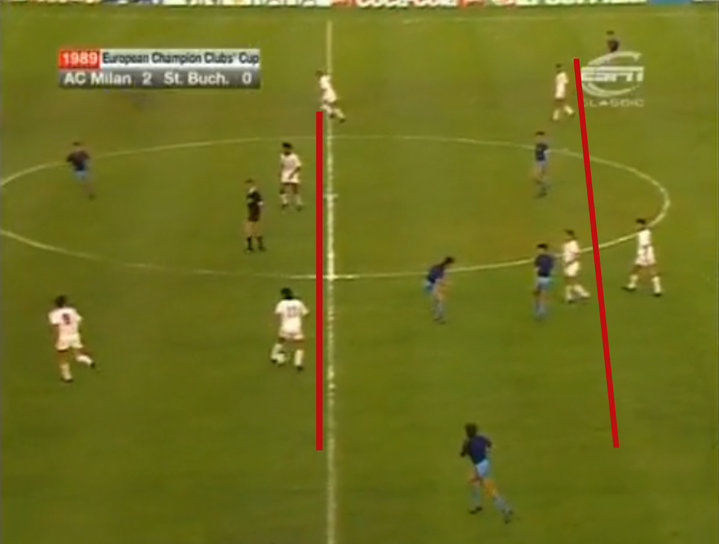 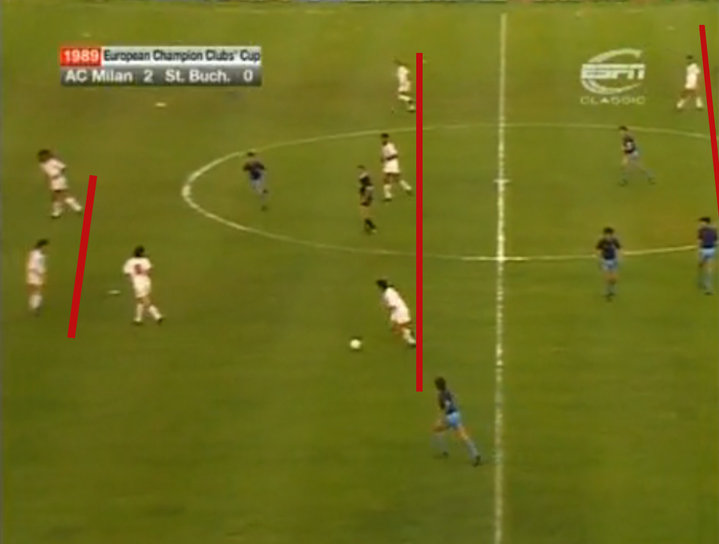 This idea of Total Football is an obvious ideal, but this kind of system is not the be all and end all – the key point to take from it is to make the pitch small in defence and big in attack – and, for all of Sacchi’s delights, he was aruably bettered by the pragmatic Capello. There’s the possibility that some talents are just worth making exceptions for. The question is who should be given this freedom.

For example, it’s been noted recently that Andrei Arshavin looked reluctant to press and harry defenders like the rest of his teammates against Sporting Braga yet emerged from the game with a goal and two assists. Could it be that his rejection of a task he probably isn’t very good at allows him to conserve energy for something he is good at and also gives him the freedom to find the necessary space to do so? That it is just the one player means there is only a small pocket of space the rest of his team needs to cover, with Milan it’s too big a workload.

I think it’s also important to point out that some players don’t necessarily need to track back to perform a defensive duty. It is rare for a defender to attack (although this could not stay as it is for long) and so the striker doesn’t really need to track back; often their defensive job, particularly lone strikers such as Fernando Torres and Didier Drogba, can be to occupy the centre-backs with their movement, ensuring they don’t get forward.

Equally, a bulky target man can do a defensive job by offering a direct outlet for the defence to simply hoof it up to, rather than giving it straight back to the opposition for another wave of attacks. For instance, Emile Heskey has long been congratulated on his ability to hold the ball up and few games show this better than his performance in England’s 1-0 win over Argentina at the 2002 World Cup – once he was substituted for Teddy Sheringham, England had no one to hold the ball up and faced an onslaught of Argentinian attacks as they continuously squandered possession.

Some players are simply so good that defenders will be unwilling to attack, which also allows them to stay in the zone where they are most effective – it would appear sometimes attack is the best form of defence. A prime example of this is Arjen Robben in the World Cup final: set up against Joan Capdevila, he pinned back the Spanish full-back and had a number of excellent scoring opportunities – Spain had little width on the left and the Netherlands had a brilliant attacker close to goal. What sets these players apart from the likes of Ronaldinho though, is that they are outstanding athletes too, bursting with pace that offers no chance of recovery if a defender gets caught out of position.

So, to come to some sort of conclusion, how many players can get away with not defending? Probably just the one, and even that could be ill-advised.

12 thoughts on “How many players can get away with not defending?”