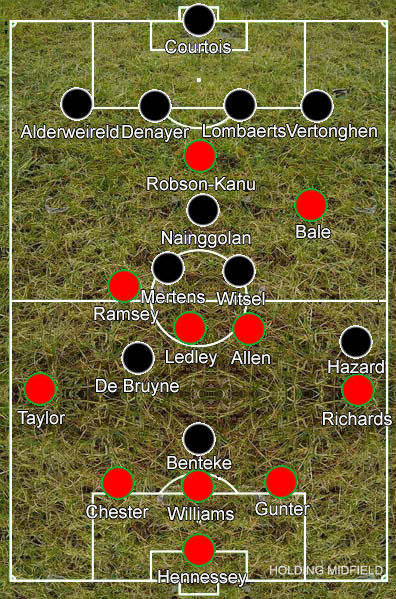 Wales’ rapid rise under Chris Coleman, thanks in large part to the groundwork done by Gary Speed, faced its biggest test against Belgium. Marc Wilmots’ team being ranked second in the world suggests FIFA heads are too busy shredding documents to sort any real comparison, but it’s a decent measure of the task at hand when Wales were outside the top 100 a short time ago.

The home side lined up in a 3-5-2 with Gareth Bale in a free-ish role on the right and Aaron Ramsey pushing left from midfield, while Belgium went for a 4-3-3 with Dries Mertens lining up in midfield.

Belgium made the better start, keeping possession although failing to force any real threat. Wales sat deeper and only really pressed when Belgium moved into their half. Hal Robson-Kanu blocked those easy passes into midfield, Bale and Ramsey pushed out from narrow positions when the ball went wide to trap the Belgians on the flanks, Joes Allen and Ledley did a good job of tracking anyone looking to drop deeper to help the Belgian defenders move it forward, while the back five ensured Belgium’s tricky attackers couldn’t stretch the Welsh defence. It was obvious at the World Cup that Belgium’s main problem is their lack of natural full-backs and Wales’ narrowness took good advantage of that: unable to play through the middle, Belgium had to look out wide but neither Jan Vertonghen or Toby Alderweireld looked comfortable pushing forward, meaning it never really moved forward – Kevin de Bruyne dropping deeper and deeper as the half went on to make things happen.

A mistake by Radja Nainggolan allowed Bale to score and a confident Wales side took control of the game. The back three made it hard for Belgium to press them and Allen and Ramsey moved around intelligently as Bale constantly looked to come inside whenever the space became available. Robson-Kanu should have doubled Wales’ lead minutes later at the end of a good passing move but they went in at half time looking strong.

Mertens was swapped for Romelu Lukaku, offering another aerial threat alongside the considerable Christian Benteke. Their gameplan for the second half was much clearer: 4-4-2 as De Bruyne stayed wider on the right and Alderweireld bombed on wherever possible, both crossing for the big strikers at every opportunity. Repeat ad nauseam. Realising it wasn’t getting them anywhere, they changed to a more patient strategy 20 minutes from the end, trying to work it into the box instead, yet they looked devoid of ideas and seemed to have given up long before the final whistle.

Belgium were unquestionably poor, but Wales were set up to make them so. The focus is rightly on Bale as Wales look set to qualify for their first tournament since the 1958 World Cup, yet it shouldn’t go unnoticed how much better the supporting cast is compared to when Ryan Giggs mysteriously injured come every international break. Swansea solidifying their place in the upper mid-table of the Premier League, and doing so playing good technical football, also bodes well for the future of Welsh football.