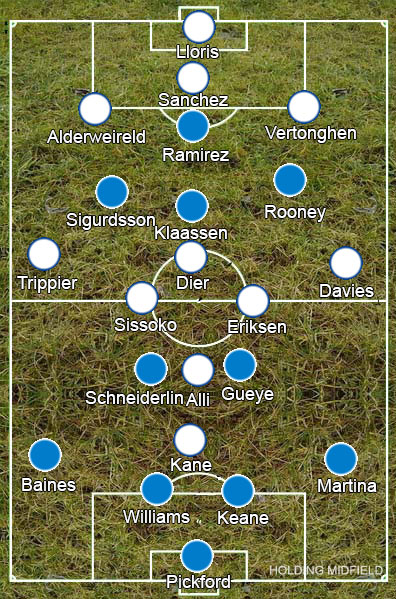 In the last decade, there’s been two distinct tactical movements that have seen the tight solid style English clubs used to dominate Europe with, lead by Rafael Benitez and Jose Mourinho, fade away in favour of a more aesthetically pleasing albeit open style. The first came with the success of Pep Guardiola at Barcelona, an emphasis on passing and possession that saw Roberto Martinez given a shot at Everton. The second, although also a part of Guardiola’s Barcelona but more associated with Germany’s fertile breeding ground of coaches, is the rabid ball-winning of counter-pressing. Mauricio Pochettino may use his own brand of counter-pressing yet in comparison to the match between Guardiola’s Manchester City and Jurgen Klopp’s Liverpool earlier in the day, the face-off between the Argentinian and Ronald Koeman on Merseyside felt like something of a throwback to a more controlled time – Pochettino giving a hard nose to a club that had previously embodied fragility, and Koeman aiming to provide solidity in the wake of Martinez’s downfall.

Tottenham started with a back three for the first time this season. Having often experimented with a 3-4-2-1 last year, here Christian Eriksen was moved a little deeper, presumably to make up for the creative shortfall at the base of the midfield due to Mousa Dembele’s injury, with Dele Alli at the tip of a diamond in a 3-5-1-1. Everton lined up in a narrow 4-2-3-1 with Gylfi Sigurdsson and Wayne Rooney either side of Davy Klaassen.

This band of three plus Sandro Ramirez ahead of them allowed Everton to push up against Tottenham’s back three and holding midfielder Eric Dier, giving Spurs some difficulty in playing out from the back. With Idrissa Gueye and Morgan Schneiderlein picking up Eriksen and Moussa Sissoko, Everton had done a good job of denying Tottenham space in the centre where nine of their players were, although Alli could find pockets of space if the double pivot moved up to meet the deeper midfielders.

Unfortunately they failed to counter the threat posed by Tottenham’s full-backs, or more specifically Ben Davies. With Kyle Walker moving to Manchester City and Danny Rose currently injured but also hinting at a move up North, there has been some reasonable concern amongst Spurs supporters over their replacements due to the specific demands required and their key role in providing width in Pochettino’s system. Kieran Trippier is a good crosser of the ball (which would have actually been useful in this game yet he rarely saw the ball), but doesn’t have the neccessary athleticism to really make it as a first-teamer under Pochettino – new signing Serge Aurier the perfect fit on field even if his character off-field is questionable. Davies’ lack of pace means it’s unlikely he’s in the first eleven long term either however his attacking input has improved a lot, with his crosses causing most of the early danger as Everton struggled to close him down. Eriksen and Jan Vertonghen also supported him well along the left flank, ensuring possession could be recycled if necessary.

Although Spurs had the better of the opening stages Everton held their own too. With their front four each occupying a defender, Cuco Martina playing one-twos with Rooney saw them able to overload the Tottenham backline. Nevertheless, these opportunities were generally wasted: rather than move around to create space and shift Tottenham’s defenders around, Everton’s attackers generally just stood horizontally in a line and waited for aerial crosses to come in, meaning the defenders’ jobs were just to head it away when it could have been much more complicated. Once Harry Kane scored a lucky opener through a misshit cross, Rooney began drifting further infield so Sandro Ramirez started pulling out towards the right to make up for the shortfall in the area – this movement made it a touch harder for Tottenham’s defenders to track the forwards, albeit also harder for Martina to get up the pitch without the guaranteed outlet of Rooney to link up with.

Tottenham doubled their lead soon after in a goal which could be blamed on mistakes by Martina or slow reactions by Everton defenders, but not really on any pattern of play from the game. Two goals down, Koeman made some changes for the second half, switching to a 4-4-2 diamond formation and bringing on Dominic Calvert-Lewin and Tom Davies in place of Ramirez and Klaassen, with Rooney pushed up to act as a striker, Sigurdsson at the tip of the diamond and Morgan Schneiderlin holding.

Perhaps it was to give each man a direct opponent in midfield or maybe it was to widen the deeper midfield to defend against the full-backs, but either way it didn’t work. Against just two forwards, the Tottenham defenders now had a spare man and found it easy to play out from the back, which in turn made it easier for the midfielders to get on the ball. With each midfielder following their direct opponent, it was easy for Tottenham players to engineer space with some movement and quick passing.

The Everton full-backs seemed to be having a tougher time than ever, confused as to whether to position themselves higher up, closer to Ben Davies and Trippier, and leave the centre-backs exposed or stay in line with the rest of the back four and let Tottenham’s wide players whip in crosses. Even if Everton’s full-backs did stay put they were so concerned by keeping a track of Tottenham’s wing-backs that they would miss midfielders making runs in behind them – Eriksen in particular caused constant problems, very good in the first half but a whirlwind in the second.

All of these issues could be seen in the goal immediately after half time: the Everton midfielders all at sea in the middle, allowing Eriksen to easily play a first time ball to Kane, him to lay it off to Ben Davies with Martina nowhere near and with no support, giving the Welshman the time to cross it back to him to finish.

It didn’t get any better from there. Although the lesser team, Everton at least were able to stand toe-to-toe with Tottenham in the first half, yet they completely lost any grip they had on the game after the break as Koeman’s changes backfired.