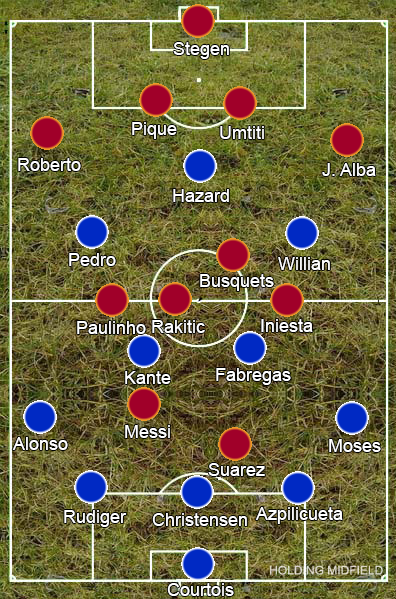 As a club that seems to try to start rivalries with every club as they don’t have any proper natural ones, it’s little surprise that Chelsea are one of few clubs that seem to have roused a rivalry with a foreign one. It started over a decade ago under Jose Mourinho with a series of controversial matches and the retirement of referee Anders Frisk, it continued with Andres Iniesta’s late goal in 2009 and it was solidified with Chelsea’s comeback on their way to their first European Cup win in 2012.

Although both strong teams, neither team are at their peak here. After a difficult summer transfer window, Chelsea have struggled in their defence of their Premier League title, with Antonio Conte appearing increasingly unsettled, while Barcelona have run away with La Liga but are more workmanlike than previous iterations, relying heavily on Lionel Messi having now lost Neymar.

Conte opted for a 3-4-3 for the game, while Ernesto Valverde chose a narrow 4-4-2, with Iniesta and Paulinho often tucking in off the wings in midfield.

Barcelona pressed Chelsea high up the pitch with man orientations. Staying narrow initially to encourage the ball to be played out to one of the wide centre-backs, then trying to pin them into the corner. For example, if the ball was played out to Antonio Rudiger, Messi would chase him down, Luis Suarez would push up to Andreas Christensen in the middle, Sergi Roberto would push up on Marcos Alonso and Ivan Rakitic on N’Golo Kante. With Messi closing him down, Rudiger doesn’t have a lot of time to think and all the easy passes are marked – the only open path is to roll the ball back to Thibaut Coutois, who would then be closed down by Suarez.

Rather than risk losing the ball close to goal, Chelsea simply hit the ball long to Eden Hazard. At 5ft 8, he doesn’t make a great target man though, meaning Barcelona nearly always recovered the ball immediately and went back on the attack, having 73% of the possession over the course of the game. Hazard would often drift to the left behind Roberto when the right-back pushed forward, but too often he would be stuck in the middle either trying to win unlikely aerial battles or receiving the ball with his back to goal which doesn’t suit him, meaning he didn’t really have much influence on the game.

Conte had Olivier Giroud on the bench who would have been better-suited to this role, but then that raises questions itself: what happens to Hazard? If he’s left out, you are leaving out your best and most creative player. If you include him out wide in the current formation, he’s expected to defend, forced deep into his own half, which probably suits him even less. Or alternatively, Conte could have gone with the 3-5-1-1 formation he’s often used this season, but then that takes another player out of the midfield with the remaining three expected to cover the width of the pitch. The choice he went for meant Chelsea posed little threat other than the direct dribbling of Willian, but the alternatives weren’t necessarily better or were at least riskier.

With Barcelona having most of the ball, Chelsea spent most of their game deep in their half in a 5-4-1 formation. Their main focus was on protecting the centre of the pitch, which was obviously a good idea as most of Barcelona’s players, including Messi, were positioned there. Hazard would generally try to block the pass into Sergio Busquets, but if the Catalan moved too high up the pitch, Hazard wouldn’t follow him.

The midfield four would remain central, ensuring the likes of Iniesta and Rakitic were covered while ensuring Messi had no space between them and the central defenders. If the ball was played out to one of Barcelona’s full-backs, the wing-back would be the man to push up onto him, so Victor Moses and Alonso had a lot of ground to cover, having to rush out from their backline to close down a player often in their own half, while the winger on their side provides them cover inside and the centre-back protection behind them.

It’s no real surprise that a team coached by Conte is good at defending, but it’s ultimately important to point out that Chelsea did an excellent job of controlling the space allowed to Barcelona – it’s not merely a matter of sitting back in lots of bodies and praying Barcelona have an off day.

Having said that, Barcelona also didn’t always help themselves. Their build-up mainly went down their left side, which is understandable with Jordi Alba and Iniesta on that flank as well as Busquets and Rakitic shifting in the centre, but then Messi was generally stood on the opposite side. The idea may have been to tie up Chelsea on the left then quickly spread it out to Messi on the right where he would have plenty of space, especially as Roberto and Paulinho were keen to push forward and occupy defenders to make him some space.

However, the result was that he was inaccessible for most of the build-up, often having to come deep into his own half to get on the ball. This was in part because of Chelsea’s excellent defending in the centre denying him space, but frankly Messi doesn’t need space – if he can pick up the ball in the final third, he can pose a threat. A few times he came across to the left, picked up the ball, dribbled into the box then tried to float a cross to Paulinho at the back post. Maybe if he had swapped sides with Suarez permanently, he would get on the ball more and it could be the Uruguayan, a more natural finisher than Paulinho, trying to arrive at the back post to get on the end of his cross.

Ultimately this didn’t happen though, and Barcelona had lots of possession but few chances. Chelsea stole the lead when Willian, who was superb throughout the game, was left completely free on the edge of the box following a corner. Barcelona then equalised not long after by pouncing on a stray pass on the edge of the Chelsea box, exactly the kind of thing Chelsea had been trying to avoid by hitting long balls forward.

Neither coach really looked to change things up, with both managers only using two of their three allotted substitutions to make like-for-like switches late in the game. It seemed to be a case of neither man wanting to commit too much and get caught out, but the away goal should hopefully lead to a more exciting second leg.