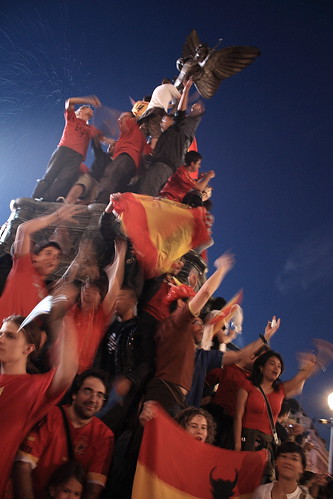 First of all, this might just be the most utterly pointless argument to have reared its head in football discussion in quite some time. What constitutes being boring is extremely subjective, and it’s not exactly something that can be changed. If something bores you, what do you do to make it interesting? Focus more on this tedious thing?

Nevertheless, there is a generally accepted template for entertaining play: passing, some level of fluidity and, to a lesser extent, pressing. All targets which Spain seem to hit comfortably – so why were they labelled boring?

What makes most possession-based teams interesting to watch is that they are making the best of their technical abilities and footballing intelligence to patiently carve out a chance. The key part to this is the chance though – there needs to be some sort of end point. Too often Spain looked like they were keeping possession for possession’s sake, as if it were some sort of goal in itself. Their build-up play isn’t simply slow, a lot of the time it isn’t build-up play at all – whether it’s in their own half or the opposition’s, their goal of simply keeping the ball didn’t seem to change.

There’s a quite noticeable difference between football and piggy-in-the-middle that Spain didn’t quite seem to grasp at Euro 2012, which quite possibly makes it the purest form of anti-football you’re likely to see: they didn’t attack themselves, but they wouldn’t let the opposition have the ball so that someone could attempt to play football.

Their problem wasn’t just their mentality though. Much was made of Vicente del Bosque’s decision to not bother with a striker throughout the tournament, yet him opting for a double pivot had the larger effect. The choice between Xabi Alonso and Sergio Busquets is a difficult one for Del Bosque – an enviable case of having too many world class players. Alonso is the more talented and creative player, yet lacks the mobility to play the holding midfield role by himself, requiring Busquets next to him. Busquets is more mobile and has an understanding with Xavi and Andres Iniesta, making him the more logical choice, although that would mean leaving out Alonso, one of Spain’s best players.

Regardless, there was only really space for one of them. Ordinarily, a team who has both full-backs get forward like Jordi Alba and Alvaro Arbeloa does require a double pivot, but opposition generally play so defensively against Spain that one defensive midfielder would be enough. With both Busquets and Alonso playing, there is one less player able to play in that attacking midfield zone, leaving them outnumbered against the heavily-manned defences. It also renders Xavi pretty useless as he likes to drop deep and collect the ball – with the double pivot he’s forced to play higher, where he can’t play his normal game.

Still, Spain’s lack of a striker often was a problem. Not because playing with a striker is inherently bad, as great-example-of-why-some-people-shouldn’t-be-allowed-to-talk-about-football John Cross suggested in between Fernando Torres jokes (seriously, how can someone complain about the lack of a striker while laughing about how that team’s most established striker isn’t very good? How is that sort of disconnect in logic possible? He is paid to talk about football. This is how arguments in favour of eugenics start), but because it requires that you make up for a lack of a number nine by switching the focal point or providing that point through runs. With David Villa not able to get fit in time and Torres off-form, going strikerless made sense, although only Cesc Fabregas ever managed to provide the directness to make it successful – anyone else simply carried on the passive going nowhere passing that caused the “boring” backlash.

The final perhaps should have enflamed debate rather than settling it: why were they not more attacking earlier in the tournament when they were capable of doing that? This Spanish side put itself in record books, but did so with its worst incarnation. The team that won Euro 2008 played the attractive tiki-taka passing game, yet their 4-4-2 shape forced them into getting the ball forward. They had been put among the favourites but as perennial underdogs their opponents weren’t too scared of them, meaning they didn’t have to face huge defensive blockades. Opponents’ defensiveness meant Spain couldn’t be as entertaining in South Africa, but at least they tried to be. The 2012 version weren’t necessarily boring – they certainly could have been a bit more fun though.

5 thoughts on “Are Spain boring?”