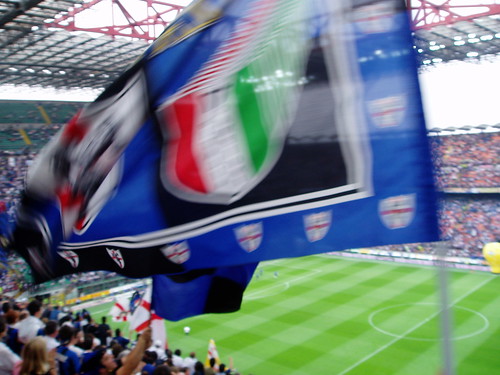 The long term readers among you might notice that this isn’t the first time we have discussed Helenio Herrera’s Internazionale side. Seeing as we have already discussed this Inter side’s tactical set-up, there is little need to cover old ground, so we will look at some of the other reasons people believe they achieved greatness.

First, a caveat – all these allegations are exactly that: allegations. Ultimately, nothing has been proven, and it would be wrong to judge the team without proof. It should also be noted that despite his greatness, Herrera is a very dislikeable man, and it shouldn’t come as a surprise people have tried to discredit him.

However, the context of the time must also be taken into account. There was little many could do to expose any corruption – Brian Glanville attempted to reveal widespread match-fixing by Italian clubs in his book The Golden Fix and found himself universally shunned by Italian football.

Glanville isn’t the only one to criticise Herrera’s methods. Former Inter player and brother of star man Sandro Mazzola, Ferruccio, claimed â€œHerrera provided pills that were to be placed under our tongues. He used to experiment on us bench players only to later give them to the first team players. Some of us would eventually spit them. It was my brother Sandro that suggested me that if I had no intention of taking them, to just run to the toilette and spit them. Eventually Herrera found out and decided to dilute them in coffee. From that day on “Il CaffÃ¨ Herrera” became a habit at Inter.

â€œI don’t know for sure [what was in the pills] but I believe amphetamines. Once, after a CaffÃ¨ Herrera, it was prior to a Como vs Inter (1967), I suffered 3 days and nights in a state of complete hallucinations, just like an epileptic.â€

In 1969, young forward Giuliano Taccola suffered with a fever and high heart rate, but Herrera continued to play him until he injured his ankle against Sampdoria. Two weeks later, he had a seizure in the dressing room after Inter’s game against Cagliari and died before the ambulance could get him to a hospital – his heart failing due to pneumonia. The clear disregard for the health of his player aside, Herrera had been directly to blame for the death of Taccola according to Mazzola, doping him too.

As well as Taccola, Mazzola has pointed to the other suspicious deaths of many of the side, including captain Armando Picchi and Carlo Tagnin, while hinting at â€œfixed matches and bribed referees, especially in Cup tiesâ€. Liverpool manager Bill Shankly was not overly fond of Herrera for this reason, especially amid suspicions of Inter bribing referee Jose Maria Ortiz de Mendibil for the second leg of their clash in the 1965 semi-final.

Tommy Smith was so angry with the refereeâ€™s decisions he chased him off the pitch. “We started okay, holding our own for 20 minutes, then they were awarded a free-kick 20 yards out. To this day I can still see the referee holding his arm up to signal an indirect free kick. Next thing we knew their left-half, Mario Corso, pops up and chips the ball straight past Tommy Lawrence.

“I’m not saying any of the Inter players were on the fiddle, but the fact is the ball didn’t touch anyone and the referee was adamant it was a goal. We remonstrated with him but he just ran back to the centre circle saying ‘goal, goal, goal’.

“Their second was just as bad, if not worse. Lawrence had the ball in his hands and as he bounced it to kick it clear, Joaquin Peiro crept in from behind him to nick the ball and roll it into the net.

“I remember being with the England squad in Belfast when George Best did the same to Gordon Banks, and the goal was disallowed. But not in Milan. So we are 2-0 down and 3-3 on aggregate. Ian St John then scores and there’s nothing wrong with it, but the referee chalks it off for offside. At this point I’m starting to think there’s no way we are going to win this tie.

“Giacinto Facchetti scored a great goal, their third and the winner. But it was what had gone on before that riled me. I was only 20 at the time and to be robbed of a place in the European Cup final by a referee like that made me so angry. Needless to say, I had a few words with him [Ortiz de Mendibil] afterwards, but he didn’t want to know. He didn’t even break his stride as I followed him off the pitch.” Inter went through, winning 4-3 on aggregate to the disgust of Shankly.

There was another famous game in 1961 where Herrera put out a youth side, who were destroyed 9-1 by Juventus, in protest of a ruling by the federation which had cost Inter the league. It worked – Inter got better treatment from then on.

The fact that two of the other sides on this list proved their greatness by defeating Herrera’s Inter shows the standing in football the side had. They took the catenaccio system and perfected it, but that doesn’t mean the other elements of their win-at-all-costs mentality should be completely overlooked.