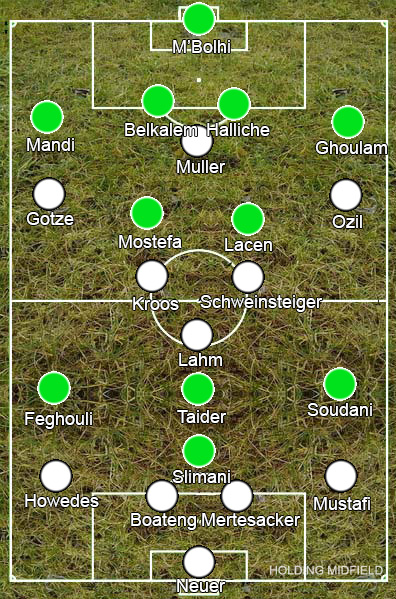 Although Algeria had excited against South Korea, the expectation here was that they would revert back to the defensive strategy shown in their opening game against Belgium. A dull cat and mouse affair awaited as the sterile Germans passed and passed around the heavily-staffed Algerian defence. Instead, they became the first team to really expose the German fragility (although Ghana made a reasonable effort).

Vahid Halilhodzic once again made a number of changes from the Algerian team that drew with Russia, while Shkodran Mustafi came in for the ill Mats Hummels Mario Gotze returned for Germany after the win over the United States.

Algeria were strong defensively. They sat back in their own half and welcomed Germany forward, tracking them deep and communicating excellently to ensure there was no gaps, but they were also proactive in winning back the ball. There were obvious triggers for Algerian players to press intensely – a heavy touch or awkward body shape from a German player would result in a swarm of Algerian players seizing on the opportunity to snatch the ball back.

Germany were squeezed out of the game in possession, whereas Algeria dealt far better with the German pressing – partly through technical quality and partly because they always had the option to hit it long for Islam Slimani. Christian Atsu’s pace had constantly caught out Benedikt Howedes against Ghana and the high German defensive line proved a massive problem for them here. Slimani was able to outpace Per Mertesacker and Jerome Boateng to any ball played in behind, so Germany were completely reliant on Manuel Neuer racing 30 yards out from his goal-line to sweep up before the Algerian striker could run onto it. While Germany were unable to move the ball forward effectively, Algeria were breaking dangerously every time they picked up the ball.

Germany gained a greater footing in the second half mainly due to Algeria no longer pressing as intensely, with Halilhodzic presumably playing the long game and wanting to conserve energy, yet the match remained an even contest as it headed into extra time.

The one area Algeria had looked weak in was defending crosses, with Rais M’Bolhi forced into a good stop by a Thomas Muller header in the second half. It was this that saw them concede the opening goal – Muller scraping a ball across goal for substitute Andre Schurrle to finish. Bizarrely, the Germans didn’t try to sit back and protect their lead though, and Algeria still had the massive space behind the slow German defensive line to break into. The problem now was that they were too tired so no longer had the significant pace advantage over the high German line needed to put them one-on-one with Neuer as they had so often in the first half.

Mesut Ozil sealed the win when Algeria had thrown the majority of their players forward in search of a goal and Abdelmoumene Djabou’s volley came too late for them to mount a serious fightback.

Algeria join Chile and Mexico as another fun team knocked out of the competition by a dull giant in the round of sixteen. We can only hope those still left in have been taking notes whilst eyeing up die Nationalmannschaft.