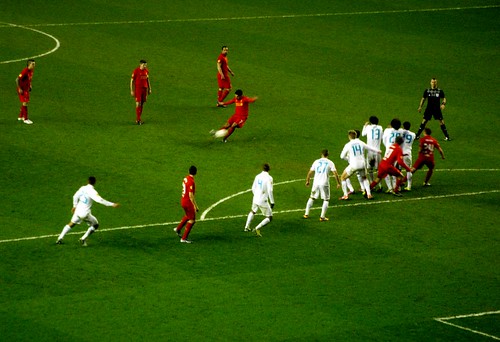 With all the gloomy seasons of recent years, Liverpool’s current second place positioning seems like a long-awaited break in the clouds. After grinding away in mid-table, the substantial climb that’s left them only behind the champions-elect a reasonable distance into the season doesn’t quite add up. That sort of jump usually comes from some kind of reshuffle or major upgrade, yet Liverpool don’t actually appear to have improved on last season’s performances.

At times they have toyed with the opposition mercilessly, leaving them still chasing shadows when the ball’s already hit the back of the net, but then they did last season. Liverpool’s issue was never breaking down the sizeable number of teams racing to see who could finish lowest, it was in competing with the teams around and above them that were able to take advantage of the huge, glaring problems in the team. Just like the attractive dismantling of lesser teams, those problems remain with the side this year.

Three clean sheets in the opening games of the season suggested some defensive progress, but it was only really against an appalling Manchester United side that Liverpool actually limited chances rather than simply not conceding. Their longest run without a clean sheet in eight years following that game seemed a better representation of how Liverpool were actually performing than the early results, which isn’t a particularly positive appraisal of the Â£30+ million spent on the defence this summer.

It would be easy to say that those players clearly weren’t good enough, but that isn’t true. His decline overstated, Pepe Reina was more than likely still a better goalkeeper than Simon Mignolet, yet the only significant difference between the two is Reina’s ability with his feet, which, while an odd move to make considering Brendan Rodgers’ passing philosophy, isn’t a defensive issue. Kolo Toure is surprisingly back to his best after a decade, stepping ahead of strikers to snatch at the balls being played into their feet with an aggression rare from a 32 year-old, and Mamadou Sakho gives a stronger, more physical option albeit with less comfort on the ball than his teammates.

Given the defence is looking individually strong, Liverpool’s defensive weakness must arise from elsewhere. The obvious candidate being the soft belly in front of it: a midfield that gets caught out the second it comes up against anyone half decent. Once one of the strongest areas on the pitch for Liverpool, the likes of Xabi Alonso, Javier Mascherano and Raul Meireles gave way to Charlie Adam. When Rodgers took over, this was one of the areas that drastically needed sorting out. In came Joe Allen and Nuri Sahin, yet neither got a proper chance to help mend Liverpool’s midfield woes. The reason for this is quite simple: playing as the lone man in a 4-2-1-3, Steven Gerrard had a terrible start to the season, so, rather than drop him, Rodgers opted to move him back into the holding pair where he would have more space to pick out passes and his newly-developed lack of mobility wouldn’t be quite so apparent.

Joe Allen was ditched from the midfield after a positive start to his time at Liverpool, his drop in form coinciding with Gerrard being moved backwards. Likewise, Lucas Leiva hasn’t been quite so applauded since his return from injury, with many suggesting he wasn’t up to the task after all. The issue is that no one is up to running a midfield by themselves and it takes a special kind of cognitive dissonance to think Lucas is the bigger problem to the balance of Liverpool’s midfield than the player alongside him.

While Gerrard has at long last developed some decision-making ability, willing to make short passes to keep play moving rather than surrendering possession with a 50 yard pass any time he picks it up, his lack of any defensive positional sense remains.

The loss of his athleticism means that spot in front of the back four is the place to get the most from his attacking abilities, but that comes at a great defensive cost. Whoever sits alongside him has the unenviable task of doing the defensive work of two, worsened last season by Rodgers’ bizarre insistence on the defence sitting deep despite none of the players suiting it and this season Liverpool regularly giving up control of the game once they have taken the lead to sit back and protect it. After another miserable start to a season, excellent displays against the frankly pathetic likes of Fulham aside, the question of how long exactly Liverpool can stick with a player who unbalances them to such repeatedly catastrophic levels is looming larger by the game. Bookmakers such as bwin may be forced to shorten their odds on Liverpool’s title hopes should their fine form continue.

Gerrard’s place in the side isn’t simply a footballing matter however, it’s a political problem for Rodgers too. Post-Benitez, Gerrard and Jamie Carragher, all things taken into account, have probably done more damage to Liverpool than good. From the beginning of 2009 onwards, Carragher was barely worth his place in the Liverpool side, but his limitations and errors were absolved by “organisational needs” and a variety of other excuses few other, more deserving players would be given the courtesy of because he was considered a legend. When Kenny Dalglish finally dropped him from the side, his loss was barely felt, with Daniel Agger and Martin Skrtel proving themselves to be a far more capable partnership.

Gerrard is in a similar untouchable position. The idea that Gerrard has limitations is rejected by the talking heads; even when his bad positioning has gifted control of the midfield to the opposition, he is still frequently named man of the match. When you are the martyr that has given up his chance at glory for the club, the idea that you are also somehow to blame for that lack of success doesn’t fit in the narrative, even if both are true. Gerrard isn’t Carragher though. Whereas Carragher was a mediocre player for the majority of his time at Liverpool, Gerrard is a deserving club legend and, unlike Carragher, does actually offer something to this Liverpool side. Lucas, Allen and Jordan Henderson all add much greater security to the midfield but none would offer the passing range of Gerrard. Whether or not this is worth unbalancing the team is for Rodgers to decide but what is clear is that it simply doesn’t work when they come up against a capable team, which means he must find a way of making it work if he wants any success.

The team started the season in a 4-2-2-2 formation and returned to it with Philippe Coutinho’s return in the second half of the Arsenal match and the thrashing of Fulham. It’s broadly the same as the 4-2-3-1 used last season but with Luis Suarez pushed a bit higher upfield. It’s made Suarez more of a threat to the opposition defence, already racing to the top of the scoring charts despite missing the first five games, although Daniel Sturridge, who flourished as a lone frontman making space for Suarez to work in between the lines with his running, has seen his form dip a little from his near-perfect start to the season now the Uruguayan is more of a striking partner. Coutinho is more than capable of linking play in that space vacated by Suarez, looking harder to track when drifting in from the left than starting centrally, while Suarez moves out towards the right to offer some width. The box formation does nothing to solve the holding issues though, which means the inclusion of Jordan Henderson on the right is necessary to add some energy to the midfield. While Henderson’s impressed, particularly in his endless willingness to provide an outlet, running the length of the pitch frequently, there are more technically proficient players that could be occupying that space if the duo behind him were more mobile.

The change to a 3-4-3 again did nothing to solve the midfield issues, but it does shore up the defence a touch more by throwing an extra man into the mix and allows them to keep width with Victor Moses floating from wing to wing. The 3-5-2 made the most sense for the players available: Sturridge and Suarez were given free rein up front, Rodgers could make use of several of his new array of centre-backs (although the exclusion of Agger made little sense given he is the best on the ball) and the midfield problems are lessened when a switch to a triangle puts less emphasis on Gerrard’s positioning. As Arsenal so easily exposed, with Glen Johnson’s injury troubles, Liverpool don’t really have the wing-backs to make it work though and, even if they did, it doesn’t have any role for Coutinho.

Whether it is them becoming a more cohesive unit or the quality of the league dipping further, Liverpool have found themselves in a promising position eleven games in. What is required of them if they actually wish to improve hasn’t changed though, and hasn’t done for quite some time.

2 thoughts on “Where do Liverpool progress from here?”