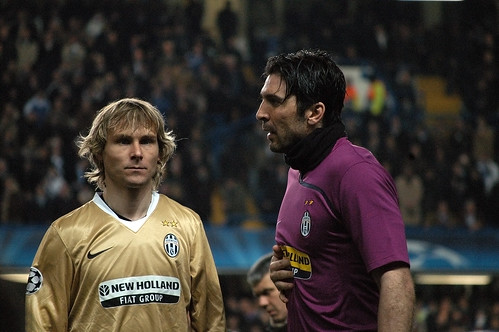 It may have taken the extreme depths and European embarrassments we are currently seeing for everyone to catch on to the fact that the Premier League is pretty terrible at the moment, although it’s lacked real quality since 2011, but there’s little greater evidence of quite how far it’s fallen than the creeping possibility of Serie A taking its fourth Champions League spot. The issue goes beyond simply dropping into the second tier of leagues – Serie A hasn’t actually improved, the Premier League has simply got that much worse.

Calciopoli marked the beginning of the end, but Serie A fell behind due to the riches flooding elsewhere. In the wake of Roman Abramovich taking over at Chelsea, the Premier League overtook Serie A in the mid 2000s with a flood of new coaches and stars from abroad, the brilliance of Pep Guardiola’s Barcelona and the arms race it began to keep up in Madrid had a knock-on effect further down in Spain, while the Bundesliga has benefited from its focus on youth and a new generation of talented coaches, making it the hotbed of tactical innovation that Serie A traditionally was.

Once the ban after Heysel ended England’s hold on Europe, Italy took its place at the head of the footballing table – for two decades Serie A was indisputably the best league in the world by a distance we may well never see replicated, but once that came to an end little has been done to get the league back on its pedestal. The money flowed to England meaning Italy was unlikely to attract stars, yet there’s been little of the forethought to create their own that’s led to Germany’s success. Since Calciopoli the only thing to really change is Juventus replacing Internazionale as the club monopolising Italian football.

Nearly a decade on, it’s worthwhile to remember just how good Serie A was. Carlo Ancelotti had been part of Arrigo Sacchi’s AC Milan side – the first truly great team to usher in this era – and used what he had been taught in an impressive spell as coach of Parma, earning a switch to Juventus. The methods didn’t translate as smoothly and Ancelotti found himself sacked at half-time on the final day of the 2001 season despite still being in with a chance of winning the scudetto. The Milan job was him rebuilding his career as a top coach – he didn’t deserve to be as unpopular as he had been at Juve, but the struggle taught him that he needed to be more flexible, resulting in the far more pragmatic and hugely successful coach we see today.

Fabio Capello had learned this lesson much earlier. The arch-pragmatist had taken over Sacchi’s Milan side and sapped much of the fun out of it, but made them near-invincible in the process. Four scudetti, three European Cup finals and a 58 match unbeaten run was enough for Real Madrid to give him a shot, although a league win wasn’t enough to spare him the sack when they realised the kind of football he played. Nevertheless, Roma wanted the glory Capello all but guaranteed and he actually managed to do it in style for once, winning the 2001 scudetto using an exciting 3-4-1-2 formation. 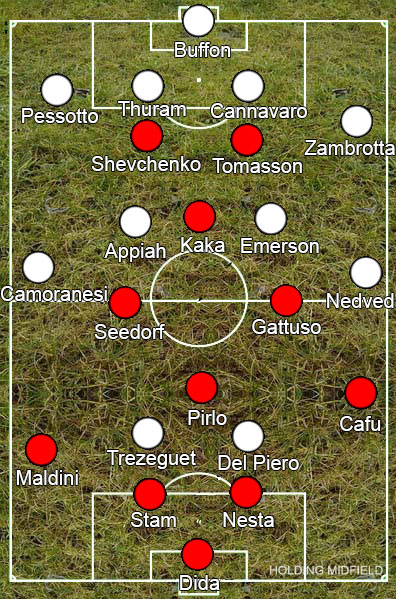 By the time of this encounter, Ancelotti had shown himself worthy of managing the top Italian clubs, winning the league the year before and the Champions League in 2003, yet Capello could probably be considered the superior manager at this point. Jose Mourinho and Rafa Benitez’s moves to England meant the Premier League was on an upwards trajectory, but with Barcelona some years away from their peak under Guardiola and the Galactico project leaving Real Madrid unbalanced, Juventus and Milan were the two best teams on the planet. Italian football was so packed with talent that they even had the world’s best referee, Pierluigi Collina, presiding over the match.

Ancelotti went for the 4-3-1-2 system that allowed him to pack Andrea Pirlo, Clarence Seedorf and Kaka into the team alongside two strikers, whereas Capello lined up in a flat 4-4-2, with Emerson and Stephen Appiah making a slightly less exciting midfield pairing than their opponents. Despite this, it was Juve who were finding it easier to build.

To ensure they didn’t get outnumbered in midfield by Milan’s diamond, Juventus narrowed their midfield, squeezing the space Milan’s playmakers had to work in but opening up the flanks for their full-backs. Paolo Maldini got up and down well for a 36 year-old, but it was Cafu – only 34 – that this really benefited, pushing high down the right. To counteract this threat, Gianluca Zambrotta positioned himself much closer to Cafu, frequently stepping out of defence into midfield to meet him and generally staying wider than a full-back usually would.

Zambrotta isolating himself from the rest of the defence like this wouldn’t typically be recommended, yet Milan did nothing to punish it. Stationary Jon Dahl Tomasson stayed in the middle as expected and having Gennaro Gattuso overlap would be pretty pointless. Kaka rarely made any diagonal runs to link up with Cafu but Emerson and Appiah were holding close to the back four anyway, so the few times he did Juventus were covered well. Milan’s brightest spell was when Andriy Shevchenko switched sides with Tomasson mid-way through the first half, looking to dart into this gap rather than pulling wide and looking for long balls in behind as he had been doing on the left, but it only lasted about 10 minutes before he was back on his starting side.

The result was that Cafu was never able to get to the byline or put in decent crosses as Zambrotta was always on hand to stop him, rendering Tomasson useless and mostly forcing Cafu to play it backwards as the centre was too busy.

It can actually be seen in the build up to the goal: 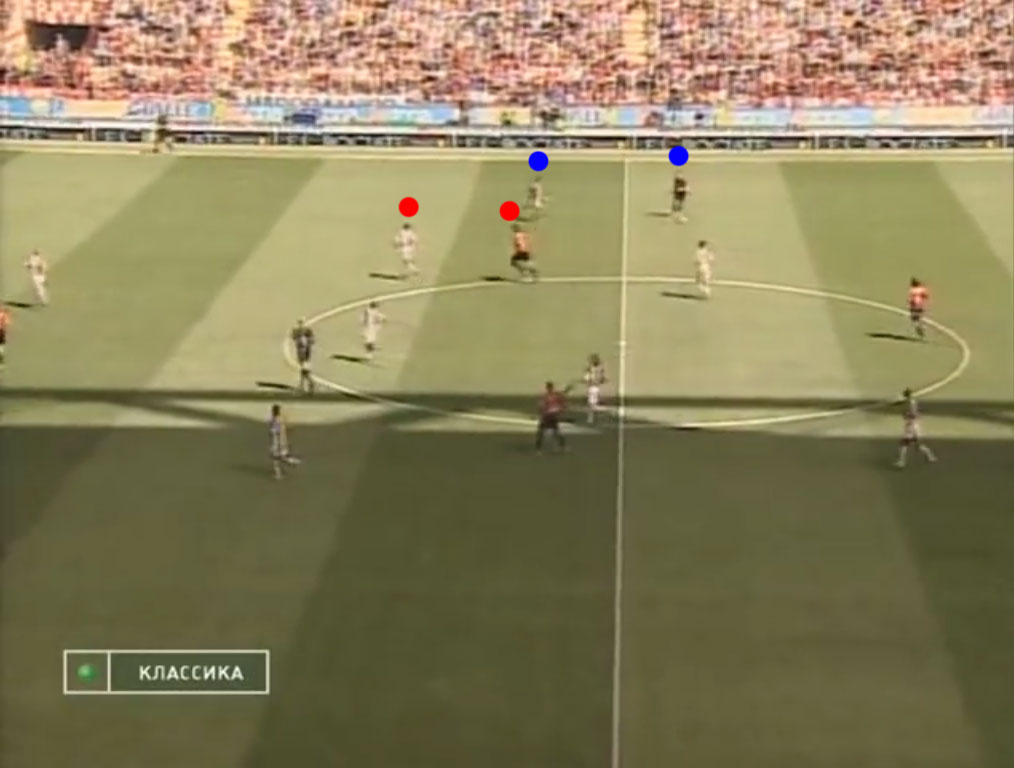 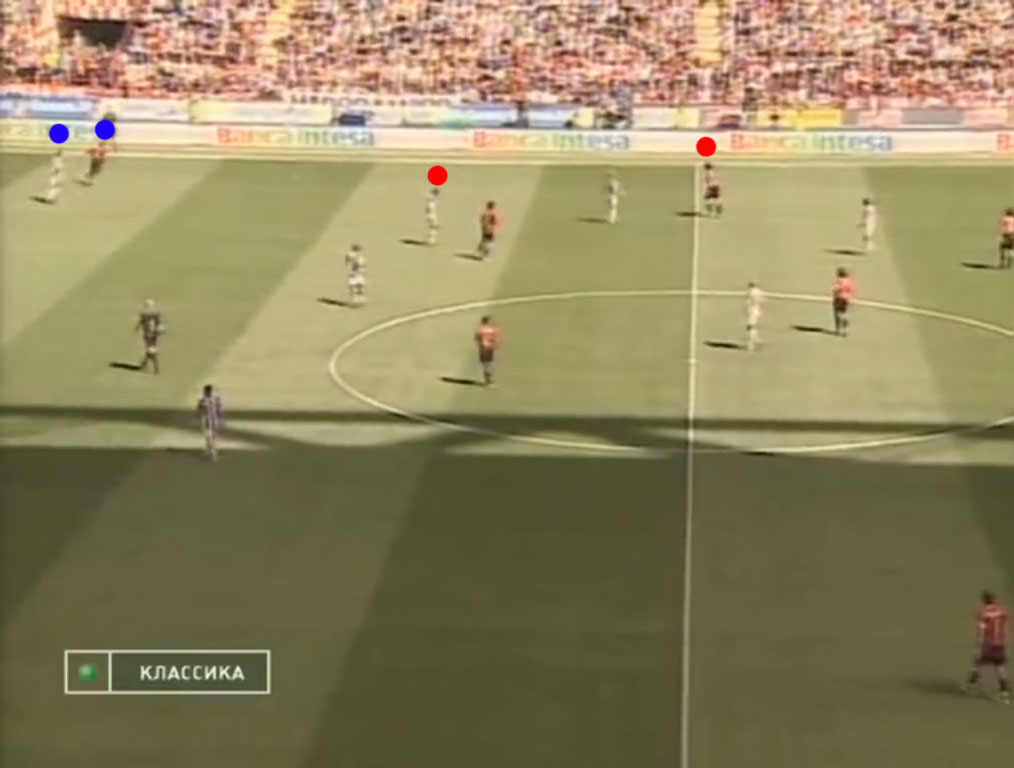 Cafu runs on while Zambrotta keeps close, as Kaka drops deep to get on the ball and Emerson holds his position. 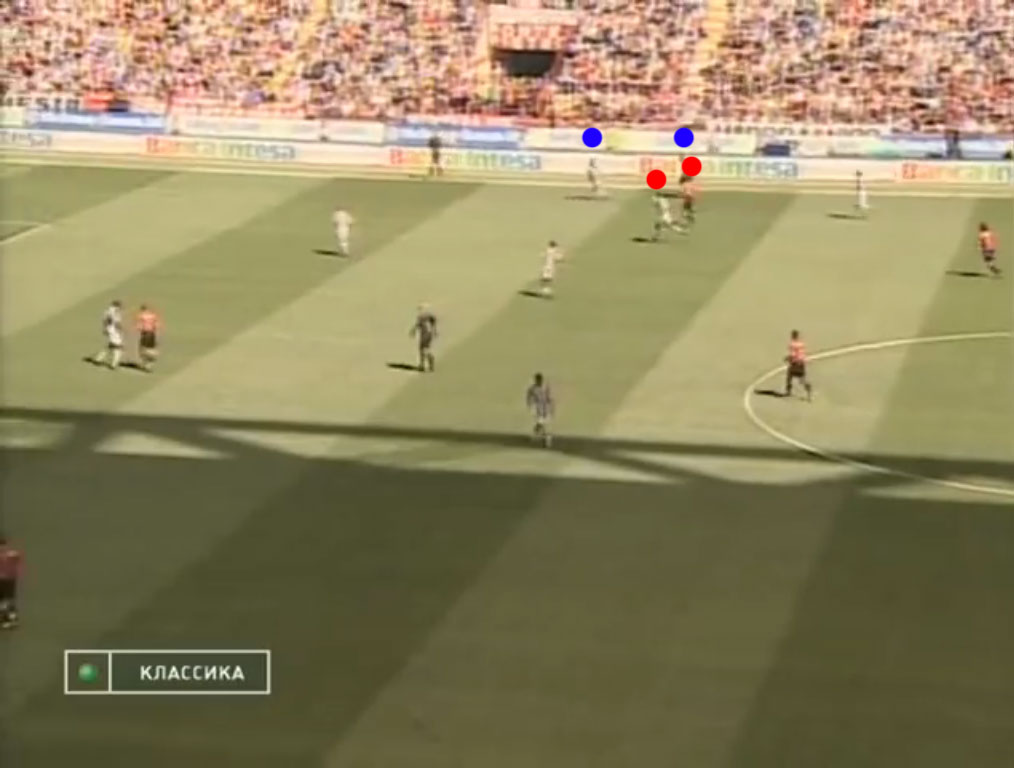 Kaka moves the ball out to Cafu and looks to run on, but Emerson is on hand to cover. Unable to get anywhere linking up with his countryman, Cafu sends in a cross that is easily dealt with and Juve counter down the left, catching Cafu high up the pitch. The covering Alessandro Nesta clatters Pavel Nedved, but the ball rolls on to Alessandro Del Piero – Milan actually do well to quell the threat, giving them enough time to get men back to cover, yet some brilliant invention from Del Piero sets up David Trezeguet for an easy header.

Juventus didn’t account for all of Milan’s creative players though: it was the job of Del Piero or Trezeguet to pick up Pirlo at the base of Milan’s midfield, but they were frequently slow to do so, and yet it had little effect on the game. This was due to Pirlo putting in a truly terrible performance: his long balls forward were frequently overhit, he spent a lot of time in positions where he couldn’t get on the ball and often went back to his centre-backs rather than play easy balls forward.

He was having problems defensively too. Considering the attacking talent on display, it should be a bit of an oddity that Appiah was the best player going forward early on in this game. Him and Emerson sticking to the toes of their centre-backs meant they would pick up the ball in deep positions and Pirlo had to push forward to meet them. Appiah would play a simple one-two with one of the wide players and burst past Pirlo into the space he had just vacated and, never blessed with pace, the Italian had little hope of making up the ground.

Part way through the first half, it was noticeable that Nedved was now taking up central positions more often. It was a very simple move, but ultimately brilliant: Nedved would do greater damage using the space that Pirlo left than Appiah would, yet it would also take him out of direct competition with Gattuso. With little to offer going forward, Gattuso’s job was solely to stop Nedved and Zambrotta combining down the left, but Nedved going central nullifies his role.

Pirlo was substituted at half-time, replaced by Serginho as Milan switched to a 3-4-1-2. With Serginho and Cafu at wing-back, the gameplan was about stretching Juventus as much as possible – they were content to sit back in two banks of four so the game from here on out was simply an exercise in whether or not Milan could break them down. Shevchenko was now much more free to drift as he pleased and Tomasson soon made way for a more mobile striker in Filippo Inzaghi, meaning Zambrotta had to tuck in closer to the rest of the backline than he had in the first half so Cafu now had more space. Seedorf had been Milan’s best player in the first half but he found himself replaced by Manuel Rui Costa, whose ability to dribble past players was handy in getting the ball forward.

They ultimately never got close to breaking down Capello’s defence though, managing just two shots on goal all game, and the three points all but sealed Juventus’ scudetto win (which would admittedly later be taken off them after Calciopoli). Milan’s season was still alive however, heading to a Champions League final in Istanbul as favourites against Rafa Benitez’s Liverpool. Not that that quite went to plan either.