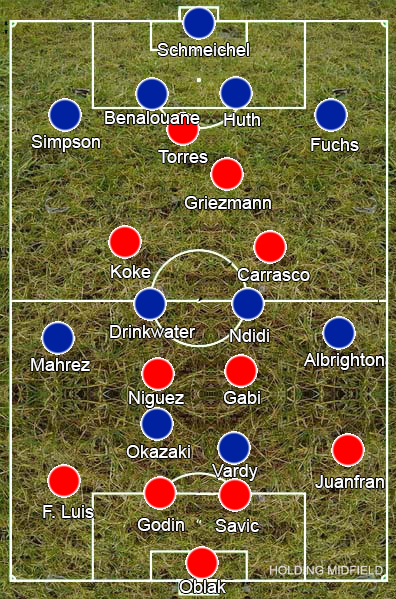 There’s a clear link between Atletico Madrid and Leicester City, but also a distinction that came to the fore as they clashed in the Champions League. Diego Simeone’s men toppled the giants of Real Madrid and Barcelona in 2014 to emerge as La Liga champions playing a battling style based on a resolute defence and quick direct attacking, while Leicester went from battling relegation to Premier League champions playing a conservative game built on a sturdy defence and quick counters. One obviously inspired the other and while it’s clear that Leicester was the better story, Atleti are the better team.

Both teams lined up in a 4-4-2 formation, but, while Leicester stuck to their usual conservative direct game, Atletico were more patient in their build-up which has brought them mixed success in recent seasons.

To break through Leicester’s fist line of defence, Atleti formed a makeshift back three: Juanfran would push up high on the right and the remaining members of the back four would stretch out across the pitch, with Stefan Savic pulling out to the right touchline. Jamie Vardy and Shinji Okazaki were unable to cover the full width of the pitch and so it rarely troubled the defenders to get the ball in to Saul Niguez and Gabi deep in midfield. With the forwards bypassed, the centre-backs would tuck in again and Felipe Luis would venture forward as usual.

The second phase of Atletico’s build-up evolved around trying to draw out Leicester’s midfielders to create space between the lines for Atleti’s attackers to make use of. While Yannick Carrasco stayed wide right for the opening few minutes of the game, Koke and Antoine Griezmann were staying central, trying to pop up behind Danny Drinkwater and Wilfred Ndidi, and it didn’t take long for the Belgian to come in off the flank and join them.

Niguez and Gabi in particular were circulating the ball deep in midfield, trying to slip the ball through the gaps to the attacking midfielders but more often than not having to go wide. The game followed a clear pattern in Atletico matches where they dominate but fail to get the clear-cut chances you would expect from that domination.

Much of that was due to Leicester, despite obviously being outplayed. The deep defensive line of Atleti left no space for Vardy to make use of his pace in behind and all their attacks were just long balls up to him and Okazaki, which even if they did win the initial aerial duel, would fall straight back to Atletico defenders, with that strong base of Diego Godin and Savic protected by Niguez and Gabi deep ahead of them. Okazaki would initially drop a bit deeper to defend but ended up pushing up alongside Vardy part-way through the half – neither strategy worked and the pair were impotent both in attack and defence. Riyad Mahrez failed to have any influence on the game, rarely getting any time on the ball, but quickly wrestled down whenever he did hint at getting free.

Nevertheless, while Atleti had complete control of the ball, Leicester were pretty resilient defensively. While big and strong in the air, Leicester’s centre-backs aren’t particularly mobile, so Atleti’s gameplan seemed to be based around trying to force them out of position and manoeuvring space so their quick attackers could get at them. Niguez and Gabi’s deep positioning required Ndidi and Drinkwater to come out and confront them or risk giving them free rein – Atletico players frequently raining down long shots on Kasper Schmeichel’s goal to ensure Leicester knew they had to close them down. Nevertheless, while they did manage to stretch out the space between the lines, Atletico players were frequently too slow in combining in these areas, with only Griezmann really making the one-touch passes needed to ensure Leicester didn’t have time to recover. There was also rarely quite enough space for the attackers to actually dribble at the heart of the defence either though, so Robert Huth and Yohan Benalouane didn’t have to risk leaving the safety of their deep positions to cover.

The result was that most of Atletico’s attacks ended up coming from crosses, with the midfielders sending it out to the full-backs and the respective winger and Griezmann shifting across to combine so Juanfran or Felipe Luis could get the necessary room to send it in. It rarely worked as this was exactly what Leicester’s defenders wanted, able to clear crosses away all day, but also because Atletico’s attackers rarely made threatening runs. There’s a case to be made that if Atletico’s widemen had worked to get in behind and send in low driven crosses across the face of goal they could have got some real chances but even that would have required better runs from the forwards, although this problem may be lessened by the likely returns of Kevin Gameiro and Sime Vrsaljko in the second leg, especially with Huth out.

Atleti did get their lead through a dubious penalty, but it came from a pretty devastating counter that showed how much more comfortable they are with quick direct play compared to the more patient style the match required. Carrasco was the clearest example – excellent at getting the ball into Leicester’s half quickly when they were able to counter, but dwelling too long on the ball when he had less space to work with.

Andy King replaced Okazaki at half-time to help Leicester gain some footing in midfield but it had no effect, with the game continuing as it had before. With Atleti dominating completely but failing to break Leicester down, the match was at an impasse. The goal means that the tie isn’t though: Leicester will have to come out and attack at the King Power stadium or they will go out, and that will suit Atleti down to a tee.